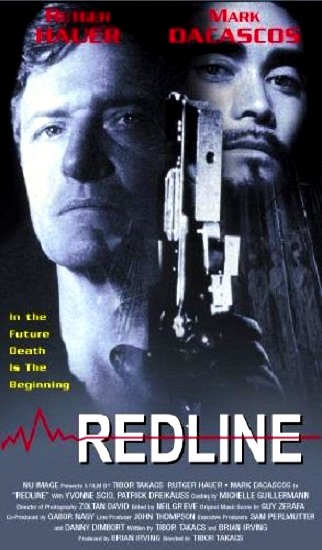 John Anderson Wade is shot and left for dead by his partner Merrick during an operation smuggling contraband into a near-future Russia. However, Wade is revived from the dead by the special police prosecutor on orders of The President. Allowed to escape, Wade heads after Merrick, who has been trying to take over Moscow’s crime syndicates, seeking revenge. As he pursues Merrick, Wade finds himself caught in games between The President, the Special Prosecutor and the crime syndicates.

Like a number of films around this period – The Russia House (1990), GoldenEye (1995), The Saint (1997) – Redline takes a post-Soviet Russia as its setting. Tibor Takacs creates an abundance of atmosphere in the milieu of a Russian Mafia-dominated underworld – journeys through bathhouses, street markets, chic nightclubs, sports clubs where naked contestants engage in combat – suggesting both at once a world of decadence and near-anarchy. The interiors, shot in cavernous, Soviet Politburo-styled buildings, add a dazzling sense of verisimilitude – even if, ironically, Redline was in fact shot in Hungary.

Set amid this are some neat science-fictional devices – flying spy satellites, virtual reality torture, advertisements for Hawaiian holiday resorts in Crimea. Although by and large, Redline does not seem that interested in its Cyberpunk background – writers like William Gibson, Neal Stephenson, Jack Womack or Bruce Sterling would have had field days with this milieu. In fact, with little rewriting, the plot could have easily have worked as a standard action film without the need for any future setting.