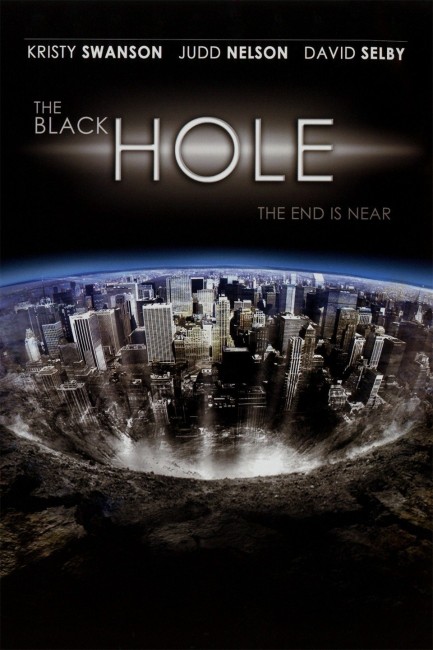 At the Midwestern Quantum Research Laboratory in St Louis, an experiment goes wrong, creating a black hole. The former project head, the burned-out Dr Eric Brice, is hurriedly brought back in. Viewing the tapes, Brice discovers that a creature made of electricity appeared at the same time as the black hole and killed two guards. The creature breaks out of the laboratory, following the power lines that lead to the city’s main plant. At the same time, the black hole bursts out into the streets, sucking everything down into an increasingly larger vortex. The military want to detonate a nuclear weapon to destroy it but Brice knows the energy discharge will only make the black hole grow larger, as well as cause untold destruction to the city. He takes a riskier route of trying to lure the electricity creature back into the black hole.

The concept of the black hole is a rich one that offers an extraordinary range of mind-bending ideas. Indeed, most of ideas that have come out of astrophysics and quantum physics regarding black holes in the real world are more mind-boggling than anything science-fiction writers have ever come up with. On film though, the black hole is a severely underdeveloped concept that has been seen as little more than a big vortex that sucks everything down into it. The first black holes on screen appeared in episodes of tv series like Doctor Who‘s The Three Doctors (1973) where a former Time Lord had created an extravagant revenge scheme that involved sucking most of the universe down into a black hole, or Black Sun (1975), one of the better episodes of Space: 1999 where The Moon was drawn into a black hole where the crew met God and the Moon passed on unharmed. On film, there was The Giant Spider Invasion (1975) where a black hole caused a giant spider to appear; and Disney’s The Black Hole (1979), which is no relation to this The Black Hole, where a mad scientist attempted to make a journey through a black hole and appeared to travel into the afterlife. Probably the most credible of these was The Void (2001), which reads as a slightly more scientifically accurate version of this film about an experiment to create a black hole that goes amok.

Of all the conceptual possibilities inherent in black hole theory and that have been toyed with by science-fiction writers – super-gravitational mass, singularities, time dilation, potential gateways to alternate dimensions and other parts of the universe – it is truly disappointing that The Black Hole 2006 has chosen no more than to make a monster movie. In fact, there is incredibly little that goes on in The Black Hole that is in any way supported by real physics. People come within walking and driving distance of the gravitational vortex without experiencing any time dilation effects (in actuality, as they approached within its’ gravitational influence (ie. with millions of kilometres), time would have started to slow down to the point it would appear to stop altogether as one approached the event horizon).

More importantly, there is no more pressure drawing them in than say being caught in a hurricane. In reality, a black hole is so super-heavy that not even light can escape (hence the name ‘black’ hole) and even a singularity the size of thimble would suck out the centre of the Earth. A black hole the size of the one here would almost certainly be drawing the rest of the Earth and even the Moon down into it, akin to water going down a bath plughole.

All that we have here is a novelty monster movie where the titular black hole plays so little importance it could be replaced by a dimensional vortex or a magical cupboard for all that it is of any difference to the story. For that matter, the electrical monster never gets up to much either. There are at least some competent effects of the monster on the rampage and the city being sucked down into the vortex. The film cannily feeds these through handheld video or tv footage in order to hide the low-budget.

Elsewhere, we get the cliches of the monster/catastrophe film – the mass panic of civilian evacuation, the rogue scientist hero who is the only one who understands the nature of the menace, the authorities who fail to heed his warnings, the scientist taking a lone risk to save the day just as the military prepare for a course of ruthless action that could have disastrous consequences.

The film is at least convincingly cast in Judd Nelson who does the wide-eyed eccentric scientist with some conviction. Kristy Swanson makes a stunning babe scientist in lab coat and demurely hidden behind glasses but is never given much to do throughout.

Director Tibor Takacs is a Hungarian emigre who is based in Canada. Takacs has made a number of other genre films including the obscure Metal Messiah (1978) about a futuristic rock star; The Gate (1987) and its even better sequel Gate II (1990) about children unlocking a demonic gateway; I, Madman/Hardcover (1989) about a madman emerged from a book; Redline/Deathline (1997) set in a near-future Russia; the bizarre Nostradamus (2000) about a time-travelling occult war and the attempt to reincarnate the title character; the Christmas films Once Upon a Christmas (2000) and Twice Upon a Christmas (2001) about Santa’s daughter; the monster movies Rats (2003), Mansquito (2005), Kraken: Tentacles of the Deep (2006), Ice Spiders (2007), Mega Snake (2007) and Spiders (2013); and the disaster film Meteor Storm (2010).