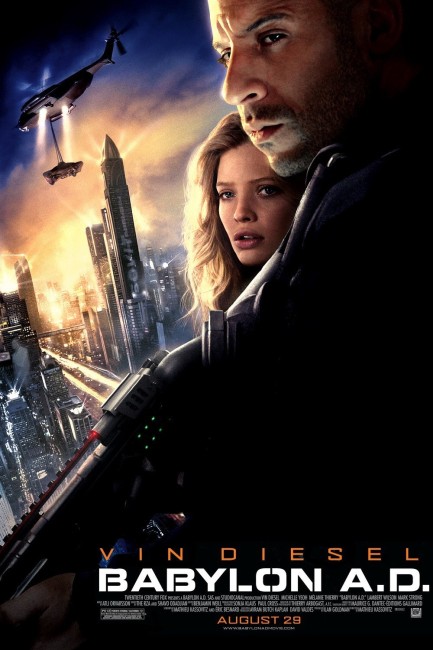 Some time in the future. In Russia, the mercenary Toorop is forcibly requested by the underworld kingpin Gorsky to escort a ‘package’ to New York. Toorop picks his consignment up from a Neolite convent in Mongolia. This proves to be Aurora, a girl in her teens, who is accompanied by one of the nuns Sister Rebeka. Aurora has never been out of the convent in her life and one of Sister Rebeka’s requests is that Toorop help protect her innocence from the wider world. They travel across the Bering Strait and into Canada to enter the US. All along the way they are pursued by heavily armed forces that want to abduct Aurora for their own purposes. During the journey, Toorop comes to see that Aurora has powers and abilities that are more than human.

France may well be one of the few countries that are keeping Cyberpunk cinema alive. One of the most influential films appears to increasingly have been Luc Besson’s The Fifth Element (1997) whose fusion of Cyberpunk action and vision of a messianic teen waif certainly informs Babylon A.D.. In recent years we have seen other French Cyberpunk outings with the likes of Banlieue 13 (2004), Immortal (ad vitam) (2004), Renaissance (2006) and Chrysalis (2007).

French director Mathieu Kassovitz emerged out of nowhere with his second film La Haine (1995), concerning itself with violence in French minority neighbourhoods. Since then, Kassovitz has frequently dabbled in genre films with the likes of The Crimson Rivers (2000), a serial killer thriller that develops out into a plot about Nazi eugenics programs, and then headed to the US to make the Halle Berry ghost story Gothika (2003) for Dark Castle. Babylon A.D., Mathieu Kassovitz’s sixth feature film, was a venture into Cyberpunk cinema. Kassovitz subsequently went onto make the historical film Rebellion (2011), although appears to have fallen silent since then.

Babylon A.D. accrued a degree of controversy even before it opened. Mathieu Kassovitz was vocal in interviews about his dissatisfaction with the finished film. He claimed that 20th Century Fox had interfered throughout shooting and even dictated the way that he shoot scenes. After Babylon A.D. was completed, the studio cut his original version of the film from 161 minutes down to 101 for European release and by a further ten minutes when it came to the US release. Kassovitz went so far as to call the finished film “like a bad episode of 24 [2001-10].” The studio did little to promote Babylon A.D., opening it without critics’ previews – despite which it went to the top of the box-office charts on its opening weekend.

To their credit, Babylon A.D. is serviceable and certainly watchable film. In fact, I suspect I actually enjoyed it somewhat more than Mathieu Kassovitz did. There is an attention grabbingly showoffish opening shot where Kassovitz’s camera zooms all the way down from in orbit around the Earth into extreme closeup on Vin Diesel’s eye in which we see a reflected explosion, before his narration throughout the scene ends with the announcement: “Too bad today was the day I died.”

The first few scenes are classic Cyberpunk – Vin Diesel walking through rundown shantytowns in some future Russia, negotiating to buy what looks like the carcass of a cat in a market, returning to his apartment to cook it and then sit down to eat, before a troupe of heavily armed mercenaries burst in, to which Vin reacts with indifferent cool, before erupting into action to kill and settle a score with the leader of the group and then surrendering to the others.

You are certainly drawn into Mathieu Kassovitz’s vision of the future – a burned-out Russia where people live in shantytowns; designer backgrounds and vehicles, including airliners that are painted to promote Coke Zero; littered Cyberpunk gadgetry in the background, notably Vin Diesel’s nifty digital map; and the arrival at New York City, which is sort of like a low rent Blade Runner (1982) future with skyscraper-sized commercials, ads laser-projected onto the sky and cabs with exterior digital displays.

The future courier/bodyguard story is one that we have seen in other works like Cyborg (1989), Johnny Mnemonic (1995) and Children of Men (2006). As has been noted elsewhere, Babylon A.D. has a number of passing similarities to Children of Men, notably the almost divine status of the girl being escorted who carries the hope for the human race’s future in her pregnancy. The character of Aurora seems first cousin to the super-powered lost waifs that we have in The Fifth Element‘s Leeloo or Summer Glau in Firefly (2002-3) and Serenity (2005).

Certainly, the action sequences never take over and dominate the show to the exclusion of all else as Mathieu Kassovitz’s comments tended to indicate. One was expecting something like Total Recall (1990) or The Island (2005) where bludgeoning and mindless action supplanted what might have otherwise been an intelligent plot. There are only a handful of action sequences – the cage fight in the nightclub, the snowmobile chase through the Canadian wilderness, the shootout and bike action at the climax.

Of course, it is hard to tell exactly what Kassovitz had originally intended these to mean – he has made comments to the effect that each action sequence was not a kinetic boiler-plate sequence but part of a spiritual journey for the characters. The most intriguing sequence – and the one that would seem to come the closest to Kassovitz’s vision – is the race to get aboard the Russian submarine that emerges from beneath the ice, Melanie Thierry’s shock at seeing other refugees simply abandoned in the water and the sudden emergence of her ability to intuitively know how to do things as she tries to turn the submarine around.

That of course brings us to the ending, or at least the last fifteen minutes or so of the film, which takes a total dogleg into muddle-headed mysticism. Again, it is hard to tell what ended up on the cutting room floor and what didn’t, but when we get to Lambert Wilson’s explanation about what is going on, the show takes a nosedive into the preposterous from which it fails to recover. We get [PLOT SPOILERS] the revelation that Aurora (Melanie Thierry) has been genetically engineered by her father (Lambert Wilson) as the messiah for his wife (Charlotte Rampling)’s church and that somehow her pregnancy means a great deal for the human race. Exactly what is not at all clear. And why the church seem to be trying to kill her when she is supposed to be their messiah is also unclear.

For that matter, it seems confusing why the church give Melanie into Vin Diesel’s hands to deliver to safety, then spend the rest of the film trying to kill/retrieve her when they had her in the first place. There is mention made that she could possibly be a viral weapon but this idea is dropped as soon as it is raised. The end where Vin is left raising the children (who for twins both confusingly seem to be of different races) and departs with the cryptic comment “there’s a storm coming” explains nothing at all. Babylon A.D. is a film that virtually sits there on its knees as you walk out begging for a director’s cut to clarify everything.

Babylon A.D. may have been the opportunity for Vin Diesel to climb back up from his career lull over the last few years – he may even yet earn our forgiveness for xXx (2002) and The Pacifier (2005) – but it is still a role where Vin just gets to serve up the same tough and gravel-voiced Vin we have seen through every other role he has done. About all that Vin does to show that he has acting range is grow his hair to stubble length rather than go bald this time. The fine Michelle Yeoh is cast opposite him but suffers from being given few chances to do anything.

The main problem is that nobody present gets much of an opportunity to develop their characters. There are a couple of scenes with the three in a tent in the Arctic wastes and one where a half-clad Melanie Thierry suddenly comes onto Vin Diesel but they feel out of place because they only seem like points where the film is stopping for Requisite Character Development Scene and the rest of the film never seems concerned with digging any deeper into their characters. Melanie Thierry has a lovely beauty but the role is such an enigmatic and unexplained one that she never gets the opportunity to show us anything either. An almost unrecognisable Gerard Depardieu has fun as a Russian mobster.