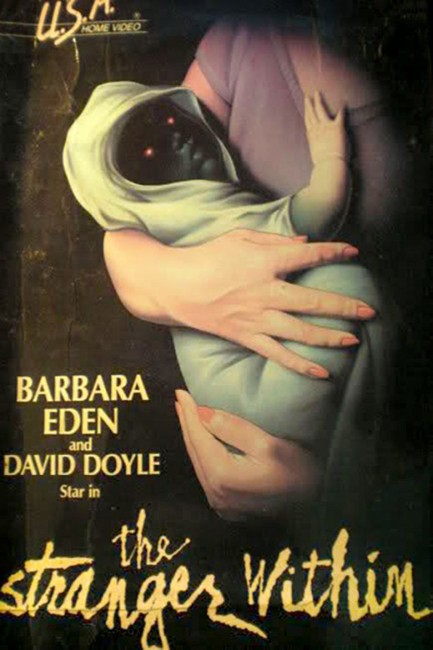 English professor David Collins returns home to his wife Ann, an artist, who announces to him that she is pregnant. David cannot understand how this can be as he had a vasectomy. He accuses her of cheating, which she denies. Ann decides she wants to have the baby. However, as the pregnancy continues, David observes that Ann’s behaviour is becoming increasingly more erratic – she drinking vast amounts of coffee, placing copious quantities of salt on all of her food and talking in an alien language.

Richard Matheson (1926-2013) was a genre writer with a long history. Matheson had come to fame as a novelist – in particular he wrote the original I Am Legend (1953) novel – and then as a screenwriter with The Incredible Shrinking Man (1957) adapted from his novel, followed by a number of episodes of The Twilight Zone (1959-63) and a host of Roger Corman’s Edgar Allan Poe films beginning with The House of Usher (1960). (See bottom of page for a full list of Richard Matheson’s scripts and adaptations).

If there was decade when Matheson was hot, it was surely in the 1970s. This was the Golden Age of Horror Television and an era that produced a number of classic works. Matheson wrote a lengthy list of these including Steven Spielberg’s first film Duel (1971), The Night Stalker (1972) and its sequel The Night Strangler (1973), the tv adaptation of Dracula (1974) with Jack Palance, Scream of the Wolf (1974), the classic anthology Trilogy of Terror (1975), Dead of Night (1977), The Strange Possession of Mrs. Oliver (1977) and the mini-series adaptation of Ray Bradbury’s The Martian Chronicles (1980).

It doesn’t take too much of a stretch of the imagination to see The Stranger Within having been construed as an extension of these predominating themes. Barbara Eden gets inexplicably pregnant. (Rather amusingly, much of the consternation in the early parts of the film is on the part of her husband George Grizzard who does not understand how she can be pregnant when he had a vasectomy). We have seen the malignant pregnancy that Mia Farrow underwent in Rosemary’s Baby and the possessed Linda Blair in The Exorcist so it is to no particular surprise when Barbara Eden starts following suit and having mood swings and talking in a strange language.

The surprise about the film is what starts seeming like a horror film in the Rosemary’s Baby vein suddenly turns into a science-fiction film. Richard Matheson adapts the film from his short story Mother By Protest (1953) and it is revealed partway through that Barbara Eden has been impregnated by aliens. These are causing her to undergo strange mood swings, which seem to consist oddly enough of piling salt on everything she eats and drinking copious amounts of black coffee – something that you suspect inspired the comedic scenes in Invaders from Mars (1986). The end of the film resembles Village of the Damned (1960) with all the mothers emerging with their children – which makes this one of the first films on the theme of alien impregnation.

Lee Philips was a regular tv director of the era whose career spanned from the 1960s to the 1990s, although he never had a theatrically released film. He made occasional other ventures into genre material with another horror tv movie The Spell (1977); Salvage (1979), the pilot movie for a subsequent tv series in which junk collector Andy Griffith builds rocket to The Moon; and the James Michener-adapted tv mini-series Space (1985), which tells a fictionalised account of the Space Program.

Lee Philips’ direction is exactly what you would expect from the hiring of a tv director who had not handled a genre film to this point. He is someone who has an idea of when suspense and atmosphere should occur and sets assorted shots up but remains entirely mechanical in his handling of them so that no real atmosphere is generated. This is a film with a suitably paranoid tone but its tepid handling causes it to emerge as far less than it is capable of being.