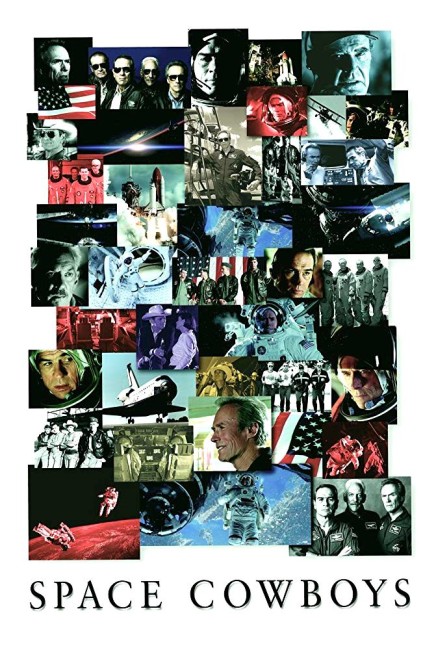 In 1958, the four Air Force pilots that form Project Daedalus – Frank Corvin, Hawk Hawkins, Jerry O’Neill and Tank Sullivan – are cheated from their opportunity to become the first men in space by the decision to send a monkey instead. In the present day, Project Daedalus’s tightass head Bob Gerson is now a NASA director. NASA is ordered to assist the Russians in preventing the orbital decay of an aging communications satellite. However, the old Skylab systems that the satellite uses are so antiquated that nobody knows how to fix it, excepting Corvin, the original systems engineer. Gerson reluctantly recruits Corvin, now a retired senior citizen, who determines that the only way to repair the satellite in the 31-day timeframe is for he to go into orbit and do the job personally. He insists that the old Project Daedalus team be reunited for the mission. Gerson agrees but on the condition that the four of them meet the physical requirements. Corvin reunites the team and they set about training. However, they have reckoned without Gerson’s treachery and the Russians who have not exactly been truthful about the nature of the satellite.

Since the early 1990s, Clint Eastwood has emerged as a director of some sophistication. Eastwood has been directing since the 1970s and had turned out some decent directorial efforts during this time including Play Misty for Me (1971), High Plains Drifter (1973), The Eiger Sanction (1975), The Gauntlet (1977), Firefox (1982) and Bird (1988). In the 1990s, Eastwood bid goodbye to Dirty Harry and spaghetti Western type films and took everybody’s breath away with stunning anti-Western Unforgiven (1992), which netted Eastwood both Best Directing and Acting Oscars that year and still remains his single best film. Unforgiven marked a newfound maturation of Eastwood as a director and he has since produced such fine and awards acclaimed efforts as A Perfect World (1993), The Bridges of Madison County (1995), Absolute Power (1997), Midnight in the Garden of Good and Evil (1997), Mystic River (2003), Million Dollar Baby (2004), Flags of Our Fathers (2006), Letters from Iwo Jima (2006), Changeling (2008), Invictus (2009), J. Edgar (2011) and American Sniper (2014).

Space Cowboys was probably inspired by the publicity surrounding John Glenn’s trip back up into space in 1998 at the age of 77. The film’s basic concept is that of “old geezers in space.” The script has to twist and contort some improbable plot devices in order to set itself up – American design systems on a Russian satellite, people having the design schematics for the satellite without somehow managing to work out that it is a weapons platform, nobody else in the world being able to understand the system except Clint Eastwood’s character, and NASA agreeing to a far-fetched scheme of reuniting the original team (exactly why Eastwood needs to have all of them reunited is never entirely made clear).

Once there however, the film gets a surprising amount of mileage out of the concept. Most of the oldster jokes have been around longer than the accumulated age of its stars but both Eastwood and his cast deliver them with assurance. The cast, to a person, give fine performances. It is when Space Cowboys gets into orbit, during the latter third, that the film comes into its own. Industrial Light and Magic’s effects here are excellent – you do get a sense of the aloneness and immensity of space – and the accumulating onboard problems during the space scenes are grippingly directed.

The amusing thing about the film – you can tell from the title Space Cowboys – is how it reiterates the view begun with The Right Stuff (1983) that astronauts are a special breed of people who are irascible, rule-breaking and anti-authoritarian by nature. The film’s plot is not too dissimilar from Armageddon (1998), albeit conducted with considerably more sophistication. Both films feature a group whose services are needed by NASA for a vital mission. In both films, NASA is portrayed as being run by tightass bureaucrats (perhaps a reflection of the sad state of the real world space mission) and the people needed to do the job are seen as rugged individualists who can bend the rules, do things by the seat of the pants, give the finger to tightass bureaucrats and, above all, do it their way.

Clint Eastwood’s other works of genre interest are:– the female stalker psycho-thriller Play Misty for Me (1971); the supernatural avenger Western High Plains Drifter (1973), the hi-tech fighter plane heist Firefox (1982), the psycho-thriller Blood Work (2002), Changeling (2008), a true-life story about a missing child, a police cover-up and a serial killer, and the afterlife character drama Hereafter (2010). In acting appearances, aside from all the aforementioned, Eastwood has appeared in Revenge of the Creature (1955), Tarantula (1955), the talking mule film Francis in the Navy (1955), the twisted Southern Gothic horror The Beguiled (1971), up against a serial killer in his most famous role Dirty Harry (1971), the S&M psycho-thriller Tightrope (1984) and the Dirty Harry film The Dead Pool (1988).