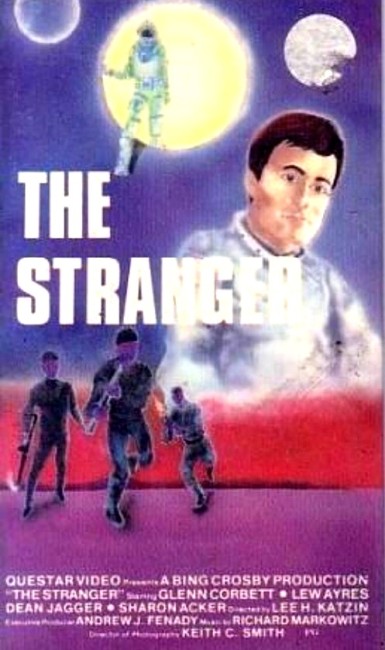 Neil Stryker is commander of NASA’s three-man Pilgrim space mission. As they begin their return journey, the capsule goes out of control. Styker wakes up in a hospital back on Earth. He then finds that he is being held prisoner and that his doctor lacks knowledge of many basic facts about Earth history. Stryker makes an escape to discover that he is not on Earth but a parallel world known as Terra that exists in an orbit on the opposite side of the sun to Earth. This world there has been united under a totalitarian regime known as The Perfect Order, which maintains strict control. Stryker is listed as a wanted fugitive and pursued by George Benedict and the security forces. With the aid of various others, Stryker seeks to find a way to get back home.

The Counter Earth theme has a history that goes all the way back to the astronomical musings of Greek philosophers such as Aristotle and Philolaus. The post-Ptolmaic abandonment of the Earth-centric universe caused such claims to die away, although they have found renewed interest in the 20th Century with UFO believers and online conspiracy theorists. With the idea having been rendered nonsensical by modern astronomical science, Counter Earths fail to appear in much in the way of literary science-fiction. The theme has however found popularity on film. The first appearance was planet Mondas in the Doctor Who episode The Tenth Planet (1966), a former twin Earth that was home to the Cybermen in their first appearance. The idea received full flowering in the Gerry Anderson film Doppelganger/Journey to the Far Side of the Sun (1969) wherein astronaut Roy Thinnes lands on what he thinks is Earth only to find that everything is in mirror reverse. The nonsensical idea that Earth has a twin planet where everything happens in tandem was also alive and well in recent years in Another Earth (2011), which received some reasonable festival acclaim, and Lars von Trier’s Melancholia (2011).

The Stranger is essentially Doppelganger recycled as a tv movie. The only real difference is that after arriving on the Counter Earth, astronaut Glenn Corbett (who also appeared in Star Trek (1966-9) as the original Zefram Cochrane) finds himself on the run from a totalitarian state as opposed to on a mirror Earth. Most science-fiction films have some aspect where you are just required to switch off logical considerations and suspend your disbelief; there are others that it gets in the way of your even getting started. The Stranger is one of the latter.

I was perfectly willing to extend the idea of a planet in a Counter Earth orbit but the idea that everything there would also evolve in tandem is ridiculous. Lew Ayres has a speech where he tries to rationalise this and only ends up digging a hole that is even more nonsensical. If the changes go so far back that there was no Paul Revere and no Florida, then it would be absurd to expect that history have still adhered to the modern world so closely as to have identical vehicles, clothing styles and that everyone still speaks American English. The further back you go in history for your divergence point, the wider the differences are going to be.

The other failing of The Stranger is that it seems like a series of half-ideas slung together without any clear idea of how they were going to be developed. In terms of the Counter Earth idea, nothing more is done with it beyond the initial scenes with Glenn Corbett in hospital. For the rest of the film, the script has appropriated the idea of a standard totalitarian society and simply becomes a science-fictional variant on The Fugitive (1963-7) with Glenn Corbett on the run pursued by lawman Cameron Mitchell as he tries to find a way back home again. There is nothing interesting or distinctive about the totalitarian society. The dramatics as Glenn Corbett tries to flee and break back in to the space centre are all typical pieces of canned action from tv shows of the era. Surprisingly, the film reaches an unresolved ending with Corbett failing to hijack the rocket that would take him back to Earth and joining a group of travellers after washing up out of the surf on a beach. Clearly, the filmmakers were hoping that the pilot would have gone to series but it never did.

One of the surprises about the film is that it is co-produced by Bing Crosby Productions, a company that had a surprising number of genre credits during this era including Willard (1971), Arnold (1973), Terror in the Wax Museum (1973), W (1974) and The Reincarnation of Peter Proud (1975). Andrew J. Fenady was a tv producer, then known as creator of the show The Rebel (1959-61) and producer of Branded (1965-6). Fenady dabbled in several genre tv movies with Black Noon (1971) and The Woman Hunter (1972), and combined with Bing Crosby Productions for the theatrically-released Arnold and Terror in the Wax Museum.