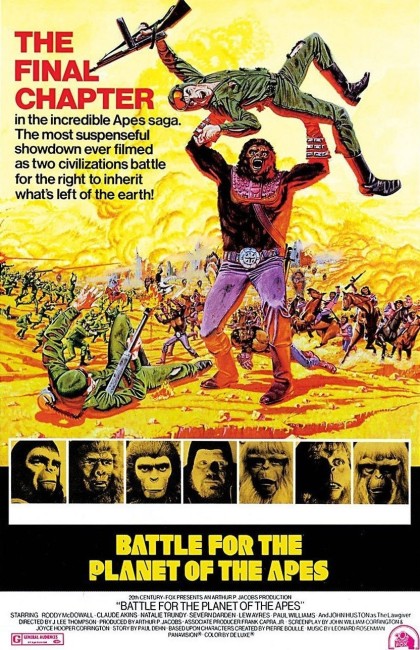 Most of civilization has been destroyed in a nuclear holocaust. The surviving apes and humans live in a tenuously peaceful co-existence led by Caesar, although the gorilla general Aldo mutters rebellion. Caesar is obsessed with trying to obtain knowledge about the future that his parents predicted. Caesar, his friend Virgil and the human MacDonald set out on a journey to one of the ruined cities in search of surviving records. Instead, they succeed in stirring up the mutant survivors who declare war on the apes.

After four worthwhile films, the Planet of the Apes series starts to show the creative strain here with Battle for the Planet of the Apes. The plot creates far too many elements to juggle – the strained ape/human relationship, the gorilla insurrectionists, a return of the mutants from Beneath. Moreover, there seems to be an entire film missing in between Conquest and Battle for the Planet of the Apes – Conquest ended with the apes planning revolution, this begins with the revolution over and peace with the humans established, not to mention an entire nuclear war having occurred in the interim. All of these elements have been thrown together in a disjointed clutter, one that is resolved in only a rudimentary way in the end.

The script, by John William and Joyce Hooper Corrington who were also responsible for The Omega Man (1971), is full of ponderous dialogue that seems to be straining for pithy profundity. Part of the problem here is that 20th Century Fox had thrown out Paul Dehn’s original idea for the film, which was much darker and more violent, and decided that they wanted a film that could be pitched to family audiences. The film ends on a note of upbeat inter-species harmony that seems at contradiction to the future that we know to be ahead as seen in the first two films.

Battle for the Planet of the Apes was directed by J. Lee Thompson, who also directed Conquest of the Planet of the Apes. In the 1960s, J. Lee Thompson directed above average A-budget action films such as The Guns of Navarone (1961) and McKenna’s Gold (1968), as well as the great revenge thriller Cape Fear (1962) but his career progressed downward toward a slew of terrible Charles Bronson vehicles in the 1980s and eventually the pitiful remake of King Solomon’s Mines (1985).

J. Lee Thompson’s marshalling of the action scenes and the climactic showdown between the apes, mutants and humans is all workmanlike, reflective of an overall sense of ennui that has infected the series by now. The entire production radiates a tired air – from the tawdry sets through to the once innovative makeups. At least Roddy McDowall (in his fourth appearance in a Planet of the Apes film), Lew Ayres and Severn Darden manage sufficiently lively performances.

J. Lee Thompson’s other films of genre interest are:– the classic revenge psycho-thriller Cape Fear (1962), the occult film Eye of the Devil (1967), the Communist China spy thriller The Chairman/The Most Dangerous Man in the World (1969), The Reincarnation of Peter Proud (1975), the Western The White Buffalo (1977) with Charles Bronson hunting a mythic buffalo, the slasher film Happy Birthday to Me (1981), 10 to Midnight (1983) with Charles Bronson vs a serial killer and the utterly dire adventure film King Solomon’s Mines (1985). J. Lee Thompson also co-wrote the scripts for the very strange psycho-thriller East of Piccadilly (1940).