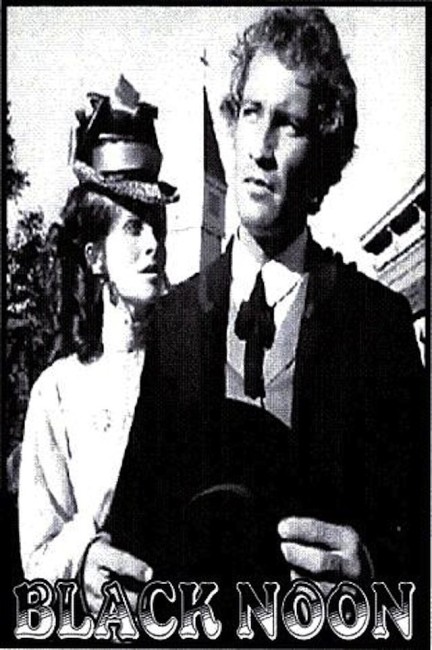 Reverend John Keyes, along with his wife Lorna, is on his way to take up a position at a new parish but their wagon has broken down in the desert. They lie dying but are saved by the people of the nearby town of San Melas. The townspeople give them a place to stay until Lorna can recover. The gunslinger Moon terrorises the townspeople and demands they pay a percentage of the gold from the town’s mine, even though the seam has dried up. John stands up to Moon. Afterwards, the townspeople urge them to stay, even offering to build a church and house for them but Lorna is determined to move on as soon as possible. They both experience troubling dreams and realise that sinister forces are at play trying to keep them in the town.

Black Noon was a tv movie. It was one of the few crossovers into the horror Western that we had had during the day. Before this, there was only the vampire Western Curse of the Undead (1959) and the cheapie duo of Billy the Kid Versus Dracula (1966) and Jesse James Meets Frankenstein’s Daughter (1966). Ahead there would be a horde of Western cross-genre matchings with vampire Westerns such as Sundown: The Vampire in Retreat (1990); avenging ghost/revenant Westerns like High Plains Drifter (1973), Shadow of Chikara (1977), Ghostriders (1987), Ghost Town (1988) and Jonah Hex (2010); two zombie Westerns with The Quick and the Undead (2006) and The Dead and the Damned (2010); cowboys vs troglodytes in The Burrowers (2008) and Bone Tomahawk (2015); and two entire horror Western anthologies with Grim Prairie Tales (1990) and Into the Badlands (1991). (For a more detailed overview of Western/genre hybrids see Weird Westerns).

I looked forward to Black Noon as it had had some reasonable write-ups in various places. Unfortunately, after seeing the eventual work I ended up disappointed. The film seemed to take forever to arrive at its horror elements. Right up until the end, all we get is Roy Thinnes having nightmares of being pursued by a man covered in blood and cutaways to Yvette Mimieux in her shed poking pins into voodoo dolls. It is not very clear where all of it is going. We eventually get the impression that we are in a standard Sinister Town Where No-One Can Leave scenario but the film seems very laidback about building this into anything sinister. The pace is sedate – it looks and feels like a typical tv movie of the era.

The film arrives at an abrupt ending that leaves more questions than it does answers. I am not sure I fully followed the explanation of what is going on – something to do with the townspeople being immortal and/or descendents of the witches of Salem. It is said they have drawn Roy Thinnes there variously because the town needs a preacher but also, in an ending akin to The Wicker Man (1973), because they need a human sacrifice. We are also left not entirely sure who Henry Silva’s villainous gunslinger in black is meant to be. It is suggested that he is the personification of Death with whom the townspeople have made a pact for immortality, although it is not clear why he is also pressuring them to pay up gold from the mine.

The film has an impressive cast line-up, including Roy Thinnes who became a star as a result of the cult tv series The Invaders (1967-8) and his wife Lyn Loring who also plays Thinnes’s wife here; Yvette Mimieux who became a name after appearing as Weena in The Time Machine (1960) and went on to several other genre roles; Gloria Grahame, an actress who had had some popularity in the 1940s, including appearing in It’s a Wonderful Life (1946) and being nominated for an Academy Award for Crossfire (1947); and Ray Milland who appeared in a number of horror films, including several for Roger Corman. The most fascinating name on the credits is Hank Worden who is cast as one of the townspeople and played mostly in Westerns where he was a regular in John Wayne’s stock company but is mostly remembered by genre purveyors as the geriatric waiter in tv’s Twin Peaks (1990-1).

Director Bernard L. Kowalski started out making various B movies with the likes of Night of the Blood Beast (1958) and Attack of the Giant Leeches (1959). Kowalski directed a great deal of television between the 1960s and 90s and is known for films such as Krakatoa: East of Java (1966) and one subsequent monster movie SSSSSSSS! (1973). Andrew J. Fenady was a tv producer, then known as creator of the show The Rebel (1959-61) and producer of Branded (1965-6). Fenady dabbled in several genre tv movies with The Woman Hunter (1972) and The Stranger (1973), and the theatrically-released films Arnold (1973) and Terror in the Wax Museum (1973).