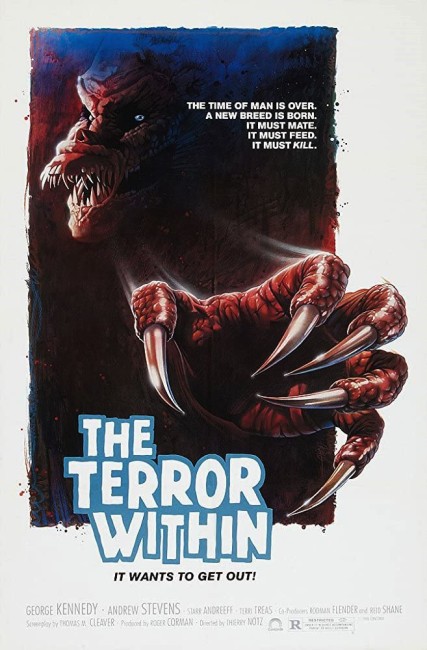 The world has been devastated by a plague. A group of survivors shelter in safety at a laboratory in the Mojave Desert. A sortie to the surface is killed by the mutant creatures nicknamed Gargoyles that lurk there. A rescue party is sent to find them and come across a survivor Karen. Brought back to the laboratory, it is discovered that she is pregnant. The pregnancy accelerates and in a matter of hours she gives birth to a Gargoyle, which kills her as it emerges. The creature gets free into the corridors of the laboratory complex and begins eliminating those in the shelter.

The Terror Within was a B-budget Alien copy produced by Roger Corman via his Concorde-New Horizons production company. It was a directorial debut for Thierry Notz who served as second unit director on Corman’s last directorial film Frankenstein Unbound (1990). Notz subsequently made Watchers II (1990) for Corman and a couple of war films Fortunes of War (1994) and Goodbye America (1997) but has since vanished.

The Terror Within comes fairly much by the playbook established by the abovementioned films. There’s an isolated complex with lots of darkened corridors, a vaguely sketched future scenario – the aftermath of some plague that appears to have devastated the world. And into the mix a mutant creature lurking in the dark and bumping off the cast.

The film has group of B-list actors – Andrew Stevens who was known for films like The Fury (1978), 10 to Midnight (1983) and as a regular on Dallas (1978-91) and a host of B movies from the 1990s onwards; George Kennedy, an A-list actor during the 1960s who had gravitated to B movies by the 1980s (he gets top-billing despite being killed off partway through); as well as Terri Treas and Starr Andreeff who were both hanging around New World in bit parts throughout the 1980s/90s.

The creature itself looks suitably rubbery and monstrous. And the film does provide a very gory chestburster sequence – although in this case it becomes a pregnancy-burster where Yvonne Saa gives birth in a scene drenched in splatter. On the other hand, Thierry Notz gives a routine handling of the formula. It is only in the scenes towards the end with Andrew Stevens and Terri Treas fighting off the creature that the film builds any degree of even moderate tension.

This was followed by a sequel The Terror Within II (1991) where Andrew Stevens returned and made his directorial debut. Shortly after this, Stevens teamed up with Corman as a producer and sometimes director of low-budget action films.