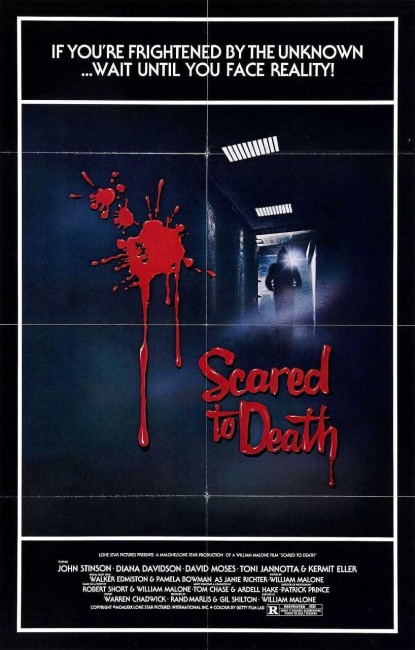 Los Angeles is struck by a series of murders that has left police baffled. Ted Lonergan, a former police detective now working as a private eye, meets Jennifer Stanton after bumping into her car. He asks her out where they become involved and she starts to act as an assistant. Ted is pressed by his former detective colleague Lou Capell to aid the investigation into the murders. Jennifer follows a lead from Sherry Carpenter, a genetic research assistant at Amberdine Research labs, but is found in a coma after going to meet her. Ted discovers from Sherry that they are dealing with the Syngenor (an acronym for Synthesised Genetic Organism), a lifeform that was created by her late boss. The Syngenor has escaped from the laboratory and is hiding in the sewers from where it is emerging to devour the human spinal fluids it needs to survive.

Scared to Death was the first film of William Malone. Malone was a former genre fan who started his career at Don Post Studios, a studio known for making life masks of the Famous Monsters. At Don Post, Malone purportedly designed the Michael Myers mask for Halloween (1978). Malone raised $74,000 to make Scared to Death and this became his directorial debut. He would subsequently go onto make the better budgeted alien nasty film Titan Find/Creature (1984) and these were sufficient to gain him a sporadic career directing genre tv over the next decade.

Subsequently, Malone had his greatest success as director of the remake of House on Haunted Hill (1999). He went onto direct two other horror films, FeardotCom (2002) and Parasomnia (2008), although both of these were poorly received. He also delivered script work on Universal Solider: The Return (1999) and Supernova (2000), which he was also originally set to direct but ended up being replaced. Malone co-devised the story for Scared to Death with Robert Short who has had a long career as a special effects artist and specialty prop builder on films such as Piranha (1978), 1941 (1979), Star Trek – The Motion Picture (1979), Splash! (1984) and Beetlejuice (1988), among many others.

Scared to Death was intended by William Malone as a copy of Alien (1979). It was one of the first of a great horde of Alien copies to make its way into theatres and video. Malone is fairly open about it having been a film designed as such for commercial purpose, as well as one that also drew on his experience as a makeup creator. You have to accept Scared to Death as being exactly that – the look of the creature is certainly blatantly imitative of H.R. Giger (as was the case of most of the low-budget Alien copies that followed).

As a novice director, Malone’s directorial style is crude and far removed from the masterful suspense generated by Ridley Scott. He draws the suspense scenes out in over-obvious ways and lets the film plod in between. Indeed, the opening scene with a camera peeping in on a girl undressing, hearing noises and the lights going out gives you the impression that you are watching a slasher film rather than a monster movie.

The plot does a serviceable job of bringing Alien away from space and down to contemporary Earth and providing a nominal genetic experiment amok justification. The main complaint might be that it takes over an hour of the running time before the script gets the hero/heroine and the monster together and even longer than that before they get an explanation of what the creature is.

A sequel was later made without William Malone’s involvement with Syngenor (1990). This Scared to Death is not in any way related to nor should be confused with the creaky old Bela Lugosi thriller Scared to Death (1947).