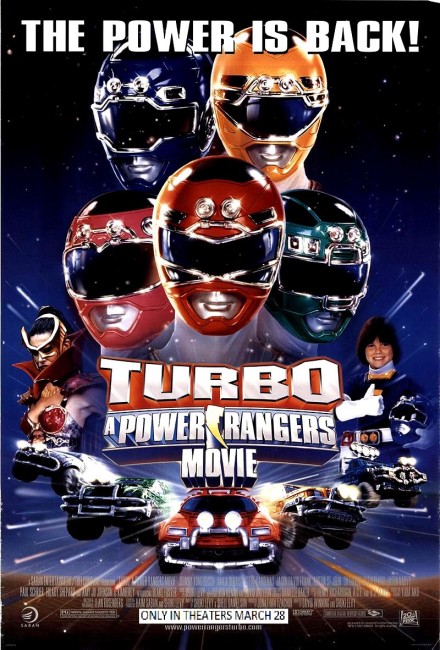 The power-crazed Divatox seeks to marry the fire monster Maligore so that they can create an intergalactic reign of terror together. In order to do so, she needs the key held by the wizard Lerigot that will free Maligore from where he is imprisoned on the island of Maranthius. Instead, Lerigot flees from Divatox’s incompetent lackeys and comes to Earth, landing in Africa. The Power Rangers go to rescue him but are forced to hand him over to Divatox when she takes the former Power Rangers Kimberly and Jason prisoner. Given the new Turbo Megazord vehicles by Zordon and taking the young Justin on board as a new Power Ranger, they set sail aboard the Ghost Galleon for Maranthius in a race to stop Divatox before she raises Maligore from the pit of fire.

The Mighty Morphin Power Rangers (1993-6) phenomenon was one of those children’s fads that suddenly appears, goes through the roof and then fades away by the following year. It was the particular fad of 1993-4 and soon joined a heap of other bygone phenomena – the Transformers, the Teenage Mutant Ninja Turtles, Pokemon, He-Man and the Masters of the Universe et al. The tv series itself was incredibly silly – teens (in actuality American teens doing the face and speaking parts, while all the action was edited in from a Japanese tv series) going through some incredibly silly martial arts moves, kicking in the heads of utterly unconvincing rubber monsters and with lots of shrieking overacting on the parts of the villains. The phenomenon produced one live-action film Power Rangers: The Movie (1995) to which this was a sequel. Two decades later, Power Rangers (2017) was a further theatrical reboot.

Both the tv series and the film were incredibly silly. This pretty much keeps things at the same level. The female villain of the piece is played with much ludicrously over-the-top shrieking and there is a good deal of buffoonish clowning from her incompetent lackeys. The creature costumes are, at best, colourfully silly and clearly not meant to be taken seriously. The Lerigot creature, with its big, owlishly blinking eyes is none too convincing. The creatures that turn up in the middle of the ship journey are ludicrous – looking like a cross between Gamera and a gorilla suit with absurd turtle-heads sticking out of their chests. The last of these is disposed of by one of the Power Rangers going “Boo” to it, which really says all there is about how seriously the film is taking itself.

While the first film injected a modest budget into the proceedings and at least looked like the tv series had been expanded out onto the big screen, Turbo: A Power Rangers Movie feels like nobody could be concerned with making anything more than the most minimal effort. The story has been conducted as an entry-level fantasy quest. It involves some exotic sounding names – a journey on the Ghost Galleon, passing through the Nemesis Triangle, the arrival at the Island of Maranthius – but in actuality these are utterly mundane (the Ghost Galleon is a standard sailing ship set, the journey through Nemesis Triangle merely requires the ship to pass through a CGI wave).

Moreover, the film cheats on the appeal the tv series had to its adolescent audience. For the greater part of the film, the superheroics and martial arts cop suey have been dumped – the Power Rangers rarely even appear in their costumes throughout. Instead, the film is more of a standard fantasy quest.

The gimmick this time is that each of the Power Rangers is given a souped-up vehicle, something that now turns the exercise into a bizarre custom car fantasy. There is a big martial arts punch-up at the climax where the custom cars turn into a combined transformer robot for a cheap CGI fight with the volcano monster.