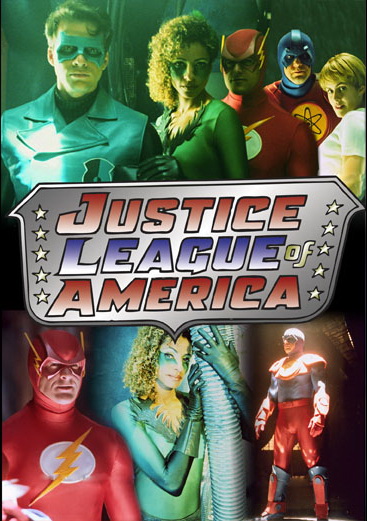 The Justice League of America are a group of people with superpowers that operate together as a team in New Metro City. The group includes:- Guy Gardner who becomes Green Lantern with a ring that allows him to manifest the objects he imagines; nerdish science teacher Ray Palmer who can shrink himself as The Atom; struggling actress B.B. DaCosta who becomes Fire with the ability to project flame; the permanently unemployed Barry Allen who can move at super-speeds as The Flash; and the team leader, the alien J’onn J’onnz. The group operate from a submarine base beneath the harbour. In their secret identities, they live together in the same apartment where their attempts to balance their private lives with being superheroes causes frequent problems. At the Eno Meteorological Institute, bright and rising scientist Tori Olafsdotter finds a mysterious briefcase containing a device and opens it. As she does so, water spills and shorts the device out. Afterwards she finds that she has the ability to freeze things. At the same time, a masked villain known as The Weather Man is using a weather manipulation device and the Justice League are constantly having to go into action to stop the disasters he creates. As he demands a $20 million ransom from the city, Tori makes the accidental discovery that The Weather Man is her boss Dr Wellesley Eno – but this places her life in danger.

Justice League of America is one of the fascinating never-ran artifacts in the annals of television. There are a handful of similar projects – the tv pilots for Dr. Strange (1978), Captain America (1979), The Spirit (1987), Nick Fury, Agent of Shield (1998), and you could also throw in the never-released film version of The Fantastic Four (1994). None of these went anywhere beyond the production of a single pilot film. However, with the characters later being resurrected in different forms and gaining a popularity in the big-screen film productions of the 2000s, these tv pilots have turned up as fascinating novelty artifacts, usually available on YouTube or bit torrent sites, where their low production values and frequent miscontrual of canon has become a frequent source of ridicule to fans.

The Justice League of America pilot was made not long after the hit of tv’s Lois and Clark: The New Adventures of Superman (1993-7), which enjoyed success by construing the basics of the Superman comic-book into an awkward relationship comedy that had Superman vying between being a superhero on one hand up against the difficulties of maintaining a secret identity as Clark Kent and his attraction to Lois Lane on the other. In fact, Justice League of America gives the appearance of network executives having gone away and ordered scriptwriters to create something in a similar vein to Lois and Clark.

As a result, while the comic-book Justice League of America was about all the superheroes that were under DC’s roof being brought together to defeat giant-sized menaces, the Justice League of America pilot seems to be about a group of twentysomethings with superpowers who must come together to tackle superheroic menaces while balancing this with the comically awkward problems in their private lives – The Flash may be the fastest man in the world but is unable to hold down a job; Fire is a struggling actress; Guy Gardner is a womaniser who is trying to propose and then reconcile with his girlfriend but is constantly being interrupted by having to go and save the world, although is unable to tell her the truth; Ray Palmer is a cliched bespectacled nerd who pines after female scientist Tori Olafsdotter. All of the superheroes’ identities have been rewritten as characters in their twenties who live in the same apartment. What we have now is in fact not the Justice League, it is Lois and Clark reconceived as a variant on Friends (1994-2004).

Almost all of the characters and their origins are changed. One must also note that many of the big-name members of the comic-book Justice League – such as Superman, Batman and Wonder Woman – are absent and the show is focused on lesser-known heroes. Indeed, out of the characters present, only The Flash had appeared in any media form before with the tv series The Flash (1990-1), although both The Atom and Green Lantern had appeared in occasional episodes of The Superman/Aquaman Hour of Adventure (1967) and Super Friends (1973-86).

For some reason, the Green Lantern we have here is Guy Gardner rather than test pilot Hal Jordan, whereas according to the comic-books Guy Gardner was Abin Sur’s back-up choice as the wearer of the ring who has become increasingly unstable in comic-book developments. There is also no explanation of the ring’s origin or powers with Green Lantern now being someone who, for all apparent purposes, simply has a magic ring.

On the printed page, Fire was originally Beatrix Bonilla Da Costa, the president of the Brazilian division of Wayne Enterprises and in other versions a model/Brazilian secret agent, but here becomes an African-American character who is relegated to being a would-be actress stalked by an over-enthusiastic David Krumholtz. In the comic-books, Ray Palmer/The Atom is a scientist who develops a lens that allows him to shrink his size, whereas here it is due to an all-purpose radioactive space rock he finds in the desert. In the comic-books, Ice is a princess of a lost Norse kingdom of ice people; here she is a regular American girl who works as a meteorologist and gains her powers after a lab accident, although for some reason also maintains the character’s original Norse name. The Justice League’s headquarters The Watchtower has also gone from a space station in orbit (a base on The Moon in other incarnations) to a submarine at the bottom of the local harbour that is reached via an elevator hidden in the pillars of a bridge.

Maybe the most ridiculous part is just how badly the characters’ costumes have been depicted on the screen. Green Lantern’s black-and-green one piece bodysuit and mask is turned into a set of tights, a thick aquamarine vest jacket and a pair of large green oddly-shaped goggles. The Flash comes in his familiar red spandex with Mercury-like wings on his mask and is perhaps the most faithful to the original source – although the then-recent The Flash tv series conducted a much snappier incarnation of the costume.

The Atom is a guy with a dumpy build who is outfitted in an awkwardly over-padded red and blue outfit that makes him look like a cartoon character. Fire looks quite sexy in her green outfit but the silliest part is where the only difference between her in costume and day guise is a single streak of green makeup underlining her eyes and the piling of her hair up to one side – despite which stalker David Krumholtz only manages to recognise her because he sees Fire wearing the earrings he gave her.

The worst of these is J’onn J’onnz who comes out as reasonably closely resembling his comic-book original in look (although here for some reason is minus his Martian Manhunter sobriquet, his Detective John Jones human identity and any explanation about coming from Mars). The worst part is how the role is cast with an overweight David Odgen Stiers who gives us a J’onn J’onnz with a stomach bulge beneath his costume and a pudgy jowly face.

The results are not that far different from another disastrous misconstrual of a superheroic property that came out the same year – Joel Schumacher’s Batman & Robin (1997) abomination. The characters come out with lines that make you wince: “You gotta fix the tv set – we’ll miss Touched by an Angel [1994-2003]” says Matthew Settle as a shrunken John Kassir is seen disappearing into the innards of the box. There is a groan-inducing scene where John Kassir’s Atom shrinks down to get under a laser security grid and starts to do an impromptu limbo dance as he slides underneath the beam, which simply shows that the people making the film weren’t taking things seriously.

Instead of any Earth-threatening menaces, the Justice League seem to be operating in a single city, while the resident menace of the pilot is Miguel Ferrer as a non-costumed villain who would appear to be loosely based on the regular Flash nemesis The Weather Wizard. There is a frustrating low-level of imagination gone into their superheroics where the Justice League are involved in actions such as rescuing a cat trapped under a house, a wall falling on workmen, putting out a fire, or combining forces to break into a facility during a cocktail party.