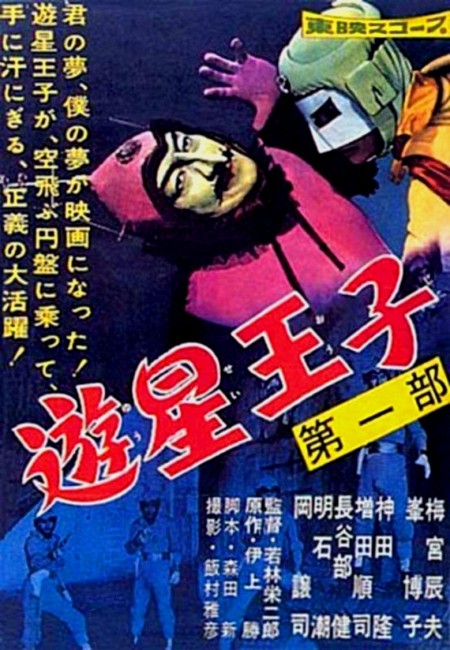 The tyrannical Phantom from the planet Krankor appears on all television broadcast bands and demands that humanity surrenders to him. However, Earth has a defender in the masked Prince of Space who appears out of nowhere in a spaceship and is unable to be damaged by The Phantom’s weaponry. The Phantom makes all effort to steal Professor Macken’s new ultra-powerful rocket fuel formula. When this plan is thwarted by Prince of Space, The Phantom responds by abducting Professor Macken and several other scientists so that they can testify to Earth how powerful his weaponry is.

Japanese fantastic cinema of the 1950s and 60s will always be dominated by the kaiju eiga – the giant monster movie. Less well known emerging around this same time was the Japanese space opera/alien invader film, which began with Ishiro Honda’s The Mysterians (1957). This developed over the next few years and included colourful adventures like Battle in Outer Space (1961), Invasion of the Neptune Men (1961), Atragon (1963), The Last War (1966) and Latitude Zero (1969). These two mini-genres – the giant monster movie and alien invader/space opera film – inevitably combined in the mid-1960s in efforts like Ghidrah the Three-Headed Monster (1964), Monster Zero/Invasion of the Astro Monster (1965), Destroy All Monsters (1968), Destroy All Planets (1969), Attack of the Monsters (1969) and Voyage Into Space (1970).

Prince of Space is one of these Japanese alien invader films. It tries to tap into the spirit of early serial adventures like Flash Gordon (1936) and Buck Rogers (1939) – moustachioed villains in black, intently serious heroes in spiffy costumes, plot devices designed to create much running back and forward between various Earth/galactic locations. Like most of the serials, Prince of Space also suffers from a primitiveness in its effects and settings. Unlike the Flash Gordon and Buck Rogers serials, it lacks the vivid pulp imagination that transcended the primitiveness of budgetary limitations. Instead, Prince of Space lands squarely into the midst of bad movie stakes – it seems to almost have been tailor-made for something like tv’s Mystery Science Theatre 3000 (1988-99) (and indeed was later recycled and ridiculed on the show).

The special effects are painfully primitive. The villain’s rocketship comes with wires clearly visible and has a rotating drill bit nose cone that makes it look like an absurdly cartoonish spinning carnival carousel. The villain later also flies a dragon spaceship, which looks exactly like the representation of a plastic chicken that might adorn the exterior of a fried chicken outlet. There is an extremely silly scene where Prince of Space’s ship enters an asteroid storm and ends up being pelted by what look like pieces of popcorn that are supposedly representing asteroids.

In its own laughably primitive way, Prince of Space tries to conduct an early equivalent of a Star Wars (1977)-styled space battle between ships armed with rayguns – which makes it possibly the first film to do so. We eventually do get a giant monster near the end but this is only a very large man in a boiler suit with a big studded belt and pointy ears – which makes him look like the Rock Biter out of The Neverending Story (1984) – who gets to breathe some fire while batting at the ludicrously unconvincing model on a wire that is supposed to represent Prince of Space’s saucer ship.

Everything is played with a farcically po-faced seriousness. Phantom of Krankor comes with an absurdly beaked false nose, as does all his minions, and a giant mustache. The hero looks resplendent in a snazzy white jumpsuit, cape and visored mask, shades of the later Japanese televised superhero Ultraman (1966-7). There are pieces of pricelessly bad dialogue – the two boys contemplate the villain’s motives: “Why’s he come out at night?” “He’s evil and evil people always come out at night.”

Not to mention completely unbelievable pieces of plotting – like the revelation that Prince of Space has a secret identity as … Wally the street corner shoeshine boy.There is no explanation involved as to how a mere shoeshine boy could have devices like a spaceship, rayguns and invulnerability to alien weaponry that are vastly more scientifically advanced than anything on the contemporary Earth that we see around him.

The action scenes tend to the slow paced and are unexciting, not to mention are shot in an impoverished way that kills off any imagination. The score is represented by ethereal electronics of the sort that became appropriated by science-fiction after the success of Forbidden Planet (1956).

All the parts have been dubbed by American voices. One of the better parts about the film is the dubbing of the actor voicing Phantom of Krankor, where the unnamed voice actor chosen is someone who does the booming stentorious mad laughing villainy thing to perfection.