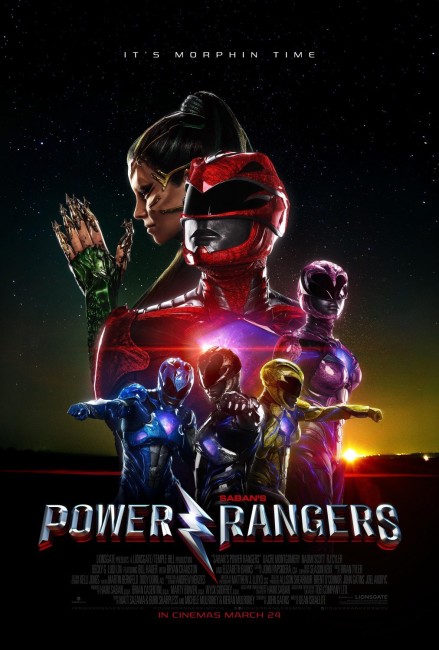 Jason Scott, a star high-school football player in Angel Grove, is thrown in detention after an incident in which he wrecks his car. There he stands up to stop autistic Billy Cranston from being bullied. In return, Billy hacks the ankle bracelet Jason is forced to wear and takes him out to a quarry where he blows up a rock face, Jason, Billy and three other teens from the school that are in the area uncover a set of coloured glowing stones. The next day, they find that the stones confer superpowers. The five discover the buried location of a spaceship at the bottom of a river where they meet the robot Alpha 5 and Zordon, the leader who has been embedded in the ship’s matrix. Zordon tells them they have been selected as Power Rangers and need to protect the Earth against Rita Repulsa who has come to find the all-powerful Zeo Crystal, buried somewhere in Angel Grove. As Rita appears and sets about gathering gold to create her Goldar monster, the teens try to master their newfound powers and find their destinies as the Power Rangers.

The tv series Mighty Morphin Power Rangers (1993-6) was one of the indisputable pop culture phenomena of the 1990s. Featuring teenage heroes pitted in wall-to-wall martial arts combat against absurdly unconvincing rubber monsters and madly over-acting villains, it succeeded in becoming a phenomenon. In actuality, what people were watching was a long-running Japanese tv series Super Sentai (1975– ), which had been brought up by children’s entertainment producers Saban Entertainment and re-edited for Western audiences, keeping the martial arts and effects sequences and simply adding several minutes of live-action inserts with American actors for the non-fight scenes each episode. The success spawned two movies – Power Rangers: The Movie (1995) and Turbo: A Power Rangers Movie (1997). Subsequent to that, Saban and later other companies conducted the same process to make more than twenty other Power Rangers tv series, all re-edited from various seasons of Super Sentai.

With this film, the Power Rangers become the latest pop culture artifact to be resurrected on the big screen. With Hollywood having blown through almost every tv series of the 1970s and 80s, every comic-book they can lay their hands on and even toylines such as Transformers, G.I. Joe and Max Steel, it seemed inevitable at some point that the Power Rangers would get the big-screen resurrection treatment. The question is whether they should have been.

I suspect that enjoyment of Mighty Morphin Power Rangers is one of those things, like watching Barbie, My Little Pony and Teletubbies, that is best appreciated with a mind that is in the single digit age group. Given that the film here is resurrecting a franchise that is over twenty years old, who could the audience for the new incarnation possibly be? Is it people who are now in their thirties come to revisit an embarrassment from their childhood? Is it that the producers are confident that they have a brand name that has grown so big through the various spinoff series that new crowds of the single digit age group are going to flock to theatres in droves? Whatever the case, Power Rangers did a not immodest $85 million at the US box-office.

The problem the filmmakers face is the question of what tone a modern big-screen incarnation of the original Power Rangers should take. The original was so absurdly over-the-top in its camp excess that it made tv’s Batman (1966-8) look like a model of Shakespearean drama in comparison. Is there truly any filmmaker demented enough to have sought to replicate that today? None too surprisingly, director Dean Israelite, who had previously made the quite good time travel film Project Almanac (2015), decides not to do so.

Rather what Israelite chooses to do is give us a dark and gritty Power Rangers. We’re not talking anything that comes at Batman or Punisher-level grimness but it is Power Rangers wrenched out of its gaudy campiness and brought down to earth, while the lighting level favours dim or night-time settings for most of the film. With the exception of Elizabeth Banks who goes some way towards recapturing the rafter-rattling excess of Barbara Goodson’s Rita Repulsa, everything is toned down to the levels of acting that would generally pass muster in a standard drama.

The question that leaves you with is why anybody would think that a Mighty Morphin Power Rangers stripped of all its distinctive tone would appeal to fans of the original. It is like trying to imagine the idea of a dark and gritty remake of Austin Powers or the Police Academy films – it is so removed from the original all you are left thinking is why.

This is part of the confused identity crisis that Power Rangers suffers as a film. Having ditched the tone of the original, it cannot decide what it wants to be. Bizarrely enough, the early scenes in detention seem to be trying to give us the Power Rangers by way of The Breakfast Club (1985) by rebranding them as a group of misfits. Although rather than John Hughes’ classic of teenage alienation, what we then get are a bunch of characters that each seem designed to tick off one particular demographic niche – there’s the African-American kid, the Asian kid, the jock, the autistic kid (the film’s most developed character), even the bi girl (although this is written in a way that is designed to fudge the issue as much as possible – while the character is being celebrated by the LGBT community, one should note that the dialogue that indicates such is only Ludi Lin asking her “Boyfriend troubles? Girlfriend troubles?” and she not giving an answer to either).

Dacre Montgomery is lumbered with a character who improbably goes the entire way through the film engaged in superheroics and saving the town while shackled to a home detention ankle bracelet. The only characterisation that Naomi Scott is written with seems to be trying to make a message about cyberbullying, although the way it is done actually negates the message – it is not as though she has taunted or sent hate messages as the bulk of cyberbullying consists of, rather than she merely shared a pic that proved embarrassing to someone. Such is swept under the carpet in a line of dialogue from Dacre Montgomery: “You did an awful thing but you’re not an awful person,” which seems about as extreme a dismissal of a serious issue as you can get.

Beyond this, the film plays out as a superhero origin story. This is fine, except that it has the same problem that all superhero origin films do – much of the film, up until the 90-minute point in fact, does not feature the Power Rangers in their trademark costumes. Rather during this time, we constantly have the characters struggling to get their powers to work or being told they are failures. Certainly in the climactic scenes, we get the Rangers tackling Rita and the Goldar monster in their Transformer-like Zords amid much in the way of mass destruction. It is here with the scenes of robotic dinosaurs and the like running through the streets of the town that the film finally finds the silliness that was distinctive about the original Power Rangers. On the other hand, these scenes sit jarringly with the gritty serious tone that the film has attempted to establish elsewhere. Not to mention that much of the edge has been taken off such scenes by the far better-budgeted Transformers films.