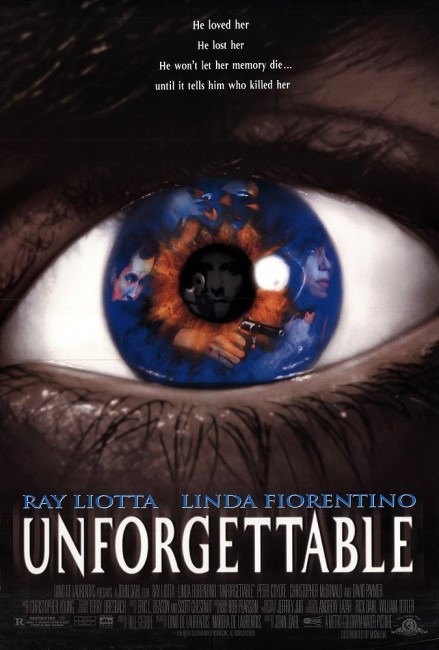 Neuropsychologist Dr Martha Briggs gives a lecture where she talks about the possibility of transferred memories. Afterwards she is approached by police pathologist David Krane who is interested in her work. She shows Krane an experiment where she is able to successfully transfer spinal extracts between lab rats, allowing a rat that has never run a maze to do so after receiving an injection from a rat that has. Martha learns how Krane was charged with murdering his wife but ended up getting off because the police botched the investigation. He wants to become the first human subject in her experiments but she refuses because of the potential dangers. He breaks into the lab and takes samples of the serum. He then injects himself with spinal fluids from his late wife and is able to relive the last few moments of her life before she was murdered. Martha joins forces with Krane as he uses the serum to try to track down the real killer.

Certainly, Unforgettable is well put together – well directed, well edited and well photographed. However, the theme of the serum that allows people to relive other’s memories is a well-worn one – one that, like the precognition thriller, has been overused in efforts like Hauser’s Memory (1970), The Six Million Dollar Man tv movie Solid Gold Kidnapping (1973), BrainWaves (1983) and the psychometry thriller Sensation (1994), and has been relegated to the stuff of tv movies.

One kept hoping that Unforgettable would do something new and original with the idea. John Dahl certainly gives the film enough slick polish to carry it, but in the end, Unforgettable only distinguishes itself by the very ordinariness of its treatment of the theme. Scriptwriter Bill Geddie never chooses to explore the ideas presented by the discovery. Instead, the drug is only there as a fulcrum upon which to swing the rest of the story and never serves anything more than thriller ends. For example, when Ray Liotta takes the drug, the flashbacks that he experiences of other people’s lives never vary beyond those that conveniently convey the information needed to carry the plot. When one considers the vast wealth of memory experience within a human lifespan that he has to choose from, the convenience of this is implausible.

Unforgettable was quickly forgotten in cinematic release and not successful. John Dahl recovered with his next vehicle, the Matt Damon-Edward Norton poker-player film Rounders (1998) and then the fine road movie psycho-thriller Joy Ride/Road Kill (2001). Since the mid-2000s, most of his work has been in television.