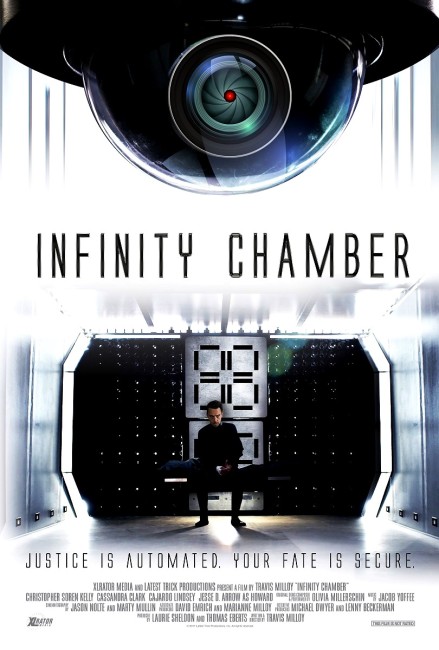 Frank Lerner wakes up inside a prison cell. The prison system is automated and provides all his basic needs. He realises that Howard, the system voice that talks to him, is an artificial intelligence. He tries to reason with it and work around Howard’s programming to get it to release him. At the same time, the system repeatedly takes Frank back through his memories of the same day in search of information. In his memory, Frank wakes for the day and goes downtown to a coffee shop where he talks to the barista Gabby. Through each meeting, Frank connects more with Gabby and tries to find a significant clue that will allow him to escape.

Infinity Chamber was the second directorial film from Travis Milloy. Milloy had previously made the crime film Street Gun (1996). His most high-profile credit up to that point had been the screenplay for Pandorum (2009).

Milloy states that he came up with the idea for the film after reading an article about the idea of automated prisons, which led to the natural question of what happens when something goes wrong. The same idea also formed the basis of the action film Armed Response (2017) around the same time. The film was shot on a limited budget using a contained number of sets and only a handful of actors.

The premise of the man being held prisoner with an A.I. as captor is very similar to the subsequent Tau (2018) in which Maika Monroe was held prisoner by a mad tech billionaire and had to bargain with the A.I. he had created in order to obtain her freedom. Here the A.I. is not as sophisticated ie. it has less of a personality and an eagerness to engage and its frequent response is more that of a real world computer – that it simply that is has no information about a question.

The end of the film also has something in common with the subsequent Flashburn (2017), which concerned a man imprisoned with a computer voice for company, later revelations that he is a virologist and the probing of his memory to find the whereabouts of the antidote. That said, I don’t feel Travis Milloy pulls the film together with a big enough finale – the revelation of the nature of the prison is underwhelming, although the discovery of the hiding place of the chip is a clever touch.

What does work quite nicely is the series of nested reality flips that Travis Milloy keeps pulling on us where the memory probes are continually taking Christopher Soren Kelly back to the same cafe on the same day as he meets/strikes up an attraction with barista Cassandra Clark, or where Christopher makes an escape before this is revealed to be an illusion created by the system. Even the end where he does make an escaped and returns to the real-life cafe where things start to be replayed comes with an uneasy uncertainty where we cannot be sure if that is part of yet another illusion.