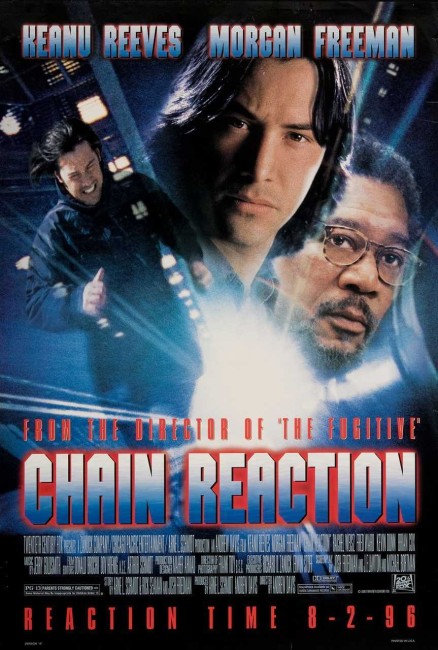 A physics team at the University of Chicago succeed in discovering a process that splits the hydrogen and oxygen molecules in water, something that will allow the cheap and efficient production of energy. However, when the team leader announces they are going to distribute the process freely to the world, a saboteur allows the project to overload in a massive detonation. The project’s machinist Eddie Kisilavich and one of the scientists Dr Lily Sinclair are forced to go on the run, where they are blamed for the sabotage and hunted by FBI, police and the conspirators alike.

Prior to Chain Reaction director Andrew Davis made the runaway success of The Fugitive (1993). Andrew Davis had earlier made action films like Code of Silence (1985) with Chuck Norris, Above the Law (1988) and Under Siege (1992) with Steven Seagal and the later likes of Collateral Damage (2002) with Arnold Schwarzenegger and the Kevin Costner lifeguard film The Guardian (2006). Davis’s one other genre film was the backwoods slasher The Final Terror (1983).

In Chain Reaction, Andrew Davis clearly appears to be trying to emulate the success of The Fugitive. The not terribly large difference between Chain Reaction and The Fugitive is that the central focus here is on a couple, as opposed to an individual, on the run from the forces of law for a crime they did not commit, while seeking the answer within a large conspiracy.

Unlike The Fugitive, Chain Reaction is not as concentrated and never emerges from the shadow of a number of debilitating problems. One of the things everyone remembered about The Fugitive was its spectacular set-pieces – the train crash, the jump from the dam. Andrew Davis constructs similar spectacular set-pieces in Chain Reaction – Keanu Reeves’s flight from the authorities across a split bridge, the pursuit across a frozen lake, the climactic attempts to flee from the explosion in the bunker – but unlike The Fugitive, the set-pieces here feel like just that, sequences that are not contained within a narrative.

To be fair, these never get too much in the way of the film’s basic thriller plot, which is conducted reasonably well, even if the science-fiction device is only a gimmick to hang everything on. The script does swing some implausibilities – Keanu Reeves is supposedly only a machinist on the project but for heroism’s sake the film implausibly has him, rather than any of the scientists on the project, come up with and be the one that holds the secret to the crucial discovery that makes the device work. With the most minor of rewriting he could have been made into one of the scientists. Nor is it ever clear why Keanu and Rachel Weisz were framed in the first place.

Keanu Reeves gives an okay performance – although this is something, one suspects, that is more due to Andrew Davis keeping him busy than he, nevertheless he does come across with some charm and does go some small way to suggesting an unorthodox genius. Rachel Weisz gives a far worse performance.

The best work comes from the second-billed Morgan Freeman. Freeman, as always, gives a performance of cool, aloof moral certainty. It is he that one watches in the film rather than Keanu Reeves or anyone else. In fact, Morgan Freeman gives such an absorbing performance that he offsets the film. Chain Reaction‘s big surprise is meant to be the revelation halfway through that Freeman is the conspirator that FBI agent Fred Ward is accusing him of being. However, the surprise throws the film off balance. Morgan Freeman is far too absorbing an actor to suddenly become unsympathetic and the film has made the pursuing FBI into far too one-dimensional villains to make them sympathetic. It is a rare case of an actor being too good for the one-dimensional role that the script wants to thrust them into.

(Winner for Best Supporting Actor (Morgan Freeman) at this site’s Best of 1996 Awards).