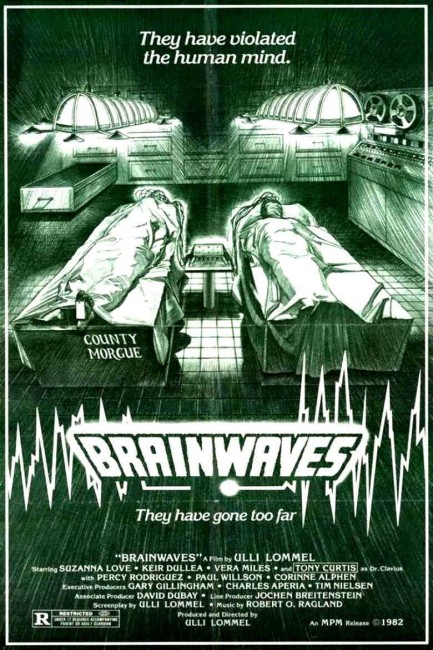 After being hit by a car, housewife Kaylie Bedford is rushed to hospital with critical brain damage. Her husband agrees to allow neurosurgeon Dr Clavius to enact an experimental procedure where the damaged parts of her brain are electronically corrected. As Kaylie slowly recovers, she is haunted by horrifying memory flashes. She discovers that the impulses Clavius used to heal her have been taken from the brain of a murdered woman. Determined to solve the killing, she and her husband start their own investigation. However, this serves to alert the killer.

Ulli Lommel (1944-2017) was a former associate to Rainer Werner Fassbinder who went onto become a director. Lommel has had a chequered career that has gone from arthouse horror – The Tenderness of the Wolves (1973) – to Andy Warhol exploitation movies like Cocaine Cowboys (1979). During the early 1980s, Ulli Lommel relocated to the US where he made a career as a low budget horror director. BrainWaves, which came during that period, is a better than average film, even if there is nothing about it that truly stands out.

The central concept behind BrainWaves is a science-fictional reworking of inherited memory clairvoyance films like Eyes of Laura Mars (1978) and Sensation (1994), although the idea of transplanted memories was first used in the tv movie Hauser’s Memory (1970). The script never deals with any of the science-fictional concepts associated with its technological extrapolation, instead it merely turns the idea towards thriller ends. Ulli Lommel plays everything with a conviction that is sufficient to ride over the fuzziness of the details (not) given about the brain operation. (Although there is the wonderfully absurd moment where Suzanne Love undergoes a brain operation that fails to even disturb her hairstyle).

The length of the film is surprisingly brief (77 minutes) – it is abruptly over just when the reasonably absorbing thriller aspect starts to kick in. Suzanne Love (Mrs Lommel) manages to give the film a great deal of warmth and vulnerability in the scenes showing her hesitant struggle to regain her faculties.