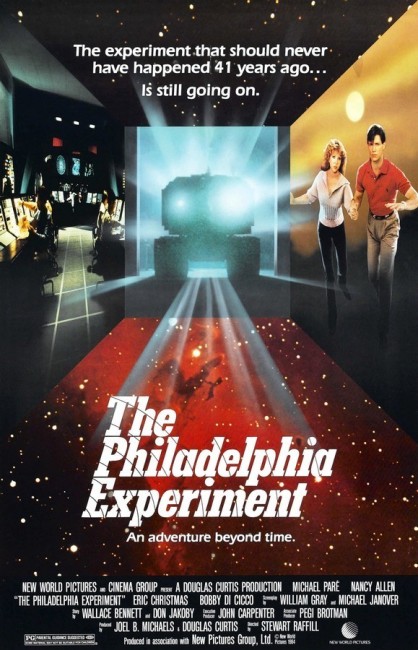 In 1943, the US Navy attempts an experiment to make an entire ship, the USS Eldridge, invisible. However, the experiment goes out of control and the ship is contaminated with a massive dose of radiation. Two sailors, David Herdeg and Jim Parker, jump overboard as the crew start being affected. They fall through a warp in space to emerge in what to them is a bewildering 1984. On the run from the authorities, they find the experiment has opened a hole in time that is dragging everything into it and causing vast climatic disarray.

This is an interesting little B-film. It loosely takes itself from The Philadelphia Experiment (1979), a ‘non-fiction’ book co-written by Charles Berlitz. (Charles Berlitz has also produced a number of works on various fringe science subjects such as The Bermuda Triangle, Atlantis and Roswell). The book purported to uncover files from an incident in 1943 where the US Navy attempted an experiment using Einstein’s (to this day still uncompleted) Unified Field Theory to make the USS Eldridge invisible. This somehow went wrong, transporting the Eldridge from Philadelphia to a harbour in Norfolk, Virginia, two days sail away, and back again, something that also caused crewmen to burst into flames, become invisible and to rematerialise inside bulkheads. Stories of the incident first appeared in the 1950s from Naval officer Carlos Miguel Allende who wrote a series of letters to UFO researcher Morris K. Jessup who published details of the experiment in his book The Case for the UFO (1955). The authenticity of the incident is dubious. Allende later changed details of his story and many facts that he claimed about himself were revealed to be false, while his real identity was later discovered as a man with a history of mental illness. Moreover, the crew of the USS Eldridge deny that anything out of the ordinary happened and ship’s logs show that Eldridge never ever docked in Philadelphia.

The US Navy, somewhat embarrassed by the publicity surrounding the incident, attempted to demonstrate to the public that what had happened was no more than the routine degaussing of the ship, which involves surrounding it with electrical cables that negate its magnetic field and would make it invisible to radar (but not the human eye) and that this had somehow been misinterpreted. The fringe science cultists put this down to cover-up and it has not stopped an amazing body of lunatic mythology emerging surrounding the incident, including claims that UFOs, aliens and the Men in Black were also involved, that the crew travelled through time and to Mars. There have been people on the lecture circuit claiming to be witnesses and physicists who were involved with the experiment, even one brave soul who claims to be the reincarnated soul of a dead crewman.

In 1980-81, not long after the book’s publication, this film version was announced. (Discussion of The Philadelphia Experiment had previously appeared on film prior to this and been discussed at length in The Bermuda Triangle (1979), which was also based on one of Charles Berlitz’s pseudo-science books). John Carpenter, then riding high on the success of his horror film Halloween (1978), was brought on board by a producer who was hoping to get him to direct (although Carpenter only ended up accepting an executive producer credit on the finished film). Carpenter could never work out the script to his satisfaction. The script circled around under various guises for several years with people never finding an adequate means of telling it is as a story.

I was contacted by Michael Janover who set the record straight about the evolution of the script. Various scripts were written, most of these circling around the experiment and the cover-up. Janover came up with the idea of adding the time travel element – this made the film no longer about the cover-up of an incident 40 years earlier but actively introduced the hero in the present. (To Janover’s amusement, the time travel idea that he came up with has now become part of the pseudo-science mythology surrounding The Philadelphia Experiment). The original version of the film had been planned as an A-budget effects vehicle but budget cuts curtailed the scale of some of the original vision in the script.

The film never concerns itself much with the book’s experiment in invisibility or the purported teleportation. The experiment is only a springboard for a more traditional time-travel story. This falls into familiar patterns. That said, The Philadelphia Experiment is not an uninteresting film, with good usage being made of the cultural shock value – like Michael Paré being shocked by a screening of Humanoids from the Deep (1980) on tv, bursting into laughter at finding that Ronald Reagan is now President, or his bewilderment at encountering a transvestite hooker.

Unfortunately, Michael Paré and Nancy Allen are too bland to give the story much emotional resonance – the happy ending is a particularly contrived irritation. However, director Stewart Raffill, after inflicting The Ice Pirates (1984) on audiences four months earlier the same year, does a surprisingly good job. The sense of visual alienation created among miles of empty white sand, bifurcated by a highway stretching to the horizon, or the journey through the flaming conflagration of the project landscape and the ever-present hole in the sky adds an atmosphere to the film that at times verges upon the surreal landscapes of sf writer J.G. Ballard.

There was a sequel Philadelphia Experiment II (1993), which interestingly turned the story into a battle to stop a Nazi-ruled alternate timeline from coming into being. The Philadelphia Experiment (2012) was a Syfy Channel remake, which also featured Michael Paré but this time playing a supporting heavy. One of the more amusing things is how what is described in the film has filtered into popular mythology and has featured in a number of other films, including the tv mini-series The Triangle (2005), Outpost (2007), 100 Million BC (2008) and The Dyatlov Pass Incident (2013), as well as The X Files episode Død Kalm (1995).