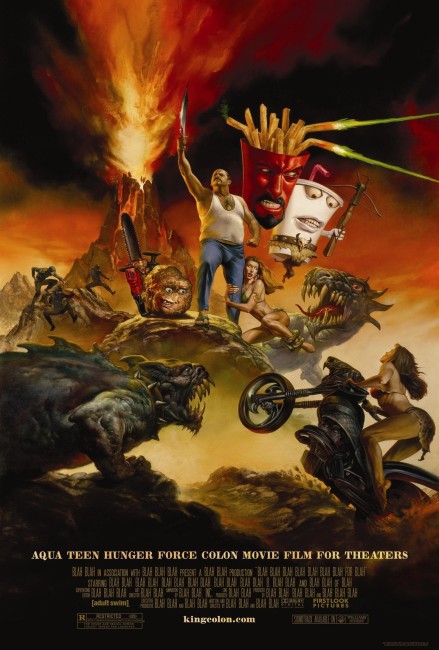 The Aqua Teen Hunger Force consists of three animate items of junk food – the milkshake Shake, the packet of French Fries known as Frylock and the meatball Meatwad – who live in a house in New Jersey. Meatwad attempts to set up an Insanoflex exercise machine but it is missing an essential component. Unknown to them, the Insanoflex has been created by alien Plutonians and has the potential to become the most powerful weapon in the world. However, the Plutonian’s Cybernetic Ghost has removed the screw that holds the Insanoflex together. The Aqua Teens find the screw in the home of Dr Weird, which has just been converted into a cliffside apartment complex. Once the screw is put in place, the Aqua Teens’ neighbour Carl gets into the Insanoflex, which promptly turns into a deadly transformer robot that rampages through the city.

Aqua Teen Hunger Force (2000-15) was an animated tv series that aired on the US Cartoon Network. The Aqua Teens originally appeared on Space Ghost Coast to Coast (1994-2004), where all the principal creative talents behind the series worked, and then the characters were spun out as their own series. It was part of the Cartoon Network’s Adult Swim section, which was set up to air animation with more adult sensibilities. In the initial seasons, the characters were a crime-fighting force but this was abandoned as episodes became increasingly more surrealistic. The show’s wacky humour and absurdist non-sequitirs have gained it a cult following. As the thinking goes with various other cult animated series, if there is an audience on the small screen then it is fair to count on finding one on the big screen – as witness big screen spillovers like Beavis and Butt-Head Do America (1996), South Park: Bigger, Longer & Uncut (1999) and The Simpsons Movie (2007).

I must admit to having no experience with Aqua Teen Hunger Force before sitting down to watch Colon Movie for Theaters. As soon becomes more than apparent, the film is one that has been pitched directly to the cult audience of the tv series. It may have helped to have prior familiarity, although it was not difficult to insert oneself into the film’s milieu. That said, you need to be a fan of the tv series cultiness in a big way to ‘get’ the film. I am afraid that I didn’t.

Aqua Teen Hunger Force Colon Movie Film for Theaters is very much a film that seems consumed with the effort to be culty, absurdist, surreal and scatological. Unfortunately, Colon Movie for Theaters is stuck with seeming like it is trying to be a South Park (1997– ) wannabe. The humour seems forced – the measure of the film is surely that it feels more a case of a group of people trying to be surrealistic, wacky, scatological etc than it is a film of gags that are ever funny.

Crucially what the film lacks is anything that is clever, as opposed to simply absurdist and non-sequitir. It keeps tossing one bizarre deadpan thing after the other at the audience. Case in point is the opening sequence set in Ancient Egypt that to wit features:- the heroes emerging from a pyramid and escaping in a dune buggy while trying to tune into Sand Classic Rock, a giant menacing poodle, pursuing FBI agents and a time-travelling Abraham Lincoln who helps them escape in a rocket. (It should also be pointed out that nothing that happens in this sequence has any relevance to anything that happens elsewhere in the film). Even the gag that opens the sequence, the title card:- “Egypt. Millions of Years Ago, 3 p.m., 1922” has been borrowed from Caveman (1981).

Indeed, the film’s very title seems to be trying to mimic the extruded, grammatically skewed name of the hit Borat: Cultural Learnings of America for Make Benefit Glorious Nation of Kazakhstan (2006). All of which is fine for audiences that seem to regard certain types of animation as the equivalent of getting stoned, but even then a tv show that has a cult audience at around ten minutes in length seems excruciatingly strained when dragged out to feature length.

There are a couple of times that the film did engage. I did like the alien invaders that have been modelled on the old Space Invaders game that come in square digital blocks and inch along the screen in two-dimensional directions at a snail’s pace. The one gag that does work rather amusingly is the opening scene parodying the old 1950s movie theatre refreshment ads with an anthropomorphised hot dog, drink of soda, ice cream and bucket of popcorn dancing along like the Andrews Sisters singing lyrics like: “Don’t pull your penis until you really need to/Indecent Exposure is a Class 2 Felony”, before the sequence is taken over by a pretzel, ice cream, nacho and hamburger death metal act who send the more wholesome candy bar items fleeing as they sing lines like “Your money is now our money and we will spend it on drugs” or “Did you bring your baby? … Run it over after the show” and make threats about cutting up people with linoleum knives and how Satan will dissolve their testicles with acid if people are caught talking through the movie, give the plot away or make copies of the film. Colon Movie Film for Theaters needed more of this fast and sarcastic humour rather than the aimlessly surrealistic and torpid gags that it circles around.