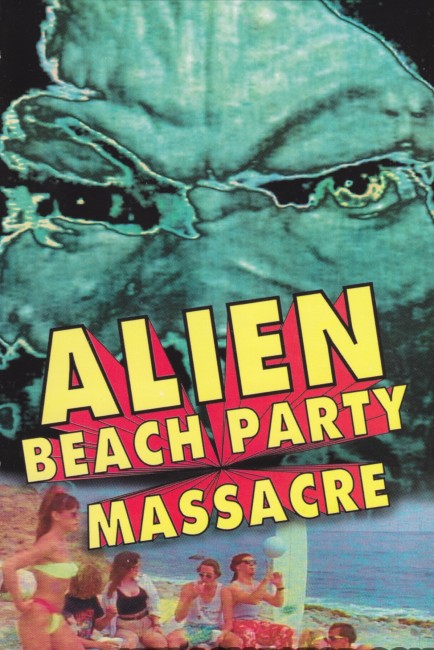 A ship of the alien Mirusians are fleeing, pursued by the Ghastorian warlord Lord Odem who wants the Deathsphere weapon they possess. However, the bumbling ship’s janitor Nagillig drops the Deathsphere just before the ship is shot and damaged. They head for the nearest planet – Earth. Crashlanding in Los Angeles, Nagillig is the only survivor and sets out to find where the Deathsphere has landed. The search takes him to the beach where the sphere has been found by a group of partying surfers and mistaken for a volleyball. Nagillig is assumed to be a visiting cousin from New Jersey. As the surfers head to an abandoned house to party, Lord Odem and his Number Two have been lurking and turn the house into a death trap.

I get that Alien Beach Party Massacre is parodying the genre but it is an excruciating film on almost all levels. This is no more clearly indicated than during the opening moments, which consist of some eight minutes of scenes aboard the alien ship as it is shot at and crashlands on Earth. Even aside from the shabby effects, what kills these scenes is the fact that all of the aliens are dubbed in squawky high-pitched voices like a tape recording that had been sped up. I suspect anybody would have to be incredibly dedicated to watching this film to make it past these scenes without giving up.

If you make it through to watch the rest of the film, it does improve marginally (if only by the fact that the helium voices disappear bar occasional cutaways to the pursuing heavies). Nevertheless, none of it moves beyond what is well and truly a black star film. The acting all around is fairly bad. Most of the characters are morons and the attempts at comedy are lame. There are lines that make you do a double-take: “Man, she is a goddess,” says one of the guys, “I’d sell my entire record collection just to sniff her bicycle seat.” The success of Bill and Ted’s Excellent Adventure (1989) popularised Valley speak and so we have three surfer characters peppering their dialogue with a preponderance of terms like ‘dude’, ‘bro’, ‘bogus’ and so on. (That is not as annoying as the scientist character played by co-writer George Willis who repeatedly pronounces escape as ‘ick-scape’ inspiring my inner pronunciation Nazi to thoughts of violence).

For some reason, the surviving Mirusian janitor is named Nagillig, which is Gilligan spelt backwards – one wonders if this is not some cryptic reference to tv’s classic castaway show Gilligan’s Island (1964-7). Despite the title, the beach party location is abandoned about halfway through for a big old mansion where the alien Number Two stalks the teens through in what in effect becomes an alien slasher film of sorts.

Alien Beach Party Massacre was the one and only film ever directed by Andy Gizzarelli who, outside of that, does have a couple of credits as a producer. Nobody else involved appears to have gone on to anything else either.