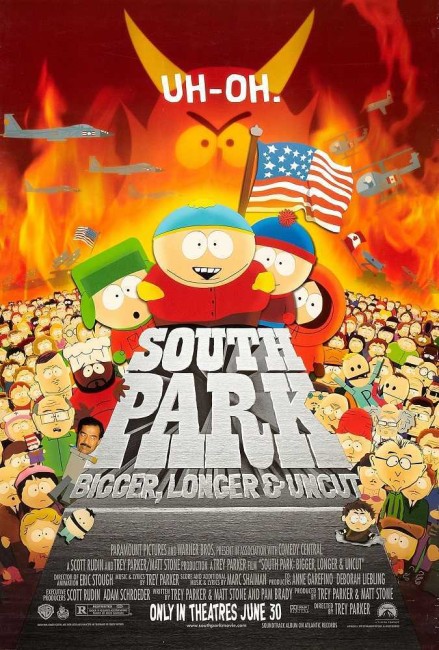 In the town of South Park, young Stan Marsh, Eric Cartman, Kyle Broflovski and Kenny McCormick sneak in to see the R-rated film ‘Asses of Fire’ featuring the Canadian comics Terence and Phillip. Immediately after, they start copying the copious foul language used in the film. Outraged at this, Kyle’s mother creates the organisation Mothers Against Canada and begins a campaign to have ‘Asses of Fire’ banned. During an appearance on the Conan O’Brien show, she conducts a citizen’s arrest of Terrence and Phillip. This causes the two countries to mobilise towards war. Meanwhile, in attempting to copy a stunt from the film in which they light their farts on fire, Kenny is killed and goes to Hell. There he sees that Satan and Saddam Hussein have become lovers and are plotting to use the war against Canada to take over the Earth. Kenny also sees that Satan is becoming tired of Saddam’s constant demands for sex and not respecting his feelings. As the war with Canada gets underway, plans are made to hold the public execution of Terrence and Phillip at a USO rally. Stan, Cartman and Kyle join forces with the freedom fighter known as The Mole in a plan to rescue Terrence and Phillip.

South Park (1997– ) became one of the hit animated shows of the 1990s/00s. The show has its beginnings when creators Trey Parker and Matt Stone first made a four-minute short entitled The Spirit of Christmas (1992), which was subsequently known as Jesus vs Frosty, using cardboard cut-out characters. Here we see embryonic versions of the South Park quartet, albeit mostly unnamed, as they deal with an evil snowman come to life, before defeating it and realising the true meaning of Christmas – to receive presents. This became a viral video on the internet, whereupon Parker and Stone were commissioned by a 20th Century Fox executive to make another animated short for private distribution. This, also entitled The Spirit of Christmas (1995), subsequently known as Jesus vs Santa to avoid confusion, was five minutes in length and featured a similar plot with the kids witnessing Jesus and Santa battling it out. This became a hit in distribution and inspired executives at Comedy Central to hire Parker and Stone to develop a show. The result was South Park.

South Park is a show that sets out to offend everybody. Initially, the series was centred more around scatological and foul-mouthed humour but, as it went on, Parker and Stone’s humour became more sophisticated. They began to take potshots at numerous celebrities, public figures and issues of controversy, firing off at both sides of the political spectrum and conducting a number of biting attacks on religion – most controversially the Catholics (in an episode featuring the Virgin Mary menstruating on the Pope), Scientology (the infamous Tom Cruise ‘in the closet’ episode that had Cruise forcing Comedy Central to drop the episode from re-runs) and Islam, the one episode that was finally banned by Comedy Central who were afraid of jihadist reprisals.

The show, which makes a virtue of its low-tech animation, is mostly known for its absurdist humour, including Jesus Christ as a resident of the town, a talking poo named Mr Hanky and appearances from Satan, Santa and other surreal figures, which makes South Park one of the few modern inheritors of the Menippean Satire.

South Park: Bigger, Longer & Uncut was a film spinoff made during the show’s second season. Bigger, Longer & Uncut has a celebrated reputation. It has been included on some Best Animated Films lists, while the song Blame Canada was even nominated for an Academy Award (reportedly because it was the only PG-rated one in the film). Bigger, Longer & Uncut also holds the world record for the most four-letter words used in an animated film (something like one every six seconds apparently).

I missed seeing South Park: Bigger, Longer & Uncut during its initial theatrical release. My misfortune was to come to it some time later, after having seen Parker and Stone’s Team America: World Police (2004) and some of the later seasons of South Park. It is there that the satire and taboo-baiting challenges that the film conducts seem somewhat the lesser – subsequent seasons of the tv series built the satire with much sharper and more absurd bite, while the low-tech animation became more polished.

South Park: Bigger, Longer & Uncut sets out to be rude and offensive. The bulk of the plot readily launches into the debate on R-rated material influencing children and about foul-language on the airwaves that was raging at the time that the film came out – indeed, South Park was the prominent target of ire by real-life concerned parents groups, while the copious foul-language in Bigger, Longer & Uncut upset a surprising number of people even though the film comes with an R-rating. As with much of Parker and Stone’s product, they happily name and poke fun at celebrities, with Brooke Shields, Conan O’Brien and Winona Ryder being in their target’s eye.

The Canadian Minister of Film is seen apologising for the country having produced Bryan Adams and there is even a scene where one of the generals shoots Bill Gates in the head. Like Michael Moore’s sole work of fiction Canadian Bacon (1995), South Park: Bigger, Longer & Uncut is an American film that takes satiric aim at Canada where clearly both works regard their neighbour’s friendliness and lack of overall aggressiveness as either an objective of derision or personal ire (it is hard to decide which). Canadians oddly enough love the film.

As with much of Parker and Stone’s humour, there is the downright bizarre and surreal. One of the running subplots is Kenny (who is always killed somewhere throughout every episode of South Park and inexplicably alive again by the next episode) ending up in Hell where he witnesses Satan and Saddam Hussein as gay lovers. This comes with decided amusement – the image of Saddam in bed waggling a dildo and yelling ‘Oh yeah, be my bitch” while Satan feels increasingly dissatisfied at being used for sex and that Saddam does not respect his feelings. At one point, Satan is seen sitting in bed reading a book entitled Saddam is From Mars, while later he has a dippy love song about being lonely and feeling that he does not fit in in Hell.

There was a subsequent South Park film with the dvd-released South Park: Imaginationland (2009), although this was merely edited from a three-part episode of the tv series.

South Park‘s creators Trey Parker and Matt Stone met at the University of Colorado in the early 1990s and became best friends. They started making films as students, beginning with the Spirit of Christmas shorts, and have remained a partnership since. They first branched into live-action with Alferd Packer: The Musical/Cannibal: The Musical (1996) made while they were still in college, a musical-comedy retelling of the story of a true-life cannibal that comes in their characteristic wackily absurd style. Parker, with Matt Stone as an associate, then went onto direct and star in Orgazmo (1997), a parody film about a Mormon who becomes a porn star and a superhero. Then came South Park and Bigger, Longer & Uncut. They followed it with one further film, the hilarious and wilfully offensive puppet show Team America: World Police (2004). Elsewhere the duo have also made the satirical comedy tv series That’s My Bush (2000-1), a satire on the private life of George W. Bush for Comedy Centrals, which lasted for eight episodes.