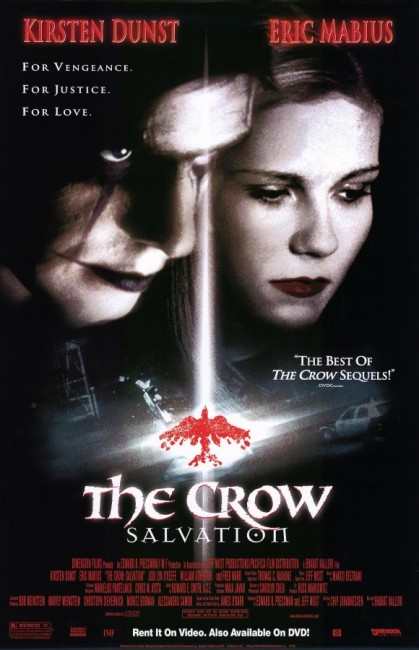 Alex Corvis is sent to the electric chair for the murder of his girlfriend Lauren Randall. Right up until his execution, Alex protests his innocence, claiming that he was framed by a man with scars on his right arm. After the execution, Alex returns to life in the morgue, finding that he is now invulnerable to damage. He sets out to find the identity of the scarred man where he gradually discovers that he was framed by a group of corrupt police officers whose secrets Lauren uncovered.

The Crow: Salvation was the third of the Crow films. The original The Crow (1994) has become a cult film and spawned a cinematic sequel The Crow: City of Angels (1996) and then a tv series The Crow: Stairway to Heaven (1998), as well as various works of original fiction.

The Crow: Salvation looked as though it is likely to be the end of the cinematic series – in a release campaign that must take some prize for intelligent strategies, the film was released to only a single theatre in Spokane, Washington where the first two films had played for a long time. To no particular surprise, The Crow: Salvation bombed (thanks to lack of any build-up) and the film was subsequently dumped straight to video without any further theatrical release. The series was however continued with a further sequel, The Crow: Wicked Prayer (2005), while a remake of the original has been announced for the 2010s.

The Crow: Salvation has a good deal more potential to it than The Crow: City of Angels, which slavishly copied the original. This time, rather than the victim of a gangland execution, the anti-hero is an innocent person sent to the electric chair. (Here the white clown makeup is interestingly explained as being burn marks from the execution). While the film does not stray too far from the same theme of the undead avenger killing off a line of gangland hoods responsible for his death, the avenger plot is at least conducted with some originality – here it is turned into a mystery where the hero is uncovering a conspiracy among dirty cops who had him framed. Fred Ward in particular has great presence during the latter half of the film. As the central figure, Eric Mabius has a nicely sardonic line – he’s not another Brandon Lee but neither does he have the blandness that Vincent Perez did in City of Angels.

Unfortunately, where The Crow: Salvation falls down is in the thoroughly banal direction. There is none of the slickly exciting handling of Alex Proyas in the first film or even the stylised Gothic look that Tim Pope brought to City of Angels. Director Bharat Nalluri copies the crow-eye vision cruising across the rooftops and the look of the slick dark streets from the original but they are being conducted on a B-budget and have a thorough routineness and lack in any atmosphere.

Bharat Nalluri is like a hack B action movie director and throws in gratuitous and routinely conducted car chases and helicopter explosions. (Although there is one cool effects scene where Eric Mabius blows his own head off with a handgun and it immediately reconstitutes). Despite an original take on the story, it is Bharat Nalluri’s direction that kills the film. The more one thinks about it, if series producer Edward R. Pressman had taken the script from The Crow: Salvation and put it together with the stylism offered by City of Angels‘s Tim Pope, we could have had one worthwhile sequel instead of two forgettable mediocrities.

The career of Bharat Nalluri failed to much go anywhere after this. He has mostly worked in British television, although has made the odd subsequent film including Miss Pettigrew Lives for a Day (2008), Spooks: The Greater Good (2015) and The Man Who Invented Christmas (2017).

It would have been equally interesting to see what might have happened if the producers had gone ahead with the version originally planned to be scripted and directed by heavy/industrial metaller Rob Zombie, of House of 1000 Corpses (2003) and Halloween (2007) fame, before clashes between Zombie and the producers ended up with his being fired.