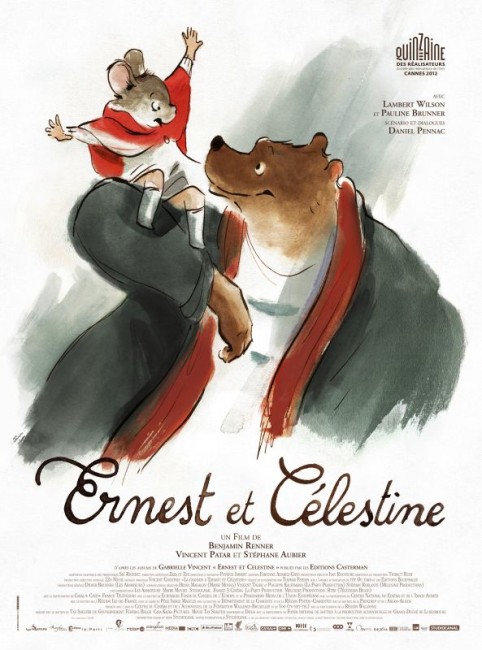 In the orphanage, the mouse Celestine is rebuked for drawing pictures of a friendly bear and is told that bears are meant to be scary. Celestine is a student at the mouse dentist school where the pupils are sent aboveground to scavenge bear molars, which are considered the rest replacement for mouse incisors. Sleeping in a garbage can after being chased out of a house, Celestine is found by the bear Ernest who has had all of his busking equipment confiscated by police and is hungry. She begs Ernest not to eat her and shows him how to sneak into a candy store. Celestine is in trouble for not bringing enough teeth back from her foraging expedition. And so she returns aboveground and begs Ernest’s help in breaking into a bear tooth store. The teeth are held in the safe and she requests Ernest’s help in carrying the safe back underground. However, when it is revealed that she has brought a dreaded bear underground, the mouse police hunt her and Ernest. The two of them take refuge at Ernest’s cottage in the woods where Celestine begs Ernest to let her stay. There a friendship grows between the two of them. However, the authorities from both the bear and mouse worlds pursue the two of them as wanted criminals.

Ernest and Celestine is a film based on a popular series of French children’s stories by Belgian writer Gabrielle Vincent, which consists of 25 books published between 1982 and 2004. The film rights were much sought during Vincent’s life but not obtained until after her death in 2000.

The film version has been directed by Stephane Aubier and Vincent Patar, the cult duo who previously made the wacky stop-motion animated A Town Called Panic (2009), who share the credit with newcomer Benjamin Renner. Although for those coming to Ernest and Celestine expecting more of the sublime nuttiness of A Town Called Panic, this film’s tone is much gentler and softer than the gonzo nuttiness of the other film – although both films take great delight in visual gags.

The animation comes with a beautiful child-like simplicity, akin to watercolours brought to life (something that closely mimics the illustrations in Gabrielle Vincent’s original books). It gives the film an impressionistic simplicity where its effect rests with the characters and their situations on their own without any artifice. You keep comparing Ernest and Celestine to a Hollywood animated film and the lack of quickshot gags, contemporary culture references, cutsie sidekicks and constant flashy determination to impress with artistic detail is noticeable by its absence.

The magic of the film is the cheerful relationship between the ungainly Ernest and the tiny Celestine. Aubier, Patar and Renner create some side-splitting visual gags – Celestine’s attempts to hide from the bear police in a bear mask, the camouflage painting of the van, throwaway shots of mice doing push-ups with the bars of mousetraps. The scenes of grudging friendship as the two cohabitate in Ernest’s house are entirely charming – when Celestine says at the end that all she wants is to go and live with Ernest, you are entirely won over by the film.