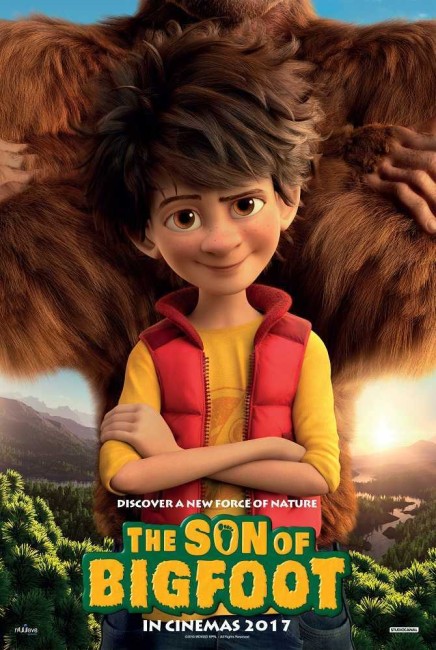 In Portland, Oregon, Adam Harrison is tormented by school bullies who put chewing gum in his hair. His mother is forced to cut his hair to get the gum out and Adam is startled when it all grows back the next day. His feet also burst out of his sneakers. Adam makes the discovery that his father, a scientist that his mother had told him was dead, is alive and has been corresponding with her. Adam hitchhikes out to the address in the woods listed on the letters. There he meets a hairy Bigfoot creature that reveals it is his father who has a unique genetic condition that causes members of the family to grow hair and big feet. They are tracked by Wallace Eastman, the ruthless CEO of HairCo, who is determined to capture Adam’s father and get the secrets of his DNA, the reason he went into hiding in the first place. Adam’s trek into the woods has inadvertently revealed Dr Harrison’s location and he is captured by Eastman’s men. It is up to Adam and the animals of the woods to rescue him.

The Son of Bigfoot was the sixth film from the Belgian animation studio nWave Pictures. They had previously made the likes of Fly Me to the Moon (2008), A Turtle Tale: Sammy’s Adventures (2010), The House of Magic (2013), Robinson Crusoe/The Wild Life (2016) and The Queen’s Corgi (2019), which have enjoyed modest international success.

There have been a quite reasonable number of Bigfoot films ever since the 1970s that have ranged from horror, mockumentary/Found Footage and environmentalist. There have also been a number of family friendly Bigfoot films beginning with Harry and the Hendersons (1987) through the likes of Bigfoot (tv movie, 1987), Bigfoot: The Unforgettable Encounter (1994), Little Bigfoot (1997), Big and Hairy (1998), The Sasquatch Gang (2006) and Missing Link (2018). (For a more detailed overview see Bigfoot Films).

It is however a misnomer to call The Son of Bigfoot a Bigfoot film. Bigfoot/Sasquatch is believed to be a large, ape-like anthropoid creature that lives in the woods of North America and is shy, retiring, sometimes portrayed as monstrous. On the other hand, this is a film about a family who have a gene that makes them develop hair all over and feet that burst out of their shoes. That’s it. There is no Sasquatch creatures, just the implication that the family are mistaken for Bigfeet. (This is something that fails to explain all the supposed Bigfoot sightings across the continental United States going back to the 1960s and earlier).

The film is formulaic. There’s a teen with absent parent issues. There’s a hissable black hat villain who is only there to drive the plot by needing the father’s hair for his formula – how more lame a motivation can a super-villain have than that? And there’s are a bunch of smart-ass talking animal sidekicks that join in for a caper that takes up much of the second half of the film. The animation is passable although nothing that is going to give Pixar and DreamWorks sleepless nights.

The main problem I had with The Son of Bigfoot is that it stumbles into the typical inanities that people think are requirements for a modern animated film. Thus we get inane sequence with Adam and his father skateboarding (?) through the woods on a log as a bland pop song plays on the soundtrack. The slapstick caper with the talking animals breaking into the villain’s factory takes up much of the latter sections of the show. We gets scenes with squirrels spouting smartass lines like “You gonna read me my rights?” Or the end with the racoon putting on a blonde wig and rocking out while yelling “Metal!!!!”