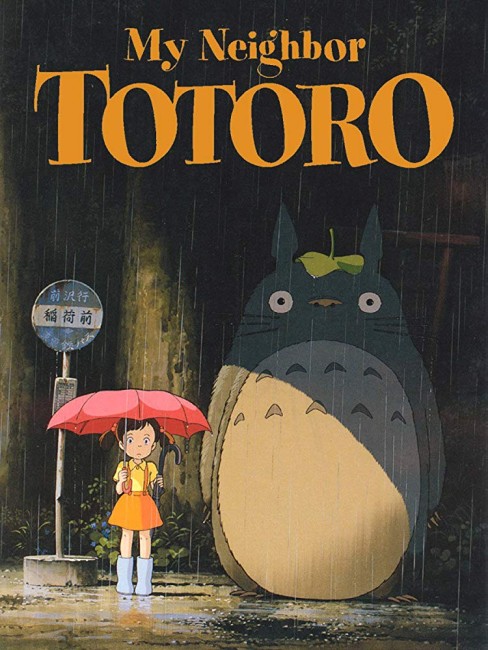 With their mother sick in hospital, Satsuki and her younger sister Mei move to a house in the countryside with their father. Mei delights in exploring the new surroundings, finding what she calls ‘dustbunnies’ – creatures made of soot – scurrying through the house. One day Mei strays into the undergrowth and comes across a giant furry creature. The creature, which she names Totoro after the creature in a picture book, is friendly and plays with her. Satsuki is amazed to find that Totoro is real after it joins them while they are waiting for their father at the bus stop. She lends it an umbrella as it starts to rain and Totoro continues to return to them. After their father is called to the hospital in an emergency and Mei goes missing, Satsuki is forced to call upon Totoro’s help in finding her.

It is only in the 00s with the acclaim enjoyed by works such as Princess Mononoke (1997), Spirited Away (2001), Howl’s Moving Castle (2004) and Ponyo on a Cliff By the Sea (2008) that Japanese animator Hayao Miyazaki has begun to be discovered by the English-speaking world. Of course, Hayao Miyazaki had been wowing anime fans since at least the mid-1980s. Miyazaki worked as an animator and then a director on various tv series in the late 1970s.

Miyazaki first emerged as director with the slapstick caper film The Castle of Cagliostro (1980) and then went onto other works like the stunning environmentalist post-holocaust film Nausicaa and the Valley of the Wind/Warriors of the Wind (1984), the air adventure story Laputa: Castle in the Sky (1986), Kiki’s Delivery Service (1989) about a young witch, and Porco Rosso (1992) about a porcine aviator. With the English-language world’s discovery of Hayao Miyazaki, his back catalogue of films were all brought up and redistributed by Disney.

My Neighbor Totoro is one of Hayao Miyazaki’s best films. It was his first venture into the genre of shoujo anime – animation that features young girls – which almost all of his subsequent films do. My Neighbor Totoro is mostly a film about a love of childhood imagination – of exploring a new house, of imaginary creatures, of finding secret hiding places at the bottom of the garden. Beneath these delights, Miyazaki touches on some genuinely adult emotions – the girls abandoned alone fearfully waiting for their father’s bus to return or the panic after the arrival of the telegram when the mother is believed to be in a critical condition. (Miyazaki says that Totoro was very much a reflection of his own childhood when his own mother was very ill).

The emergence of the fantastic comes with utter charm – the tiny soot creatures (which would make a later reappearance in Spirited Away) scurrying through the house; the comically bizarre appearance of the strange ghost creatures that Mei follows into the undergrowth; her discovery of the giant Totoro and the innocent play they engage in as she rolls about with abandon on its furred stomach. Especially lovely is the appearance of Totoro as the girls wait at the bus stop, Satsuki lending him an umbrella and her hilarious reactions to Totoro’s puzzling over the raindrops dripping onto the umbrella from the tree above, and then the appearance of a creature that is sort of a combination of a bus and the Cheshire Cat, something so out there that it leaves the entire audience momentarily dumbfounded.

One of the great joys of the film is that Totoro and the creatures just are – Hayao Miyazaki sees no need to explain their nature or their eccentric behaviour – there is a wonderfully eccentric little nonsense scene where the children and creatures dance in the garden and leap up over a tree on a spinning top. The ending where Totoro and the cat bus come to Satsuki’s aid in finding the missing Mei is magical and absolutely lovely.

My Neighbor Totoro is laidback when it comes to plot – mostly it is a film about friendships, about childhood imagination and about children dealing with strong and disturbing emotions. One of the great strengths that has matured throughout Hayao Miyazaki’s films as he has begun to find his feet as an animator is the contemplative beauty of the animation, of landscapes created for the pure beauty of doing so. My Neighbor Totoro comes filled with an exceptionally realised depiction of country life and the very ordinariness of the house, the surroundings and life amongst it. It is a beautifully simple and unassuming film. As a children’s film, it is absolutely perfect.