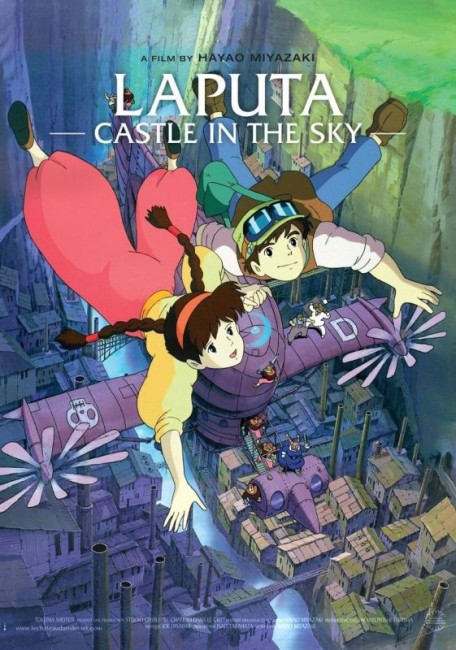 A young girl Sheeta tries to escape as the Dola pirates raid the airship she is travelling in but falls over the side. However, the crystal she wears around her neck activates and mysteriously causes her to gently float to the ground. She is caught by the mining boy Pazu who offers her shelter. Soon the Dola pirates, ruled by the fearsome Mama, as well as a group of heavily armed soldiers come after her. She and Pazu flee. During the course of their flight, Pazu learns that she is a descendant of the people of the mythic floating city of Laputa. They are captured by the soldiers led by Colonel Muska, who desires the crystal, seeing it as being able to lead the way to Laputa and unlock its technologically advanced secrets. Making an escape and joining in a tenuous truce with the pirates who take them on as crew, Pazu and Sheeta race Muska to be the first to find Laputa.

Hayao Miyazaki is one of the modern masters of Japanese cinema and is almost certainly the finest animator at work in the world today. Miyazaki first appeared, working as an animator and then director on various Japanese animated series – Lupin III (1971-2), Panda! Go Panda! (1972), Heidi (1974), A Dog of Flanders (1975) and Future Boy Conan (1978) – before making his directorial debut with the slapstick caper film The Castle of Cagliostro (1980). Miyazaki subsequently went onto direct stunning works like Nausicaa in the Valley of the Wind/Warriors of the Wind (1984), Laputa, My Neighbor Totoro (1988), Kiki’s Delivery Service (1989), Porco Rosso (1992) and the international hits of Princess Mononoke (1997) and Spirited Away (2001), followed by Howl’s Moving Castle (2004), Ponyo on a Cliff By the Sea (2008) and The Wind Rises (2013).

Miyazaki formed Studio Ghibli in 1985 due to his dissatisfaction with working for others and Laputa: Castle in the Sky was the first film to emerge under the Studio Ghibli banner. As such, Laputa: Castle in the Sky can be surely regarded as Hayao Miyazaki’s first fully realised film. Both The Castle of Cagliostro and Nausicaa were made with a limited traditional anime style, but with Laputa one can see the blossoming of Hayao Miyazaki’s extraordinary visual strengths and beauty.

There is always a great love of flying in Hayao Miyazaki’s films – the numerous airships, bombers, biplanes and novelty flying machines that turn up in in particular Nausicaa, Kiki and Porco Rosso. Most of Miyazaki’s young heroines seem to like flitting about on highly manoeuverable one-person flying machines – Nausicaa’s flying surfboard, Kiki’s broomstick.

There is also a great liking, at least in Miyazaki’s earlier films, of slapstick comedy capers. Many of the nutty chases scenes here with the pirates running around a railroad track in a car, the parody of mano-a-mano confrontations between pirates and miners, or the scenes aboard the airship with the pirates joining Sheeta in the kitchen could easily have been transplanted from the manic delirium of The Castle of Cagliostro.

Like several of Hayao Miyazaki’s films, Laputa: Castle in the Sky gives the impression of taking place in an almost-familiar alternate world. In this case, it feels that Miyazaki has constructed an alternate world out of Victorian airship fantasies, in particular the illustrations of Albert Robida – the fabulous array of airship sketches that take place over the opening credits are pure Robida. (The title of the film is incidentally taken from the third book of Jonathan Swift’s Gulliver’s Travels (1726) where Laputa was a flying island of mad scientists that Gulliver travels to). This world is conjured with an extraordinary sense of detail – from the workings of the mine machinery to Pazu’s quaint brickwork house.

There is a wonderful array of vehicles and inventions from the ramshackle Model Ts that the pirates steal to the soldiers in their heavily armoured train to the fort, all designed in retro technology and with German uniforms circa World War I. Most wonderful of all are the scenes aboard the pirates’ airship, which looks so realistic in detail that one is sure the ship could actually fly – with clamps to accept the arriving ornithopters, steam-powered machinery, seeing people climbing the side of the ship to the crow’s nest, even tiny details like Pazu winching down the side of the balloon to work or the washing hanging on the deck, and especially the image of the tiny glider being tossed about in the storm as it trails behind the ship on a rope.

Laputa: Castle in the Sky has a breathtaking opening – the fabulous image of the giant airship gracefully cruising through the clouds, followed by the arrival of the pirates on their buzzing dragonfly-like ornithopters, their boarding amid a series of shootouts and then Sheeta escaping by hitting Muska over the head with a bottle and climbing out a window onto the epidermis of the airship, only to fall straight down into the clouds. It is a dazzling opening that leaves one gape-jawed.

There are a number of similarly stunning sequences, like where Sheeta manages to awaken the damaged robot in the castle and it goes on a rampage of destruction, smashing up the castle and blasting in all directions with the heat ray from its eye. Here Hayao Miyazaki manages to prefigure some of the fabulous scenes of mass destruction that became all the thing in anime following Katsuhiro Otomo’s Akira (1988) soon after this. Although, Miyazaki also manages to contrast all this mass destruction with scenes of great tenderness, not unakin to The Iron Giant (1999), as we see the giant robot tending the girl.

We also see here for the first time the emergence of Hayao Miyazaki’s contemplative, almost painterly, pastoral backgrounds. The film is filled with exquisite landscapes and shots of the airship drifting through the clouds, which part to show valleys and tiny patterned fields below. There is a stunningly lovely shot early on in the piece where Pazu gets up in the morning and releases his pigeons, letting them fly down into the valley as the sunrise comes through the canyon walls, lighting up the houses arrayed about, while he stands on his rooftop playing the trumpet.

The most beautiful vistas of all come when the film arrives at the land in the clouds, which is filled with fallen and overgrown colonnades, giant windows open to the sky, ruined walkways and columns that abruptly end in mid-air, entire cities lying buried beneath pools of water, strange dragonflies and bunny creatures flitting through the background, images of the giant robots overgrown with moss and tiny creatures frolicking across them. There is a genuinely melancholy beauty to these scenes. Here Laputa touches the same sense of awe that the journey through the remnants of the Krell machinery held in Forbidden Planet (1956).

Eventually, one realises that another Hayao Miyazaki theme has come into play – the heroine’s realisation that she must reject the wondrous technology and military might of her birthright and accept a return to a harmony between Earth and nature. An almost identical variation on the theme played out in Nausicaa. In the end, what we have falls in the story patterns of the lost world film – where explorers discover a lost city filled with the technological marvels of a forgotten civilisation, before it is naturally blown up. In this case though, the journey there and the loveliness and splendour of the scenery that Hayao Miyazaki arrays around the film makes Laputa stunning.