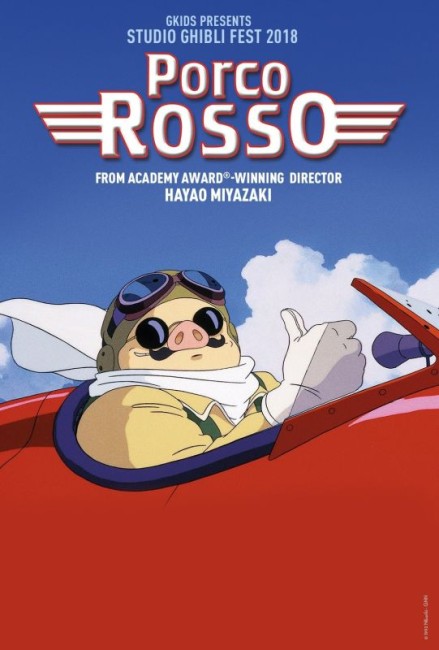 The islands of the Adriatic in the 1930s. Porco Rosso is a former pilot who has been turned into a pig by a curse. Porco operates as a bounty hunter in his seaplane, taking on various other pirates of the air, including the notorious Mamma Aiutos. He holds a secret love for Madame Gina who sings at the Hotel Adriano, the island where all the fliers gather. The brash American flier Donald Curtiss takes Porco on in a dogfight. After Porco crashes due to engine failure, Curtiss claims that he has shot Porco down. Porco limps to Milan to seek the aid of the engineer Piccolo in rebuilding his plane. The job is conducted by Piccolo’s 17 year-old niece Fio. Porco is forced to take off as the Italian Fascists come, with Fio insisting on coming along too. He heads to a confrontation in the skies with Curtiss where the two agree upon a wager – if Porco wins Curtiss pays his debts, but if Curtiss wins he claims Fio as his bride.

Hayao Miyazaki has gained a reputation as perhaps the finest animation director in the world. The public only began to appreciate Miyazaki with Princess Mononoke (1997), Spirited Away (2001), Howl’s Moving Castle (2004) and Ponyo on a Cliff By the Sea (2008). However, those who have watched anime long before it became fashionable have known Hayao Miyazaki’s name for stunningly beautiful and almost criminally ignored works like The Castle of Cagliostro (1980), Nausicaa and the Valley of the Wind/Warriors of the Wind (1984), Laputa: Castle in the Sky (1986), My Neighbor Totoro (1988) and Kiki’s Delivery Service (1989), which were only rediscovered in the West in the early 2000s. Porco Rosso is one of Hayao Miyazaki’s lesser-known films.

Porco Rosso apparently had its origin as a 20 minute short that Miyazaki was hired to make by Japan Airlines. Miyazaki so liked the concept of the pig aviator that he expanded it as a feature film. The film is an enormous degree of fun. Hayao Miyazaki’s films tend to stretch between epically beautiful fantasy usually told from a young girl’s perspective – My Neighbor Tortoro, Kiki’s Delivery Service, Princess Mononoke, Spirited Away – and a love of comic adventure – such as the slapstick delights of The Castle of Cagliostro and Laputa.

Porco Rosso falls into the latter category. It is Hayao Miyazaki relaxing and having fun. Miyazaki has a clear love of flight and airplanes – an interest that also runs through Nausicaa, Laputa, Howl, Kiki and especially The Wind Rises, the biography of a Japanese airplane designer – in particular the fantasy of the World War I-era aviator. Indeed, Porco Rosso might be described as falling somewhere between Biggles (1986) and Charlotte’s Web (1973), combined with the slapstick capers of Miyazaki’s Cagliostro. Although in style, what Porco Rosso ends up resembling more than anything is an animated version of Hergé’s Tintin comics, especially when it comes to the characterisations of the pirates.

The opening sequence is a delight, with Porco flying into action, taking on the Mamma Aiutos in an air and sea battle, where the brisk action is undercut by the abducted girls’ swimming team who succeed in overrunning the pirates’ seaplane, with Porco even seen heading back with a clothesline strung up drying out their clothes. There is a charming nuttiness to the images of squadrons of pirates in the air communicating with one another through a cacophony of loudhailers, or Porco and Curtiss’s continuing on fighting after their guns mutually jam by throwing spanners at one another between planes.

Hayao Miyazaki does adolescent and pre-adolescent girl characterisations – even in an overtly comic film as here – like no other animation director and the character of Fio, whom Porco grudgingly accepts as sidekick, is wonderfully conducted. One of the great charms of the film is that its central character is a talking pig in a world of humans. This is something that just is – there are allusions made to a curse having been placed on him, but Miyazaki never deigns to explain any further than that.

All of Hayao Miyazaki’s work can be seen as having charted a course away from the light comic anime of the various tv series he worked on through the 70s and films like The Castle of Cagliostro to the increasing absorption in worlds of epic fantasy and stunning emotional transcendence as found in Princess Mononoke, Spirited Away etc. Miyazaki has mastered a form of animation that is breathtaking in its depth. Even though Porco Rosso is a comic film, it is filled with some stunningly beautiful sky and cloudscapes, of shots of planes flying through skies that are there for the sole purpose of artistic beauty.

Indeed, the plot is fairly laidback and one senses only there to allow Miyazaki to indulge himself comically and artistically. There is an extended side trip to Milan in the middle of the film for no purpose other than the loveliness it allows Miyazaki to indulge in creating detailed backdrops of the city and montages of women at work repairing the plane.

The most breathtaking image in the film is the flashback to the story that Porco tells Fio – of how during Wartime combat he suddenly found himself floating on a sea of cloud that stretched from horizon to horizon with pure blue sky above, broken only by a band stretching across it. As we watch, he is suddenly joined by his comrades who silently fly up pass him and into the band, which upon closer inspection is revealed to be filled with the planes of downed flyers. It is an image that momentarily suggests something of the afterlife of downed fighter pilots that we saw in Wartime fantasies such as A Guy Named Joe (1943) or A Matter of Life and Death/Stairway to Heaven (1946). It shows that even when Hayao Miyazaki is making an overtly comic adventure film like this, he cannot help but reach for the breathtakingly epic transcendence that makes his films so exquisite.