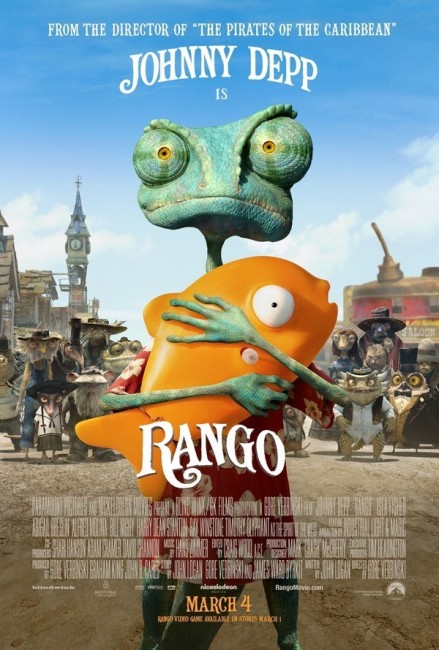 A pet lizard with ambitions of being an actor is being transported through the middle of the Mojave Desert in the back of its owners’ car. When the car skids on the road, it is freed after its glass cage is thrown out the back and shattered. An armadillo that has been run over gives the lizard directions to seek the nearby town of Dirt. The lizard duly ends up in Dirt, which is suffering from a massive drought and water shortage. In the town saloon, the lizard claims its name is Rango and makes up great stories of its bravery. He is challenged to a gunfight, although this is disrupted by the arrival of a hawk that sends all the other animals scurrying for cover, only for Rango to end up killing the hawk by accident. He is acclaimed a hero and appointed the town sheriff. However, moles break into the bank and steal all of the town’s remaining water. Rango creates a posse to track down the moles and get the water back. However, all is not as it seems as Rango discovers that behind everything is the mayor’s ruthless schemes to control the town’s water supplies.

Animation is big business in the 00s. One of the peculiar fads we have seen is the crossing over of animation directors (Andrew Adamson, Rob Minkoff, Brad Bird, Simon Wells) into live-action, while the advent of performance-capture animation in particular has allowed live-action directors (Robert Zemeckis, Steven Spielberg, Zack Snyder, George Miller, Rob Zombie, Richard Linklater) to branch out into animation.

For Rango, Gore Verbinski persuaded Industrial Light and Magic, one of the premiere visual effects companies in the world, to expand beyond their normal operations and work as an animation studio. Almost all of the personnel on Rango had never had any experience working on an animated film before. George Lucas himself so liked the idea that he employed ILM as an animation studio for the subsequent Strange Magic (2015).

Gore Verbinski is a director who works in the commercial mainstream, although his films can swing between massive hits and odd misfires. Unlike many other commercial directors, Verbinski rarely ever seems to brand his own individual style on a film. Put his films alongside and you would never know they come from the same director. That said, Rango emerges as Gore Verbinski’s best film yet. It is hard to know if what you see is Verbinski’s own individual imprint – the nearest you could point to in any of his other films is that it shares some of the eccentric visual humour that we see play out in the Pirates of the Caribbean films. Nevertheless, Rango is perhaps the first of Verbinski’s films that hits the box-office with all barrels blazing and feels like it is something that he has determined to make his own way because he wanted to. (One can also only commend Gore Verbinski for refusing studio requests to have Rango post-converted to 3D as almost any animated film hitting theatres at the moment ubiquitously is).

Here Logan and Verbinski have conceived Rango in the same way that Jim Henson did with The Muppet Show (1977-81), on one level a light talking animal comedy for kids, on another making constant reference to cinematic history with slyly aware jokes that only the adults are going to get. The plot is steeped in Western homages and familiar plot devices – the braggart who ends up thrust into the role of a sheriff – where Johnny Depp claims he modelled his character on Don Rickles in The Shakiest Gun in the West (1968); the evil landowner controlling the supplies of water – in a plot the filmmakers acknowledge is borrowed from Chinatown (1974); the plucky girl determined to defend the ranch she inherited from her father from evildoers pressuring her to surrender it; the inscrutable Indian tracker and so on. (The only complaint about the Chinatown borrowing is that one reaches the end of the film unclear what the evil mayor was attempting to do in hoarding all the water – something to do with building a city in the desert). Visually, the film borrows much from the Sergio Leone Western – the cliche shots with the camera framed between gunfighters’ legs as they showdown, the desolate town with the bottles twirling in the breeze.

The film becomes even funnier when Rango encounters the Spirit of the West and it proves to be no more than a facsimile of Clint Eastwood (replete with a golf cart of Oscars) – with Timothy Olpyhant doing such a perfect replication of Eastwood’s flinty tones that one thought the filmmakers had obtained a cameo from the man himself until the end credits showed otherwise. There is also a cute in-joke earlier in the piece where Rango attempts to cross the road and is swept onto the windscreen of a lookalike of Raoul Duke’s convertible from Johnny Depp’s cult hit Fear and Loathing in Las Vegas (1998) – indeed there are distinct times that Rango gives the impression of being an animated film that has inhaled more than a few bongs from Hunter S. Thompson’s trunkful of hallucinogenics.

Gore Verbinski and Industrial Light and Magic produce something that is quite unlike any other animated film. Here Rango gets full marks for carving out its own unique cinematic language. British cinematographer Roger Deakins has been brought in to help the animators replicate a high-contrast style that duplicates the arid desert conditions of Sergio Leone Westerns. The animation is of a quality that is frequently stunning – some of the most beautiful scenes occur during the journey that Rango makes as he leaves the town, forlornly trekking through the dunes and across the highway avoiding being missed by all the passing traffic.

The range of creatures is fashioned with a hyper-realism that takes them far away from the anthropomorphically rounded cuteness of the characters we get in Disney and Pixar. Imagine instead a line-up of characters that look like a cross between the Wild Things out of Maurice Sendak’s Where the Wild Things Are (1963) and the filthy, bedraggled denizens of tv’s Deadwood (2004-6). The characters, especially in earlier scenes where Rango enters the saloon, have such a sense of texture and detail that they become almost sinisterly threatening – like some nightmare version of An American Tail: Fievel Goes West (1991).

The story and characters work extremely well. Indeed, Rango is often a film that is more enjoyable through adults eyes than it is as an animated children’s movie. Gore Verbinski delivers everything up with a wackily eccentric sense of humour – a Greek chorus that consist of an owl mariachi troupe who address the camera directly to give us updates on Rango’s fate; the Alfred Molina voiced armadillo that has been run over and speaks of the journey to get across the road in terms of a spiritual quest.

Verbinski’s dramatic set-ups are immensely exciting and there are some wonderful action set-pieces during Rango’s chase through the desert early in the piece or his confrontation with the hawk. The film’s dramatic highlight, a sequence where Gore Verbinski’s eccentric humour and dramatic excitement are in perfect tandem, is the chase sequence fleeing with the water cooler aboard a covered wagon while the moles fly in pursuit on the backs of bats while shooting and tossing sticks of dynamite, which is scored with Wagner’s Ride of the Valkyries (1851) in clear homage to Apocalypse Now (1979). It is a sequence that holds some of the vertiginous exhilaration of Industrial Light and Magic’s work on the very film where they were founded – Star Wars (1977).