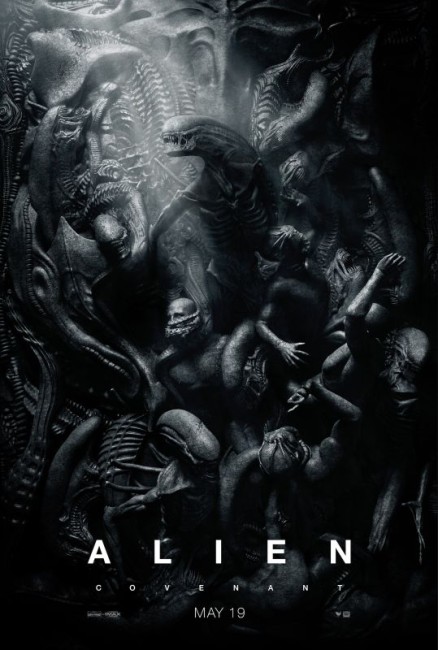 The year 2104. The spaceship Covenant is bound for the planet Origae-6, carrying a complement of embryos and colonists in suspended animation when it is struck by a neutrino storm from a passing star. The captain is killed in the midst of this and the second-in-command Christopher Oram takes charge. During the repair, a distress call is picked up from a nearby planet. When Oram sees that the planet can support life, he begins to think they should abandon the trip of several years ahead that still faces them and settle there. They land to explore the planet’s surface but two of the crew become infected by spores, causing an embryonic alien to erupt out of one crewmember’s back. The shuttle is destroyed in the fight with the creature. Stranded and with the Covenant unable to land because of an ion storm, the others are aided by the android David who grants them shelter back at an alien city. As the others deal with the alien menace that is rampant on the planet, they realise that David genetically engineered the creatures.

Alien (1979) is an undisputed genre classic. It is one of the two to three most copied science-fiction films of all time. It launched or popularised the careers of almost everybody involved with it, including Sigourney Weaver in her film debut, writer Dan O’Bannon, artist H.R. Giger and especially director Ridley Scott. The idea of sleek black creatures pursuing people through darkened corridors and the dirty industrial spaceship look has become so prevalent that it is now a cliche. Alien spawned a line of sequels beginning with James Cameron’s Aliens (1986), which is one of the few sequels that equals its predecessor in success and acclaim (with many preferring it to the original). This was followed by David Fincher’s Alien3 (1992) and Alien: Resurrection (1997), before the series started to collapse into shabbiness after being crossed over with the Predator series in AVP: Alien vs Predator (2004) and AVPR: Aliens vs Predator Requiem (2007).

After watching his creation become a major cinematic franchise, spawning several different series of novels and comic-books, not to mention kitset models and videogames, Ridley Scott made the decision to return to the franchise after 33 years with the prequel Prometheus (2012). Over the years, he had been rumoured to be involved and to even take up the director’s chair of various of the sequels but these failed to ever amount to anything. Prometheus was heralded with great anticipation by fans who then felt an equally great disappointment after seeing the film. By and large, people were not happy with Scott for having dispensed with the xenomorphs and far less interestingly concerning himself with The Engineers and what happened before. Seemingly undeterred by criticism, Ridley Scott has proceeded to make another prequel here and has boasted that he could keep on making another six of them.

Certainly, Scott has heeded the fanbase enough to give them what they want – more of the aliens. However, while Alien: Covenant is being seen as a general improvement on Prometheus by the fanbase, I must admit to disappointment in it. It feels like the creator of a work perhaps in his desire to do something different has simply failed to understand the ingredients that made his original entry into the field a classic. If either Prometheus or Alien: Covenant came out back in 1979, one strongly doubts that we would be having a series of sequels that still hold box-office draw four decades later.

During the early sections of the film, Scott seems to be fairly closely following the path laid down in Alien – the crew of a deep space ship woken from suspended animation and encountering a distress call from a planet; their landing and exploring the wreck of the Engineer ship; their becoming infected with alien embryos that emerge and slaughter the crew. Scott spends his time detailing the look of and crew at work aboard the Covenant and our expectation is that we are going to get another shipboard hunt for the aliens (although this never happens). This first half seems to be welcomely heading in the direction of what we expect from an Alien film. These scenes contain some good creature effects, in particular one wonderfully gory scene where an embryonic alien tears its way out of Benjamin Rigby’s back and turns the sickbay into a bloodbath.

However, the second half goes off in a different direction altogether. We are introduced to a second Michael Fassbender – a smart choice in that Fassbender gave the best performance in Prometheus – and it is revealed he has been genetically tinkering with the alien embryos. The drawback of this section is that it considerably waters down what the Alien franchise is all about. All of the Alien films up until Prometheus have been about sleek black aliens hunting humans – some of the films more effective at doing so than others. Alien: Covenant starts in that direction but then abruptly doglegs off and introduces a mad Frankenstein-ian creator figure who has been tinkering with them and regards them as his children. Alien and sequels gives us a frighteningly alien creation driven to breed by relentless purpose that looked genuinely alien (at least before the look was copied by dozens of imitators); Alien: Covenant merely gives us a series of genetic mishaps.

Even less interestingly, the emphasis of the show now goes from alien creatures hunting people through darkened corridors – of which the audience has a reasonable expectation when they enter the theatre – to one madly deluded android. (Here Ridley Scott seems to be more than readily homaging his classic Blade Runner (1982) with Michael Fassbender at one point quoting Rutger Hauer’s line “That’s the spirit”). During this time, the scenes with aliens hunting crewmen in darkened corridors are supplanted by people trying to deal with the mad android and of the ship trying to conduct a high-risk landing in the middle of a storm. Which is not something that one sits down to watch an Alien film for and proves considerably less interesting.