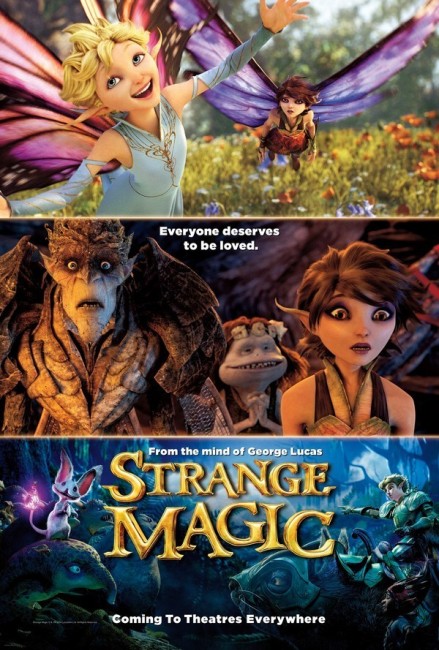 Marianne, the daughter of the Fairy King, is about to be married to Roland only to find him kissing another girl. She immediately cancels the wedding. Roland, interested only in the army he will have when he becomes prince consort, seeks to reconcile with her. He sends Sunny into the Dark Forest to find the Sugar Plum Fairy who has been imprisoned by the evil Bog King to get her to make the primrose love potion that will make Marianne fall in love with him. However, things go awry when the Bog King attacks the spring ball and abducts Marianne’s sister Dawn. During the midst of this, the potion is dropped and the Bog King is the first person that Dawn sees after inhaling it and immediately falls in love with him. It is up to Marianne to venture into the Dark Forest and rescue Dawn where she finds that the only way to free her from the spell is for it to be substituted by feelings of true love.

George Lucas will always be the man who made Star Wars (1977) and changed the face of modern fantastic cinema. Before Star Wars, Lucas had directed two other works with the fine dystopian science-fiction film THX 1138 (1971), which was a commercial flop, and American Graffiti (1973), which is less recognised today but was a huge hit when it came out. After Star Wars and at the peak of his success, Lucas abruptly announced his retirement, handing the writing and directing chores of the two sequels The Empire Strikes Back (1980) and Return of the Jedi (1983) over to others, while maintaining an executive producer role for Steven Spielberg on the huge hit of Raiders of the Lost Ark (1981) and sequels. Outside of that though and ever since the mid-1980s, the Lucasfilm empire has looked shaky with other efforts such as Howard the Duck (1986), Willow (1988), Radioland Murders (1994) and Red Tails (2012) all having flopped badly and been derided by audiences and critics. The sole exception to this might be the Jim Henson directed Labyrinth (1986), which is an excellent fantasy film, but performed poorly and was critically disdained when it came out, although has regained considerable stature since then. And then of course there was the wide fan scorn poured on Lucas’s revisiting the Star Wars universe in the prequels beginning with Star Wars Episode I: The Phantom Menace (1999) and reviving the Indiana Jones franchise with Indiana Jones and the Kingdom of the Crystal Skull (2008).

Strange Magic is being dismissed as another of Lucas’s flops. Lucas claims to have been working on the film for fifteen years and said that he wanted to create something for young girls (his daughters) in the same ways that Star Wars was for boys. The film shuffled around in a distribution limbo for some time and was eventually released as part of the deal that Lucas made with Disney to sell the copyright to the Star Wars films. Even then, the film was dumped by the studio in mid-January 2015, the traditional dead zone for cinema attendance that studios use to get rid of unwanted product, without previews where it attracted some extremely bad write-ups. The general feeling from the Star Wars fan contingent was that it only need be seen for Lucas completists.

All of which tends to suggest that Strange Magic is an extremely bad film. It’s not, it’s just average. It emerges down around the level of one of the formula animated films made by DreamWorks and Blue Sky Studios – the most comparable examples you could point to might be the likes of Rise of the Guardians (2012) and Epic (2013), the latter of which has a number of similarities in terms of look and in featuring animated fairy folk awaiting the coming of spring and battling the evil bug people.

Where Strange Magic differs from Rise of the Guardians and Epic is in a much richer quality of animation. A couple of years earlier Gore Verbinski realised that with motion-capture CGI and animation being almost identical in results but for the means by which they are conducted that Lucas’s home visual effects facility Industrial Light and Magic was now no different to an animation studio. He thus persuaded them to work as animators on his appealingly quirky Rango (2011). Strange Magic builds on that where Lucas has again used Industrial Light and Magic as an animation studio – although the results are far more formulaic and less charming than they were with Rango.

Lucas claims that Strange Magic is an adaptation of William Shakespeare’s A Midsummer Night’s Dream (c1595), although the connection is strained. Both works feature central characters that are fairies and concern themselves with the twists of fate that occur when a love potion is given to the wrong people. Resemblances however end about there. The fairies in Shakespeare are all full-size and indistinguishable from humans, nor is there any equivalent of the Bog King and the denizens of the Dark Forest. Rather the Shakespeare play concerns itself with the weavings of fate between fairy and humans following a prank that the capricious fairy King Oberon plays on his wife only for human lovers who stray into the woods to get caught in the midst. In the film, we have a more traditional battle between good and evil in which no humans feature. None of the characters in the film have the same names or any equivalent in Shakespeare, although I suppose at a stretch you could argue that the character of the African-American fairy Sunny fulfils the role of Puck.

The script for Strange Magic comes from Irene Mecchi, a Disney writer on films such as The Lion King (1994), The Hunchback of Notre Dame (1996), Hercules (1997) and Brave (2012). As such, the script falls into easily predicable patterns – the feisty independent heroine who comes in the Disney mold since the 1990s, the bumblingly idiotic comic-relief villain’s sidekicks, the pompous and self-absorbed hero. The only character that stands out is the traditional black-hearted villain who gets a mid-film twist to show that he is just misunderstood – although the subsequent romantic interest he gets seems to suddenly mean that he is redeemed and we are to just forgive all the rest of his black-hearted actions he has conducted.

The other novelty is that Strange Magic has borrowed a leaf from Moulin Rouge (2001) and other films that have followed in its wake such as Happy Feet (2006) and Rock of Ages (2012) where all the songs are revoiced versions of popular classics, somthing that is referred to as the jukebox musical. This is something that quickly turns Strange Magic into little more than a one-gimmick film. Lucas has turned direction over to Gary Rydstrom, an ILM sound mixer/designer since the 1980s who has worked on all their major films.