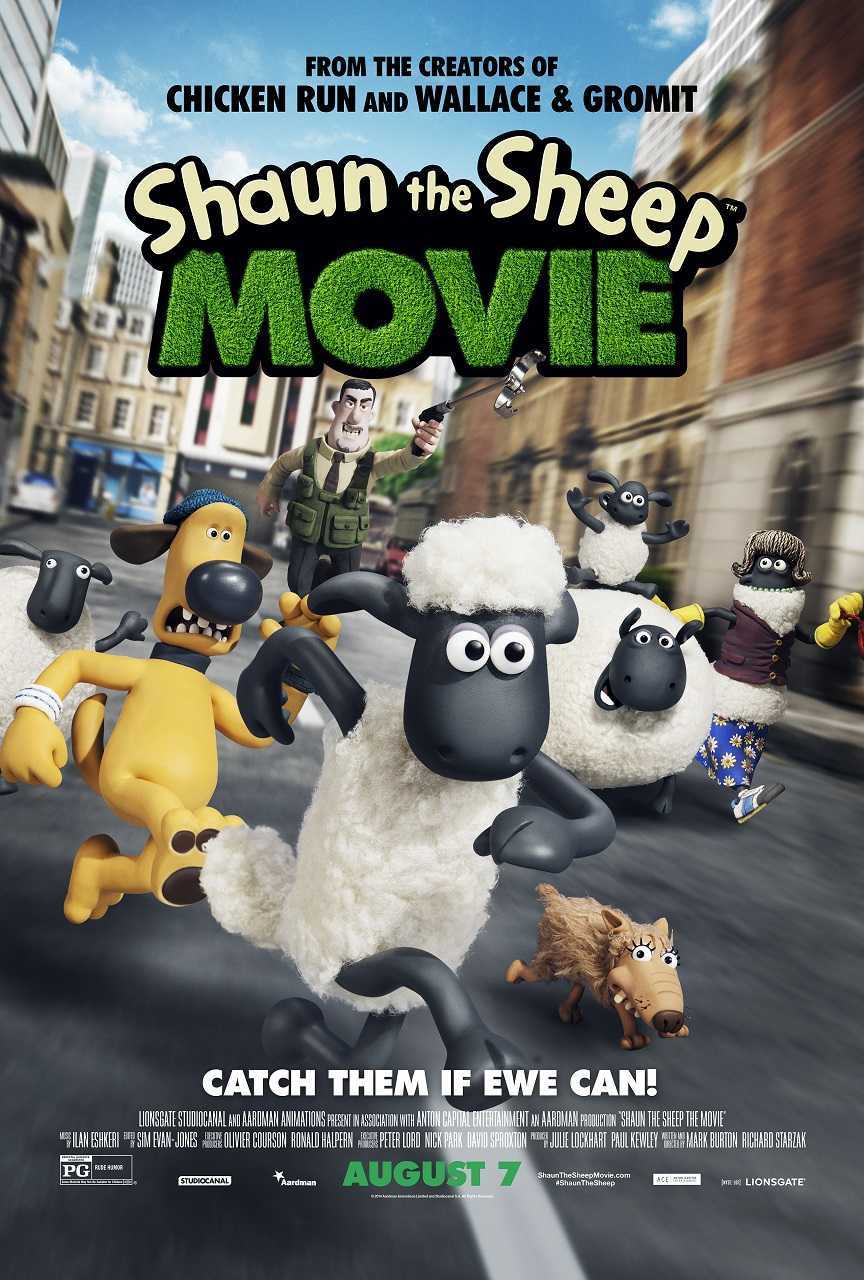 On Mossy Bottom Farm, Shaun the sheep decides that he wants a day off. He and the other sheep contrive a plan whereby they lull the farmer to sleep and then take over his house. Instead, the caravan they place the sleeping farmer in goes amok and rolls all the way into The Big City. Shaun sneaks aboard the bus into town to go and get the farmer back. He is followed by the other sheep where they are forced to adopt human disguises to avoid the officious and determined animal control officer Trumper. Meanwhile, the farmer has received a bump on the head and lost his memory. He wanders into a barber shop and picks up the shears and trims a celebrity’s hair only to be acclaimed a star hairdresser. With Shaun captured and taken to the animal shelter by Trumper, the other sheep contrive a plan to rescue him. It is then up to Shaun to think of a scheme to avoid the obsessed Trumper and jog the farmer’s memory so they can all go home again.

Formed in the 1976 by Peter Lord and David Sproxton (who were later joined by Nick Park), Aardman Animation specialises in stop-motion (usually plasticine and Claymation) animation. Aardman gained attention with the Peter Gabriel music video Sledgehammer (1986), which featured the singer transforming into a variety of forms. What gained Aardman a cult following was the Wallace and Gromit shorts, A Grand Day Out (1992), The Wrong Trousers (1993) and A Close Shave (1995), as well as the later Cracking Contraptions (2002). The Wallace and Gromit shorts are almost universally loved and have a huge appeal with audiences, both children and adults.

The success of these allowed Aardman to go onto the feature films Chicken Run (2000) and Wallace & Gromit in The Curse of the Were-Rabbit (2005). Aardman subsequently dallied in standard hand/computer-drawn animation with the likes of Flushed Away (2006) and Arthur Christmas (2011), as well as The Pirates! Band of Misfits (2012), which combined both Claymation and computer animation. With Shaun the Sheep and the subsequent Early Man (2018), they made a return to Claymation.

Shaun the Sheep first appeared as a character in the Wallace and Gromit short A Close Shave and was then given his own series Shaun the Sheep (2007– ), which has run for four seasons at various intervals adding up to 130 episodes of seven minutes apiece. Most of these centre around the antics of Shaun and the other sheep of Mossy Bottom Farm and the life they conduct oblivious to the farmer. There have been a huge number of spinoffs, including a 2008 videogame, a 2011 stage play, a series of specials for the 2012 London Olympics and a theme park that opened in Sweden in 2016.

Most of Aardman’s ventures into standard 2D animation have felt like generic animated films, while both Chicken Run and Curse of the Were-Rabbit hit the old stride but not quite and Early Man was well below their usual standards. Shaun the Sheep Movie feels like Aardman’s first 100% completely successful attempt to incarnate their eccentrically homesy and uniquely British style on the big screen. The purely visuals delights of the film – there is no dialogue whatsoever throughout – strike from the opening montage of life around the farm with the rooster crowing the sunrise into a load hailer, the dog with his morning cuppa, the sheep brushing their teeth and the spider in the barn nonchalantly chewing on a fly.

Every frame of the film bursts with visual delight and sly gags packed away – like the pan through the animal shelter, which is mocked out like a penitentiary with a dog with Bite/Bark tattooed on its knuckles, another weight-lifting with a bone, a goldfish playing harmonica and a cat in a neck cone doing Hannibal Lecter impressions, all of which we see hilariously reversed when the toughened animals try to look cute as potential adoptees come. It is the loudest I have laughed and the most fun I can say I have had in a film in some time.

Some of the most charming sequences come during the sequence where the sheep visit the city with nonsensical scenes of them rushing into a thrift store to obtain clothing to disguise themselves from the animal catcher. Quite possibly the funniest of these is where Bitzer the dog disguises himself in surgical smocks and runs through the hallway of the hospital in search of his master, having to go from all fours to walking upright when someone comes along and then entering the operating room where he is expected to operate – only to end up sidetracked by the bones of an anatomical skeleton.

This is matched by the pure slapstick silliness of the scene where the disguised sheep enter a fine dining restaurant and start eating the menu, even getting out a knife and fork or pouring salt to do so, and then start trying to imitate another diner, knocking their cutlery off in unison when he drops his knife. Or the lunacy of a sheep barbershop quartet all singing in baas.

The film climaxes on one of the demented Rude Goldberg contraption-based schemes that are a central feature of Aardman’s Wallace and Gromit films involving the sheep wheeling in a portable fence and jumping over it outside the hairdresser shop until the farmer falls asleep and a giant horse float made out of a tent and motorised on salvaged wheels used to abduct him, only for the animal catcher to get his head stuck in the horse’s ass as they make a rocket-powered getaway dragging him behind skiing on fenceboards.

Aardman made a sequel with Farmageddon (2019)