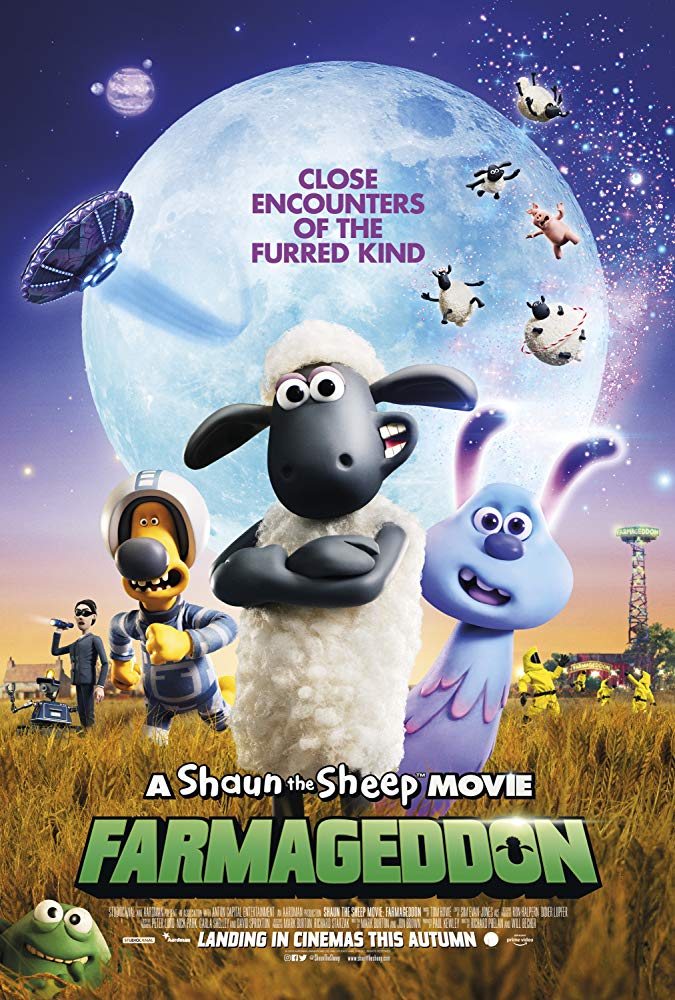 aka A Shaun the Sheep Movie: Farmageddon

A UFO lands in the woods near Mossingham and is spotted by a man walking home. This causes a local sensation. Shaun the sheep discovers Lu-La, the alien from the UFO, hiding in the barn and befriends it. Fooling around, Lu-La and Shaun crash The Farmer’s combine harvester. This inadvertently leave marks in the field and The Farmer takes these to be crop circles. He then comes up with the idea of making money based around this by building a theme park he calls Farmageddon. He sets to building this with the aid of Blitzer and the sheep. Meanwhile, Agent Red from the Ministry of Alien Detection arrives in town. Shaun and Lu-La are caught inside the UFO as her people remove it back to their base. Shaun and Lu-La try to escape and retrieve the device needed to activate the ship only to end up crashing it. As The Farmer opens Farmageddon, they try to communicate back home for Lu-La to be rescued.

UK’s Aardman Animation specialises in stop-motion (usually plasticine and Claymation) animation. Aardman gained attention with the Peter Gabriel music video Sledgehammer (1986) and then a cult following was the Wallace and Gromit shorts throughout the 1980s and 90s. The success of these allowed Aardman to expand out with the feature films Chicken Run (2000) and Wallace & Gromit in The Curse of the Were-Rabbit (2005). Aardman subsequently dallied in standard computer animation with the likes of Flushed Away (2006) and Arthur Christmas (2011), as well as The Pirates! Band of Misfits (2012), which combined both Claymation and computer animation, before making a return to Claymation with Shaun the Sheep Movie (2015) and Early Man (2018).

Shaun the Sheep first appeared as a character in the Wallace and Gromit short A Close Shave (1995) and was then given his own series Shaun the Sheep (2007– ), which has run to 130 episodes of seven minutes apiece. Most of these centre around the antics of Shaun and the other sheep of Mossy Bottom Farm and the life they conduct oblivious to the farmer. This was expanded out as by the full-length theatrically released film Shaun the Sheep Movie to which this is a follow-up. Although the IMDB insists the title of the film is A Shaun the Sheep Movie: Farmageddon, the only title that appears on screen is Farmageddon.

Farmageddon has much more of a giddy silliness than Shaun the Sheep Movie did. There are all the familiar animal antics and some enjoyable pieces of slapstick running around the farm and climbing the tower at the climax. Less clever and witty are some of the sequences piloting the UFO in orbit or escaping from M.A.D. headquarters. Unlike Shaun the Sheep, none of the sequences leave your sides splitting with uproariousness, they are amiable and enjoyable pieces of knockabout slapstick at best. It may simply be that the film has been given over to two newcomer directors – Will Becher had previously been an Aardman animator and directed some of the Shaun the Sheep shorts, while Richard Phelan had only worked as an Aardman storyboard artist.

The film comes packed with genre homages. The opening credits are a spoof on the musical communication from Close Encounters of the Third Kind (1977), plus lots of other references/jokes to that film’s musical notes and the emergence of the aliens from the ship. There’s a spoof of the use of Also Sprach Zarathustra in 2001: A Space Odyssey (1968) with a piece of popped toast replacing the monolith, while the Blue Danube sequence is quoted during the scenes in zero gravity. When the garbage bin that Shaun and Lu-La are in takes to the air, it passes a wall mural of the full moon just like the flying bicycle in E.T. – The Extra Terrestrial (1982). There’s a sonic screwdriver among Lu-La’s junk on the ship, while later the party get into Farmageddon disguised as Daleks and encounter a Tom Baker lookalike emerging from a Tardis-like porta-pottie. The Mugg-In5 robot looks like Wall-E (2008) or maybe No 5 from Short Circuit (1986). The musical code to open the secret base is the theme from The X Files (1993-2002, 2016-8). The farmer’s radio briefly plays Forever Autumn, the hit single from Jeff Wayne’s The War of the Worlds (1978). And one of the shops in town is named Milliways, the Restaurant at the End of the Universe in The Hitch-Hiker’s Guide to the Galaxy (1981).

Cute and all as the game of spot the reference is, it feels more like the efforts of a group of enthusiastic fans tipping their acknowledgement to their sources of inspiration than something as inspired as the King Kong (1933) parody in The Curse of the Were-Rabbit. Indeed, Farmageddon feels like more of a family friendly Aardman film in its pitch. It lacks the droll level of deadpan humour that is pitched at adults of a certain generation and its jokes are more slapstick, more namedrops to popular culture. Banal pop songs from Kylie Minogue and Jorja Smith appear on the soundtrack to denote emotive cues. The scenes with Lu-La, especially with those missing his parents, are played for a soft-eyed cuteness that never appears – or is taken seriously – in the other Aardman films.