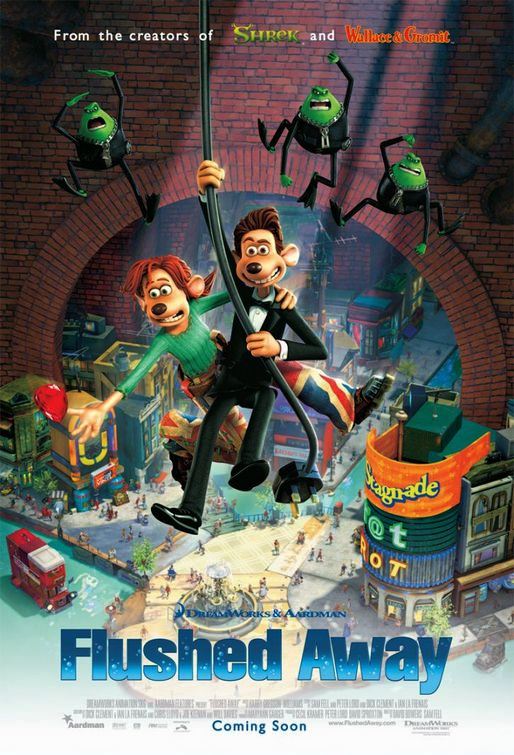 Roddy St James is a pet rat who lives in a cage in a palatial Kensington home with his human owners. They go away for a holiday and Roddy relishes the freedom of the house until a sewer rat Sid abruptly bursts out of a tap. Roddy resents the uncouth Sid who immediately takes over the house. He tries to flush Sid down the toilet but Sid turns the table and flushes Roddy down instead. Roddy finds himself in the colourful world of the sewers where rats have made a city out of scavenged junk that has been flushed away by humans. Roddy falls in with Rita, the captain of the tugboat Jammy Dodger. She is pursued by thugs of the underworld kingpin The Toad who want the precious ruby that she owns, which her father gave to her and was purportedly flushed down into the sewers by Queen Victoria. Roddy tries to get back to the topside world. He and Rita have accidentally taken a plug that The Toad desperately needs. Fleeing from The Toad’s thugs, they uncover his deadly plan to destroy the world beneath.

Flushed Away comes from Britain’s Aardman Animation, the company that specialize in stop-motion (usually plasticine) animation. Aardman are most famous for the much adored Wallace and Gromit shorts, which consist of A Grand Day Out (1992), The Wrong Trousers (1993), A Close Shave (1995), Cracking Contraptions (2002) and A Matter of Loaf and Death (2008), as well as various other works, including the Oscar-winning short Creature Comforts (1990) and later a mockumentary series where various clay animated zoo animals are interviewed, and the tv series Shaun the Sheep (2007– ). From there, Aardman went onto bigger projects like the feature films Chicken Run (2000) and Wallace & Gromit in The Curse of the Were-Rabbit (2005), as well as the subsequent Arthur Christmas (2011), The Pirates! Band of Misfits (2012), Shaun the Sheep Movie (2015), Early Man (2018) and Farmageddon (2019).

There was some controversy when Flushed Away opened where the publicity department tried to capitalise on the Aardman name and give the impression that the film had been made in the same Claymation process that all Aardman’s other films had. This is not the case – Flushed Away is a CGI animated cartoon where the closest it comes to the Aardman Claymation process is that the computer-animated characters have modelled on the look of the familiar Wallace and Gromit characters. (Aardman were purportedly once considering shooting Flushed Away in Claymation but the animation of the water would have necessitated far too much work).

This unfortunately does seem to be the problem with Flushed Away. 2006 was a year that was stocked to the gills with a glut of animated talking animals films – The Ant Bully (2006), Barnyard (2006), Happy Feet (2006), Ice Age 2 (2006), Open Season (2006), Over the Hedge (2006) and The Wild (2006). Flushed Away‘s problem is that it is not an Aardman Claymation film, it is yet another animated talking animals film entering into a market that was filled to saturation point with identical and indistinguishably similar product.

Even amid this glut of talking animals films, some of the abovementioned managed to standout with considerable charms – particularly Happy Feet. Alas, Flushed Away does not do enough to stand above the crowd, which is doubly a disappointment coming from Aardman whose other Claymation animated talking animals films are some of the most charming in recent memory.

The story has a familiar character arc – one that Disney used a number of times from Lady and the Tramp (1955) through The Aristo Cats (1970) and Oliver & Company (1988) – of the pampered domesticated upper-class pet being abruptly thrust into the wild side of life on the streets (or sewers as here) and discovering an urchin liveliness that they never knew before. Most of the characters are animation standards – the snooty hero who must learn humility, the plucky and matter-of-fact tomboy heroine, the villain and his dim-witted sidekicks. A number of scenes end up being stolen by a chorus of slugs. Flushed Away moves in a lively way and one cannot complain that the film does not maintain a level of energy and chirpiness.

While many of the familiar Aardman charms are missing from Flushed Away, the most likeable parts are those that do approximate the Aardman style. The film comes with the sly visual puns common to Aardman films. The Toad swallows a fly, it manages to escape while attached to his tongue and cry “Help, he’s a madman,” only to be swallowed again with The Toad complaining “Excuse me – my fly’s undone.” The Toad commands his thugs to take Roddy and Rita away – “Ice them” – whereupon they are dragged away to a giant refrigerator and told “Time to meet your maker – your ice-maker.” Rita’s boat has a red switch that holds a warning “Danger: Red Button”, which naturally is opened to reveal a red clothing button sewn there. A great deal of fun is also to be had in watching the background of the sewer world where everything has been scavenged from surface junk, leading to an amusingly patchwork culture using the unlikeliest of items.