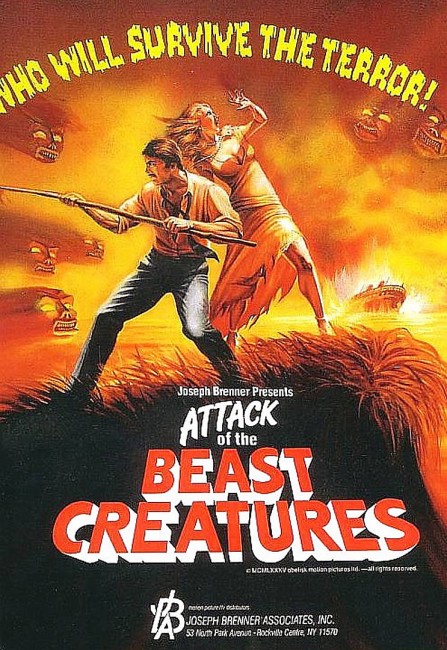 The North Atlantic, 1920. Nine survivors have escaped a shipwreck in a lifeboat. After drifting, they land on an uninhabited island. As they search for food and shelter, they come under attack by a horde of vicious miniature creatures.

Attack of the Beast Creatures is an almost completely forgotten entry from the VHS era. The film was never widely seen or distributed when it came out and only floats around these days thanks to places like YouTube where apparently nobody involved seems interested enough to DMCA it. Nobody involved ever seemed to go on to do anything else in the film industry again.

The film was shot in and around the seaside town of Fairfield, Connecticut (which doubles as the uninhabited island). Production values were clearly minimal as there are no sets built for the film – everybody just walks around in the woods for the duration. The photography is not very good and direction middling. All of the cast are unknown and give performances that tend towards the amateurish – the exception being John Vichiola who plays the perpetually contrarian businessman Morgan with a reasonable conviction.

This would merely make a dull and not very good film. However, what makes Attack of the Beast Creatures plummet down into the realm of the completely ridiculous is the introduction of the creatures. These look exactly like hordes of the Zuni fetish dolls out of Trilogy of Terror (1975) or perhaps even more so the evil doll out of Black Devil Doll from Hell (1984). They look ludicrous every time they appear and the cast gamely try to pretend to be attacked by them.

Moreover, no explanation is ever offered for what they are – the last line of the film is literally “What were those things?” The film does get in at least one admirably gory meltdown effect early on when Frans Kal splashes water from a brook on his face without realising it is acidic. Elsewhere though you can see that the denuded skeletons are actually just regular anatomical skeletons.