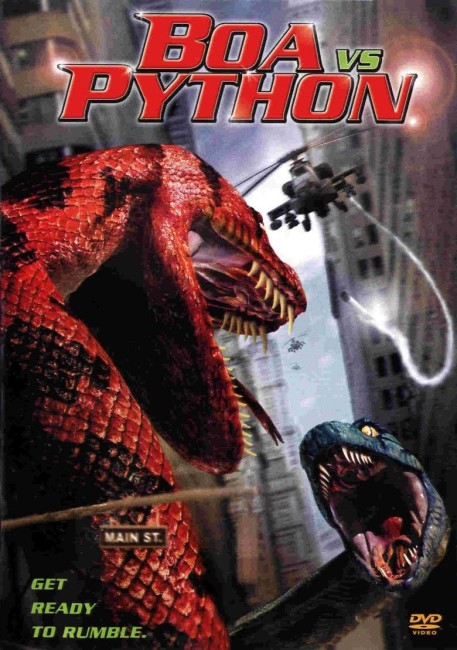 Wealthy event promoter Broddick is having a giant 100-foot long python transported so that his elite clientele can pursue it in the special hunts that he sets up. However, just outside Philadelphia, the python bursts from its container and escapes. The FBI are rushed to the scene. They recruit herpetologist Dr Emmett, with the idea of using Betty, a giant-sized boa that Emmett had bred, to track and kill the python on the theory that two snakes do not like sharing the same territory. Betty is implanted with special sensors designed by marine biologist Monica Bonds to track dolphins and is unleashed at a water treatment plant where the python is lurking. At the same time, Broddick has determined to make the best of the situation and brought in his hunters to track and kill the python.

Director Phillip [J.] Roth – best known as director of films such as Apex (1994), Digital Man (1995) and New Alcatraz (2002) – has also produced a substantial number of sf, action and monster movies usually for video, cable and tv release. Among two of Phillip Roth and partners’ previous productions were Python (2000) and Python 2 (2002). Roth’s New Alcatraz, which featured a giant prehistoric boa constrictor beneath an Antarctic prison, was renamed Boa in some places. Boa vs Python operates on the same thinking that films like Frankenstein Meets the Wolf Man (1943), King Kong Vs. Godzilla (1962), Freddy vs. Jason (2003) and AVP: Alien vs. Predator (2004) do in trying to up the ante by combining monsters, even though there is no other connection between Boa vs Python and any of the previous Python movies or New Alcatraz/Boa. The monster team-up also gave birth to The Asylum’s increasingly more ridiculous titles – Mega Shark vs Giant Octopus (2009), Mega Shark vs. Crocosaurus (2010) and Mega Python vs. Gatoroid (2011) – and others.

Boa vs Python is a film that travels into really, really bad movie stakes. Director (and former editor) David Flores turns everything into ridiculous posturing – like the scenes of Adam Kendrick tearing off his shirt to attack the snake or lighting his cigar with a flamethrower while commenting “You boys like your meat extra crispy?” One of the silliest scenes is the arrival of the hunters where each turns up in a different vehicle, which proceeds to skid, leap or land before the hunter emerges into frame to pose.

There is a ludicrous scene with Angel Boris dropping her gown, getting into the bath (in a plane!!!) and caressing herself with a sponge as all the while a snake creeps up on her – the combination of gratuitous erotica and preposterously contrived suspense in the scene is entirely laughable.

There is a good deal of gratuitous nudity throughout – pool scenes where Flores’s camera lingers on bikini-clad babes, of topless women dancing under a UV light at a nightclub and where Jamie Bergman wins an underwater breath-holding contest by whipping off her bikini and making her opponent lose his breath. (Indeed, the two lead actresses in the film are both former Playboy Playmates). It is these ridiculous poses upon David Flores’s part that push Boa vs Python into the realm of being an extremely bad film.

The dialogue is equally ludicrous:– lines like “You slithering piece of shit” or “Hello bitch, remember me?” Or the crime scene exchanges: “Maybe you should go clean up? I think you have a piece of liver on your shoe” and the detective complaining, “Do you mind putting my evidence back” after a cop slips and lands on the gored body.

The CGI effects and animatronics are without doubt on the cheap side. The film cheats on showing the snakes too – it is over 50 minutes before we even fully see them and thereafter the snakes are kept to brief glimpses and usually in a dark light or as shadows on a wall, or with men shooting off-screen at them. Like many of Philip Roth’s other films, Boa vs Python cut costs by shooting in Bulgaria.