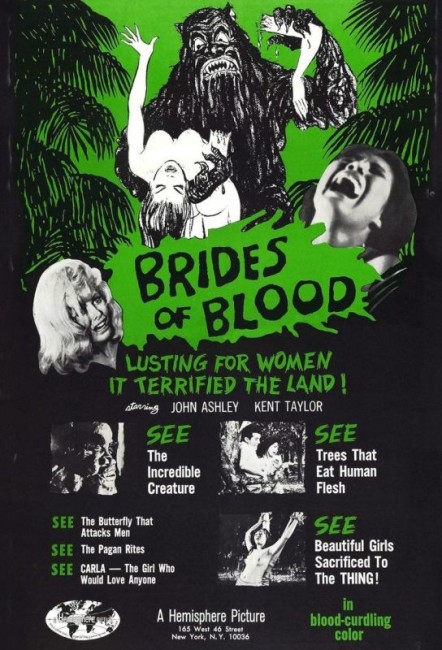 Peace Corps volunteer Jim Farrell, scientist Dr Paul Henderson and Henderson’s wife Carla arrive on Blood Island in the Philippines. They are welcomed among the natives where Jim soon forms an attachment to the local girl Alma as he helps develop their village. Henderson begins taking samples and determines that local flora and fauna has been mutated by radiation from atomic tests in the Pacific, resulting in aggressive plantlife. They also discover that the natives are sacrificing girls to appease the monster that lurks on the island. When Alma becomes one of the girls chosen, Jim sets out to stop the monster.

Brides of Blood was one of the essential items in the Filipino-made Blood Island series of the 1970s. The series consisted of four films – Brides of Blood, Mad Doctor of Blood Island (1969) and Beast of Blood (1971), as well as one American-made attempt to capitalise on the series with Brain of Blood (1971). At least, this is the internal chronology of the series according to the way in which the films were made. In US release, Mad Doctor of Blood Island came out first and was a reasonable hit thanks to a sensationalistic promotional campaign. The success of this saw the other films released as sequels in the early 1970s, even though Beast of Blood is the only one that contains any continuing characters (although at least the fictional location of Blood Island is maintained throughout the first three films, while both John Ashley and Kent Taylor appear in different roles throughout the series). In the promotional gimmick for Brides of Blood, akin to the one that boosted Mad Doctor, the US release campaign gave out free engagement rings to all unmarried women attendees.

The Blood Island films took the formula that Filipino co-directors Geraldo de Leon and Eddie Romero had created with their earlier Terror is a Man (1959), which in itself was an uncredited remake of H.G. Wells’s The Island of Dr Moreau (1896). The formula involved American visitors (usually an imported name actor and actress) arriving on a tropical island and coming up against a mad scientist who was creating monsters and hideous mutations in a jungle laboratory. There was a good deal of gore and splatter, along with much toplessness from the various actresses as they were attacked by/sacrificed to the cheesy-looking monster.

Brides of Blood was one of the earliest of the Filipino horror films and as such the formula of the series that was perfected by the subsequent films is still being discovered. Nevertheless there is a great scene about five minutes in where Beverly Hills as Kent Taylor’s blonde wife is taunted by a surly bare-chested cabin boy on the ship journey, only to then be dragged into a cabin by him, her top ripped open and she forcibly kissed, which she then starts to enjoy and respond to. This is the essence of the Blood Island films, which are like the perfect incarnations of a lurid pulp cover novel with a barely clad blonde girl being dragged away either by monsters or natives with all the mix of outrage and excitement that such an image is intended to arouse.

Brides of Blood also manages to wind in the atomic monster theme that was all the thing in genre cinema a decade earlier, although had died away by the early 1960s, with the explanation of the monster being created by radiation from atomic tests in the Pacific – although this is the only time that atomic monsters would appear in any of the Filipino horror films with all others opting for mad scientists as the raison d’etre.

Beneath the film is some appalling colonial and racial attitudes – ones that regard white people as the norm and the natives as raw and primitive in their instincts (something that clearly excites the blonde woman). The white people have a condescending attitude to the natives – John Ashley walks in with the Peace Corps perspective of the 1960s, helping them to become more ‘civilised’; Beverly Hills’ wife spends most of her time expressing distaste at life in the village and wanting her creature comforts; while elsewhere scientist Mario Montenegro is seen whipping his native dwarf servant. The natives are seen as representing a sexual openness – the aforementioned opening scene where the cabin boy forces himself on sex-starved Beverly Hills, a surprisingly sensual extended dance sequence later on, while the monster is representative of perverse sexuality with women being given to it to use and abuse. In other words, the film seems to be tapping into the motifs that lay under Terror is a Man and in particular the earlier Hollywood-made Dr Moreau adaptation The Island of Lost Souls (1932) where the island is a borderland zone that sits on the divide between civilisation and the wild. Here this divide is updated in terms of 1960s sexuality and seen a place where lusts emerge more freely and openly than they do in civilisation.

Aside from the opening scene, Brides of Blood is one of the more routine Blood Island films, lacking the lurid sensationalism that Eddie Romero and Gerardo De Leon would find with Mad Doctor. Everything about the show is sedate and slow-paced. Finally, about the 35-minute point, we get the monster and a scene where two women are tied up as sacrifices and (naturally) stripped topless. The full version of the monster when seen looks ridiculous.

Outside of the Blood Island series, producer Eddie Romero directed several other Filipino horror efforts such as Terror is a Man (1959), The Beast of the Yellow Night (1971), Beyond Atlantis (1973), The Twilight People (1972) and The Woman Hunt (1973). The amazing story of the Filipino exploitation phenomenon is told in the documentary Machete Maidens Unleashed! (2010).