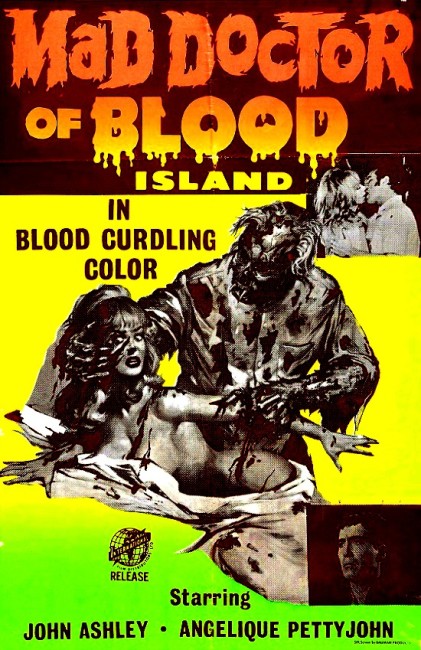 Pathologist Bill Foster accompanies his girlfriend Sheila Willard to Blood Island in the Philippines in search of her father. They find her father living in the camp of the scientist Dr Lorca where he has become a drunk. As they arrive, locals are being attacked and bloodily killed by a hideous green-skinned monster. Carlos Lopez, a local that accompanied them, realises that the monster is his own father who he was led to believe was dead. They discover how Dr Lorca injected Carlos’s father with a rare chlorophyll extract to cure his leukaemia but this instead has had the effect of mutating him into a monster.

Mad Doctor of Blood Island is one of the key films in the Filipino exploitation cinema movement of the 1970s and early 80s. Gerardo (or Gerry) De Leon and Eddie Romero had earlier made Terror is a Man (1959), an unacknowledged copy of H.G. Wells’ novel The Island of Dr Moreau (1896). De Leon and Romero went on to make a series of war movies that gained little attention before Terror is a Man was discovered and brought up by Sam Sherman of the US-based Hemisphere Pictures and its releasing arm Independent International. Sherman succeeded in turning this into a modest drive-in hit.

Gerry De Leon and in particular Eddie Romero promptly turned their attentions to making a string of copies of Terror is a Man with the likes of Brides of Blood (1968), Mad Doctor of Blood Island and Beast of Blood (1971). Independent International then released Mad Doctor of Blood Island with a sensationalistic promotional campaign that turned it into a hit, whereupon the other Blood Island films were pushed together as sequels, with American director Al Adamson also making the subsequent, non-Filipino Brain of Blood (1971), even though only Beast of Blood, featuring a return performance from John Ashley and the character of Dr Lorca, can be considered related (beyond all sharing the title location of the fictional Blood Island). Subsequently, Eddie Romero left Hemisphere to make other similar films with The Beast of the Yellow Night (1971), Beyond Atlantis (1973), The Twilight People (1972) and The Woman Hunt (1973).

All of the Blood Island films run to an extremely interchangeable formula – an American hero (usually played by John Ashley and accompanied by his girlfriend) arrives in the tropics and discovers a mad scientist operating in the jungle or on an island. The mad scientist has created a series of human monsters that proceed to run amok, attacking people (amid much gore), before abducting women and usually the heroine in the climactic scenes (amid much toplessness). Mad Doctor of Blood Island opens with a scene that puts the focus of these films upfront – establishing shots of the jungle, followed by a native girl bathing at a waterfall and then being attacked by a monster and pursued naked through the jungle.

Most of this is not too different, with the exception of the locations in the tropics and the greater gore and sexual content, from the formula that served most mad scientist films of the 1930s and 40s, or for that matter The Island of Dr Moreau, or perhaps more so its first film version The Island of Lost Souls (1932). The Blood Island films make interesting contrast to The Island of Lost Souls, which bought into a symbolic divide that seemed to say that Westerners were venturing outside of civilised norms and into a world where the dividing lines between human and animal, civilised and bestial wildness was breaking down. While The Island of Lost Souls was shot studio backlot, the venture to the Philippines and the act of casting Caucasian actors in the leads and Filipino actors as everybody else amplifies this across racial and cultural lines.

Mad Doctor of Blood Island is relatively tame with respect to its exploitation elements – a few gore scenes with severed heads and spilt intestines. The monster is appropriately green skinned and looks moderately gruesome. One of Romero and De Leon’s oddest effects is the use of a lens that frenetically zooms in and out with a vibrating effect every time the monster appears or we see from its’ point-of-view. Directorially, this is surely the equivalent of adding a whole bunch of exclamation marks at the end of a sentence for effect!!!!!! In terms of direction, creating suspense, directing action or anything at all, De Leon and Romero are utterly pedestrian. Indeed, aside from the scenes when the monster turns up, Mad Doctor of Blood Island is surprisingly sedate and slow moving.

Mad Doctor of Blood Island does come with a highly amusing William Castle-like promotional gimmick where audiences were issued with ‘green blood’ before the film began and then an intro was tacked onto the film where people were directed to drink the blood to protect them against being turned into monsters.

The fascinating story behind the making of Mad Doctor of Blood Island and of the Filipino exploitation phenomenon is covered in the documentary Machete Maidens Unleashed! (2010).