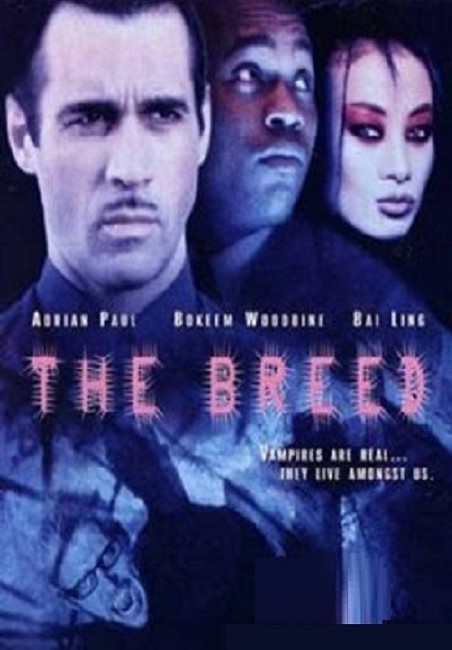 In the near future. While grieving over the recent murder of his partner, police detective Steven Grant is informed by his superiors of the existence of vampires. The vampires, who number only 4000 worldwide, have recently taken it upon themselves to announce their actuality to humanity. It is believed that a rogue member of the usually peaceful vampires killed Grant’s partner. Grant is paired up with vampire detective Aaron Gray to find the killer. However, as Grant and Gray follow the trail into the vampire underworld, it becomes increasingly apparent that the answers lie with a faction of the vampires who do not want their existence to be known by the world.

Out of the enormous number of vampire films to emerge in the 1980s and beyond, The Breed stands as one of the more interesting and unusual. Rather than concentrate on stories of undead seduction/romance, gangs of badass vampire prowling the modern world for food or melancholy immortals searching for meaning – all of which have been worked to cliche in the last decade – The Breed posits a challengingly audacious scenario, that of a secret society of vampires who are admitting their presence to the modern world for the first time and are being rent by internal political strife in the course of doing so.

The police procedural plot that drives the film suggests something of tv’s vampire cop show Forever Knight (1992-6), although the grander backdrop of the coming together of two different species makes The Breed come closer to being almost a vampire version of Alien Nation (1988). The premise of the relationship between vampires revealing their presence to the world and the adjustment between the two species was later explored with even greater challenge in tv’s True Blood (2008-14).

Intriguingly, The Breed is set itself in a faded retro-future, one where the dated vehicles and costumes recall something of the backward-looking futures of Nineteen Eighty-Four (1984) or Brazil (1985) – or even more closely the virtual noir retro-world of Dark City (1998) and in particular the later vampire alternate world film Perfect Creature (2006). It is only ever implied that the film is taking place in the future – it could just as easily be an alternate world. It is a world that looks like a perpetual vision of the USSR (in fact, The Breed was shot in Budapest). The faded buildings and old vehicles contrast with the images of a sinister police state and background signs that offer intriguingly sinister messages such as “Informing on Your Enemy Makes Them Your Friend.” The background is never explained or dwelt on any more than that but the effect is interesting.

Where the vision falters slightly is when The Breed falls into the postmodern need of films to make perpetual in-reference to the genre they drawing themselves from. Thus we get numerous reference to other vampire movies and characters named John Seward, Lucy Westenra, Elizabeth Bathory, Graf Orlock (the vampire in Nosferatu [1922]) and Barbara Steele (after the actress who appeared in numerous 1960s Italian horror films, most notably Black Sunday [1960]). The genre in-referencing is gimmicky and it distracts from the suspension of disbelief. The Breed is a film strong enough to be carried by its story and this in-referencing only pulls back and remind us we are watching a movie. Director Michael Oblowitz also throws in some cliche flying action scenes, which are not particularly well accomplished.

The Breed also features the exotically beautiful presence of Chinese-born actress Bai Ling, memorable as the seer in The Crow (1994) and most hilarious in the Hong Kong horror Dumplings (2004). Decked out in piercing contact lenses and a series of wildly exotic costumes here, she exudes a genuinely unearthly presence.

Director Michael Oblowitz has gone onto make a number of other B-budget action films and thrillers. He ventured back into the genre was the killer shark film Hammerhead (2005), The Traveler (2010) about an enigmatic stranger and the ESP film The Ganzfeld Experiment (2013).