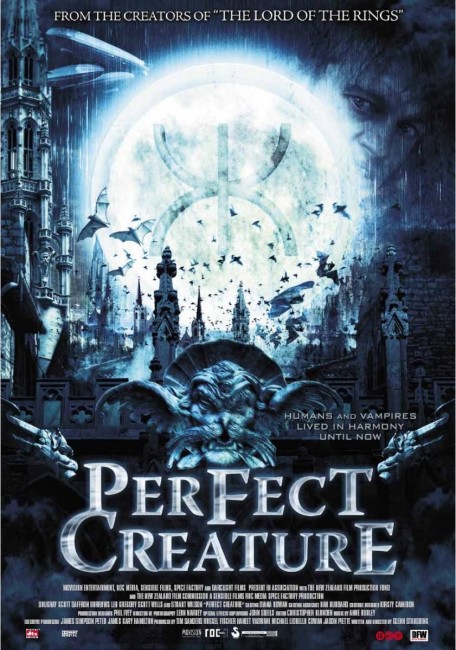 In an alternate world, vampires live alongside humans. They have created the church known as The Brotherhood where they conduct their own business separate from human affairs. The vampire Silus is tracking a vampire who is killing in the human slums of Jamestown. The human police become involved after the latest victim is killed. Silus goes to liase with the lead detective Lilly. He tells the police that the killer is his brother Edgar who is conducting the killings as a personal vendetta against him. Edgar has left notice of where he will attack next. Silus arranges a police trap and Edgar is captured, not before he sinks his teeth into Lilly. Silus watches over Lilly as she is saved by doctors. Edgar has been engaged in genetic experiments, which are forbidden by The Brotherhood, where he has been trying to breed a female vampire but has become infected by madness as a result of his experiments. He now escapes custody and abducts Lilly. There Edgar sets out to infect all humans with his blood, creating a plague of madness and death in Jamestown.

New Zealand director Glenn Standring made his directorial debut with The Irrefutable Truth About Demons (2000), which conducted a fair trip through the cliches of the occult film and enjoyed reasonable success in international release. Perfect Creature was Glenn Standring’s follow-up. Standring has a much better budget than he did with The Irrefutable Truth About Demons and the backing of an American distributor (20th Century Fox), as well as enough money on hand to import a handful of at least B-list international stars – Dougray Scott, Saffron Burrows, Stuart Wilson. After being in the pipeline for several years, Perfect Creature finally enjoyed a cinematic release in New Zealand in 2007. Standring has not directed any films since but has has acted as screenwriter/producer for Toa Fraser on The Dead Lands (2014) and 6 Days (2017), both non-genre.

What strikes one about Perfect Creature is the scale of Glenn Standring’s conceptual ambition. He imagines an alternate timeline where vampires live alongside humans and of a New Zealand (although the location is never mentioned as such up on screen, you draw the inference that it is from the number of Maori that are integrated into the background) that is a peculiarly ahistoric mix of a Dickensian fantasy of Victorian streetlife and the faded working class decor of Wartime England. The props have a unique handcrafted look – from the adapted Luger pistols to the steam cars, black-and-white tv sets built like archaic radiograms, to the what has now become the cliche image of dirigibles drifting through the skies. There are some fascinating glimpses of a world where humanity and vampire live alongside as two separate species – like a conversation between Dougray Scott and Stuart Wilson where they are served up little espresso cups of blood on a tray by a waitress while in the background we see a girl happily having her blood drained.

While it has enjoyed great success on the printed page, the alternate history genre is a muchly debased one on film – think of the dire tv series Sliders (1995-2000) – and is deservous of a decent filmic treatment. Perfect Creature does somewhat, although is not strictly an alternate history as there is no explanation of the historical divergence with our timeline. Perfect Creature dithered around in release limbo since 2005 and one gets the impression that it was considerably re-edited during this time. One suspects that some of the explanation about the background of the alternate world has been trimmed as the publicity machine refers to details that are not present in the film – that we are in a New Zealand that has been renamed Nuovo Zealand and that the year is 1969 (neither of which is stated on screen).

Perfect Creature has undeniable similarities to The Breed (2001), which also concerned itself with the relationship between a human detective who was paired up with a vampire, featured the backdrop of internecine vampire politics and also appeared to be set in an alternate world. That said, neither of these is as unique a vampire alternate history as Kim Newman’s various Anno Dracula books wherein he imagines a vast vampiric alternate history of the 19th-20th Centuries that results from Count Dracula marrying Queen Victoria, during the course of which Newman manages to winds in every imaginable character from history, popular fictional and film. The subsequent tv series True Blood (2008-14) did a much more imaginative job of portraying a (contemporary) world where vampires and humanity co-exist.

Perfect Creature sits atop a bunch of modern vampire films (post-1998) that draw considerable influence from the graphic novel and more than a smidgen from The Wachowski Brothers – see the likes of Blade (1998), Vampires (1998), Dracula 2000 (2000), Underworld (2003), Night Watch (2004), Vampires: The Turning (2005) and Ultraviolet (2006) and sequels to most of these. In these, the emphasis is not so much on classic images of the vampire rending apart decent society or acting as a metaphor of sexual repression but a series of action movie and Gothique poses and stories that feature wars between vampire factions or the relationship between humanity and vampire-kind, which is usually inimical.

The great disappointment about Perfect Creature is that most of the story could have been put together from shuffling around a series of plot cards assembled from these films – vampires interwound with or behind the curtain of human history; rivalry across the ages between two clans/siblings/lovers; genetic engineering to cure vampire-kind. Dougray Scott does not too bad a job of managing to look dark and brooding – it is a performance that Scott almost entirely manages to give simply with his presence and by keeping his words to a tightly controlled minimum.

However, once Leo Gregory escapes, Perfect Creature heads in predictable areas – his abduction of Saffron Burrows, the plague and quarantine, her attempts to escape, a perfunctory showdown and confrontation between the two brothers. None of this is impelled in a terribly exciting or original way. Indeed, the great disappointment of these scenes is that most of them could have taken place without the need for the alternate world setting.

The design scheme for the alternate world has been conducted on a medium budget, which seems to make the film cramped – the slum scenes, for instance, never seem to move beyond two or three alleyways. Perfect Creature is a film that seems perpetually on the edge of opening up into something more, either in terms of the action element or the Gothique stylism of something like Underworld, but where Glenn Standring seems to lack the budget to do so.

The characters feel severely underdeveloped – there is not much given over to Leo Gregory and explaining why he is killing people or wants to infect the world with his blood. The relationship between Dougray Scott and Saffron Burrows is one that could have provided the film an enormous amount of depth but it feels that Glenn Standring just skims over this, barely even touching the surface. Perfect Creature is a film where a little bit more of each of the elements present might have made the difference in turning it from a work that exists in terms of what it could have been to one that was a classic.