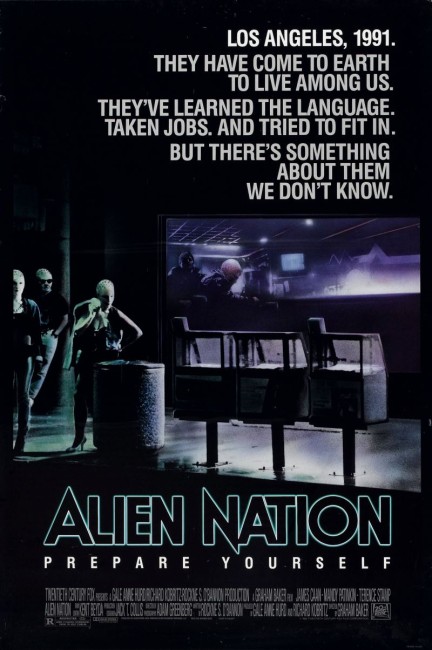 After the crash of an alien ship in the Mojave Desert in 1989, its consignment of slaves, the humanoid Tenktonese, or Newcomers as they become known, have been freed and assimilated into American culture. When police detective Matt Sykes’s partner is killed during a Newcomer robbery, Sykes volunteers to partner up with Sam ‘George’ Francisco, the first Newcomer detective on the force, in an attempt to find the killer. Together they uncover a plot to sell a drug that has deadly addictive effects on the Newcomers.

The idea of aliens as just another ethnic minority group in the great American cultural melting pot is an amusing idea. It is perhaps the logical extension of the wave of warm fuzzy alien visitor films that began with Steven Spielberg’s E.T. – The Extra Terrestrial (1982). The opening moments of Alien Nation with a tv sequence showing the crashing of the Newcomer ship; comments seemingly by ‘then-President’ Ronald Reagan; followed by a cruise through a Newcomer ghetto where familiar culture is effectively inverted showing Newcomer drugstores, porn cinemas, MacDonalds restaurants and Pepsi billboards, creates a wonderfully credible milieu for the story.

In practice however, the concept pans out to a disappointingly ordinary buddy cop drama, no more than a novelty variation on In the Heat of the Night (1967). Although if anything, Alien Nation has been construed more as a novelty variation on the then recent runaway success of Lethal Weapon (1987). The cop show element, notably a climax involving car chases and the seeming need to have to throw in a mutant monster, is tiresome.

The plus side of the film and the aspect that does make it work are the characters. James Caan, doing some very good acting, is marvellous as the grudgingly good-hearted bigot Sykes. He has some especially good moments trying to explain a human joke to straight-man Mandy Patinkin. Patinkin plays with a Mr Spock-like fall guy deadpan. One scene with he telling of how Newcomers treasure what humanity takes for granted points at much unfulfilled promise. There is also a commendably spaced-out role from Leslie Bevis as a kinky Newcomer dancer.

The film also fuelled a short-lived tv series Alien Nation (1989-90), which lasted for 21 episodes. This regrettably befell the creative kiss of death of Kenneth Johnson – the producer responsible for tv series like The Bionic Woman (1976-8), The Incredible Hulk (1977-81), V (1983) and director of films such as Short Circuit 2 (1988) and Steel (1997). Johnson pushed the slimness of the film’s initial concept over into the ludicrous – like the images of Newcomer eroticism involving humming and back-licking. James Caan and Mandy Patinkin’s replacements in Gary Graham and Eric Pierpoint lacked in any of the screen magic that the characters had here. The series only lasted one season, although Johnson revived it for five insipid tv movies – Alien Nation: Dark Horizon (1994), Alien Nation: Body and Soul (1995), Alien Nation: The Enemy Within (1996), Alien Nation: Millennium (1996) and Alien Nation: The Udara Legacy (1997).

Screenwriter Rockne S. O’Bannon has had a number of genre associations. O’Bannon initially began writing for tv series such as The Twilight Zone (1985-9) and Amazing Stories (1985-7). O’Bannon made his feature debut with Alien Nation and went onto direct the fine psychic thriller Fear (1990), as well as created the tv series seaQuest DSV (1993-6), Farscape (1998-2003), Cult (2013), Defiance (2013-5) and Constantine (2014-5). O’Bannon has also directed and written the tv movie Deadly Invasion: The Killer Bee Nightmare (1995), written the alien invasion mini-series Invasion (1997), written and produced the Peter Benchley mini-series Creature (1998), written the tv movie Fatal Error (1999), which has the absurd premise of a computer virus that becomes a biological virus, and wrote/produced the mini-series The Triangle (2005) about alien abductees.

Director Graham Baker has also made a number of genre films, including the third Omen film The Final Conflict (1980), the interesting Impulse (1984) about a smalltown being driven insane by a biospill, and Beowulf (1999), an adaptation of the epic legend.