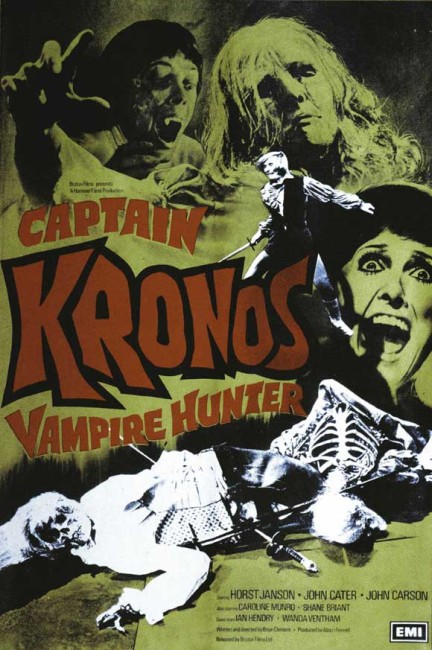 The master swordsman Captain Kronos and the hunchbacked Professor Hieronymous Grost are professional vampire hunters. At the invitation of their old friend Dr Marcus, they travel to the village of Durward to investigate a series of vampire killings. However, Marcus becomes infected by a vampire’s bite and they are forced to kill him. The source of the killings eventually leads them to the aging Lady Durward in her mansion overlooking the village.

This Hammer film was the directorial debut (indeed the only film as director) of screenwriter Brian Clemens. Brian Clemens is an interesting figure within the British television industry. Clemens first became known for his scripts for The Avengers (1962-9) then went onto produce the underrated The New Avengers (1976-8) and create the great The Professionals (1977-83) and the techno-thriller series Bugs (1995-8). He had also contributed screenplays to numerous genre films such as the original And Soon the Darkness (1970), Hammer’s Dr Jekyll and Sister Hyde (1971), The Golden Voyage of Sinbad (1973) and, ahem, Highlander II: The Quickening (1991).

Captain Kronos, Vampire Hunter an interesting effort despite the fact it doesn’t fully make work. It was made at a period when Hammer had milked the vein of its Dracula sequels dry and was starting to experiment with the vampire film – updating Dracula to the present – Dracula A.D. 1972 (1972) and The Satanic Rites of Dracula (1973); combining Dracula with the kung fu film – The Legend of the 7 Golden Vampires (1974); creating the likes of its lesbian sex vampire Karnstein trilogy beginning with The Vampire Lovers (1970); as well as other interesting entries like Vampire Circus (1972).

With Captain Kronos, Vampire Hunter, Brian Clemens ingeniously combines the Hammer vampire film with the Errol Flynn-type swashbuckler. It is a unique and original idea – indeed, one that Hammer had hoped to spin out into a series. Clemens fills the film with striking images, such as the hero going into battle with a sword smelted out of a crucifix and a mirrored visor to reflect the vampire’s hypnotic gaze. Some of Clemens’s vampire mythology adds a sense of old wives tales and folk mythology to classical lore with intriguing results. There is a fine scene where the two heroes find their friend has become infected and attempt various methods, including hanging, burning and impalement, to kill him.

Clemens’s direction is often uneven in places – some scenes work well, but others such as the fight in the graveyard and several of the vampire attacks remain strangely stodgy. Horst Janson makes for wooden hero. Overall, the attempt fails to fully take off. If Clemens had been able to take full flight as an action director, Captain Kronos, Vampire Hunter would have been a classic. Even so, Captain Kronos, Vampire Hunter remains one of the most fascinating efforts to emerge from the latter days of the Hammer cycle. If nothing else, it is the film that started off the vampire action genre of the 00s.