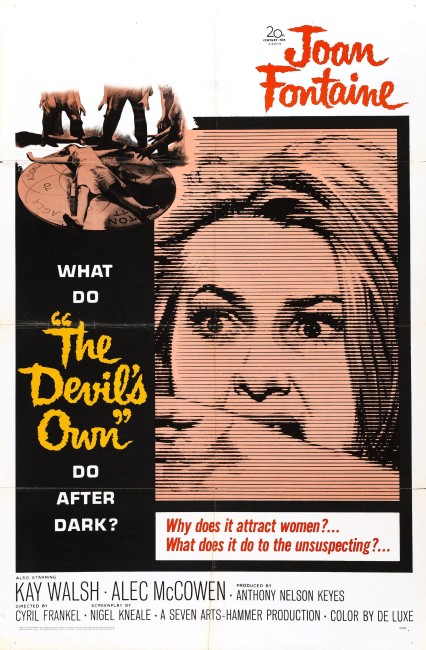 aka The Devil’s Own

Recovering from a nervous breakdown after being attacked during a native uprising at a mission school in Africa, Gwen Mayfield accepts a job as teacher in the sleepy English country village of Heddaby. She finds strange things happening around the village. Two of her pupils, teenagers Linda Rigg and Ronnie Dowsett, are attracted to one another but everybody seeks to keep them apart. Ronnie then has a mysterious accident and Gwen afterwards finds a voodoo doll with pins poked into it. Her insistence on trying to dig into what is happening uncovers evidence that Ronnie’s accident and other deaths may be being caused by witchcraft.

The Witches, known as The Devil’s Own in the US – and not to be confused with the better known Nicolas Roeg-Roald Dahl adaptation The Witches (1990) – was one of the mid-period Hammer films. It is one of the usually overlooked Hammer films, featuring neither Christopher Lee, Peter Cushing, nor any of Hammer’s other regular directors and stars.

Director Cyril Frankel made one other film for Hammer with Never Take Sweets from a Stranger (1960), as well as about a dozen other quota quickies, episodes of various British tv series and a couple of other films that border on genre territory with the stalker film The Very Edge (1963) and the Edgar Wallace adaptation The Trygon Factor (1966).

The one name of interest on the credits is that of scriptwriter Nigel Kneale, best known as the creator of the Quatermass tv series’ The Quatermass Experiment (1953), Quatermass II (1955) and Quatermass and the Pit (1958-9), all of which were adapted into films by Hammer with The Quatermass Xperiment/The Creeping Unknown (1955), Quatermass 2/The Enemy from Space (1957) and Quatermass and the Pit/Five Million Years to Earth (1967). (See below for Nigel Kneale’s other genre credits). The film was adapted from the novel The Devil’s Own (1960) by Peter Curtis, a sometimes pseudonym for British historical and thriller writer Norah Lofts. American actress Joan Fontaine, an Academy Award winner/nominee/winner for films like Rebecca (1940), Suspicion (1941), The Constant Nymph (1943) and with only one other genre appearance in the film version of Voyage to the Bottom of the Sea (1961), personally brought the book to Hammer as a starring vehicle for herself.

Purportedly, Nigel Kneale was not happy with the way the film ended up on screen, although it works well enough in its own sedate way. Apparently, Kneale was more interested in sending the witches up but this was watered down in the film’s final version. There still remains that that is characteristically Nigel Kneale’s writing. Kneale was frequently interested in digging beneath popular myth and belief in the supernatural to find a rational explanation – the idea of The Devil as an alien race memory in Quatermass and the Pit, of a scientific explanation for hauntings in The Stone Tape (1972) – and we see that in the scenes here where he tries to psychologically explain the appeal of witchcraft.

The Witches was probably the first occult film to take up the theme of aging witches/Satanists seeking to reincarnate in the bodies of children. This has since appeared in a number of other films, including the likes of Brotherhood of Satan (1971), Alison’s Birthday (1979), Doctor Sleep (2002) and with more scientific regard in Nothing But the Night (1972).

The Witches was one of the occult films made before the massive boom created a few years later by Rosemary’s Baby (1968), The Exorcist (1973) and The Omen (1976). Others from this spate of earlier occult films include Night of the Demon/Curse of the Demon (1957), Night of the Eagle/Burn, Witch, Burn (1961), Witchcraft (1964), Eye of the Devil (1966), Hammer’s The Devil Rides Out (1968) and Curse of the Crimson Altar (1968). All of these were British-made films – it almost seemed as though American filmmakers were too fearful to broach matters occult prior to the success of Rosemary’s Baby.

Of course, what happened after The Exorcist was that occult cinema became all about serving shock and obscenities up to audiences. None of this exists in any of these earlier British films – The Witches does culminate in a strange orgy/ritual presided over by Kay Walsh where the townspeople sway in zombified unison and eat a mix of substances that is made to look as though they are devouring excrement, which is certainly slightly more suggestive than the tame one in Hammer’s subsequent The Devil Rides Out, but everybody still remains clothed in both films. Contrast this to the far more out there content in Hammer’s later Satanism film To the Devil a Daughter (1976).

Underneath many of the early Hammer films (before around 1969), there is a strong sense of repressed forces being stirred up and unleashed. In many of these and other works of the Anglo-horror cycle such as The Stranglers of Bombay (1959), Dr Terror’s House of Horrors (1965), The Face of Fu Manchu (1965), The Reptile (1966) and The Ghoul (1975), there is the sense that the repressed that is emerging is colonial guilt from the countries that were subdued during the period of British Empire.

This is particularly evident in the prologue of The Witches where we see a mission schoolhouse being invaded by unruly native forces who wield voodoo. The sequence ends with the utterly wild image of a giant-sized African voodoo fetish bursting into the schoolhouse. This sets up a decided atmosphere of dis-ease as the film segues to Joan Fontaine’s being hired and travelling to Heddaby, which could not be a more archetypical image of a sleepy English village. It is not hard to see the orgy that culminates the film as being the equivalent of Christopher Lee’s Dracula devouring polite British class society or the depravities against good taste being conducted by Peter Cushing’s Baron Frankenstein. In both cases, it is a chaotic and savage force erupting through the veneer of polite society. You could maybe even draw inference between Kay Walsh’s use of Roman liturgy in the climactic ritual and the English dread of Catholicism.

The Witches is also construed somewhat as a post-Lewtonian horror film – after Val Lewton, the famous producer of the 1940s who made a string of works beginning with Cat People (1942) that hovered in a delicate state of ambiguity as to whether what we were seeing was supernatural or mundane in nature and the belief merely superstitions in other people’s minds. There is undeniable similarity to Val Lewton’s The Seventh Victim (1943) about Satanists possibly at work in modern-day New York City. Some of The Witches does hover in that state between whether the witchcraft is real or merely being imagined by Joan Fontaine – the middle of the film sidetracks away for a long section where she is incarcerated at a hospital with amnesia and told that everything that has happened is due to a nervous breakdown that happened after she returned from Africa – although this is not conducted with enough of the psychological subtlety that the Lewton films held to leave one hanging in uncertainty.

The Witches is rather tame and sedate as Hammer’s films go and almost never ventures into shock territory, but Cyril Frankel delivers it with a fair hand and it works with modest effect. The film’s biggest disappointment is its ending, which offers up a wholly routine instant deus ex machina means of stopping the evil and restoring the status quo of the sleepy village.

The Witches certainly has an unusual cast. Chief among these is Martin Stephens, the seventeen year-old child actor who had made impressive appearances in earlier British genre films such as Village of the Damned (1960) and The Innocents (1961). Stephens appears a whole lot more grown up and less sinister here, but The Witches would be the last film he would ever make. Also present is Gwen Ffangcorn-Davies, a theatrical legend who was later made a dame for her work; Leonard Rossiter, who became known in the next decade for his biting comic roles in shows such as Rising Damp (1974-8) and The Fall and Rise of Reginald Perrin (1976-9), in the role of a doctor; and Michele Dotrice, the daughter of the better-known Roy Dotrice, who was a regular tv actress throughout the decades ahead, probably best known as Michael Crawford’s longsuffering wife in Some Mothers Do ‘Ave ‘Em (1973-8).

Nigel Kneale’s other film scripts were The Abominable Snowman (1957), Quatermass 2/The Enemy from Space (1957), the adaptation of H.G. Wells’s The First Men in the Moon (1964), Quatermass and the Pit (1967) and uncredited work on Halloween III: Season of the Witch (1982). Kneale’s teleplays were:– The Quatermass Experiment (1953), 1984 (1954) from the George Orwell novel, Quatermass II (1955), Quatermass and the Pit (1958-9), The Road (1963), about a haunting that may in fact be an example of time travel, The Year of the Sex Olympics (1970) about a future where the populace is pacified by televised sexual competitions, Wine of India (1970) about a future society that enforces euthanasia, The Stone Tape (1972) about the investigation of ghostly phenomena, the anthology tv series Beasts (1976), Quatermass/The Quatermass Conclusion (1979), the comedy series Kinvig (1981) about an SF fans who has an encounter with aliens, and the ghost story tv movie The Woman in Black (1989).