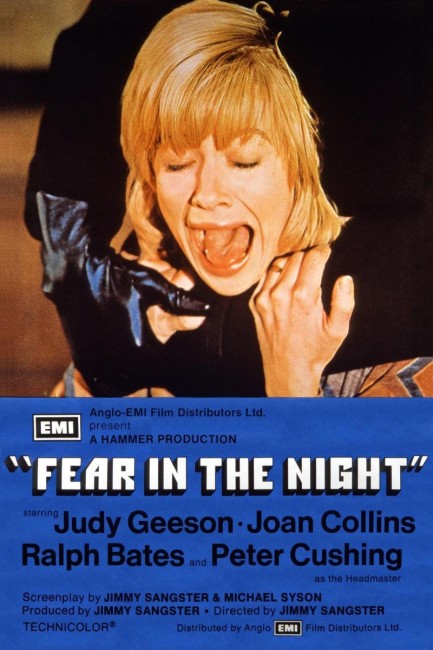 aka Dynasty of Fear

Recently having been discharged as a psychiatric patient, Peggy Heller suffers repeated attacks from a man with a wooden arm. Afterwards, her new husband Robert can find no evidence of the attacks and is convinced that Peggy is losing her sanity again. She joins him as he takes up a teaching position at a remote country boarding school. She is puzzled to find that there are no pupils there, that the noises of the classrooms are only recordings and that this has been set up as an elaborate fantasy for headmaster Michael Carmichael who has lost his mind after he caused a fire that accidentally killed many pupils ten years before. There the attacks continue – and then Peggy discovers that Carmichael has a wooden arm.

During the 1960s Hammer Films, in between their various Frankenstein and Dracula films, made a number of Psycho-Thrillers. Unlike other psycho-thrillers of the era, Hammer relied less on the Freudian sexual identity crises of Psycho (1960) and instead, with occasional exceptions, tended to draw upon the contorted confidence schemes introduced by the French classic Les Diaboliques (1955). Hammer produced a number of such psycho-thrillers – A Taste of Fear/Scream of Fear (1961), Paranoiac (1963), Maniac (1963), Nightmare (1964), Hysteria (1964), The Fanatic/Die, Die, My Darling (1965), The Nanny (1965) and Crescendo (1970).

Most of these were written by regular Hammer screenwriter Jimmy Sangster who had written the two films, The Curse of Frankenstein (1957) and Dracula/The Horror of Dracula (1958), that started the Hammer horror legacy. In the 1970s, Jimmy Sangster was finally granted the opportunity to take the director’s chair. His first two outings – The Horror of Frankenstein (1970) and Lust for a Vampire (1971) – were disastrous, two of Hammer’s worst films, but Sangster gained ground with this, his third and last ever directorial film, which was a return to more familiar psycho-thriller territory.

One can pull the coincidences in Fear in the Night apart but it does work. It works particularly from the director’s chair where Jimmy Sangster demonstrates a slick ability in telling an economically constructed film. All the twists work effectively. Sangster constructs some nice shocks – particularly good is the opening shot, a soft-focus pan across a prettily arranged tennis court with sweet choral voices in the background to arrive at a pair of legs hanging from a tree in the foreground. The attack on Judy Geeson in the bathroom where she pulls the attacker’s wooden arm off is another good shock effect, as is the shot where Peter Cushing raises his hand to help her untie her scarf, she not seeing the wooden arm behind his back. Or his pursuit of her through the school, keeping on coming with shattered glasses even after she shoots him at point-blank range.

Judy Geeson is pallid but Peter Cushing is as always good. Joan Collins, who was a rising star on the Anglo-horror scene at the time, gets her teeth into a super-bitch role with considerable relish. Following Collins’s success in the prime time soap Dynasty (1981-9), Fear in the Night was with a deft commercial chutzpah released on video as Dynasty of Fear.