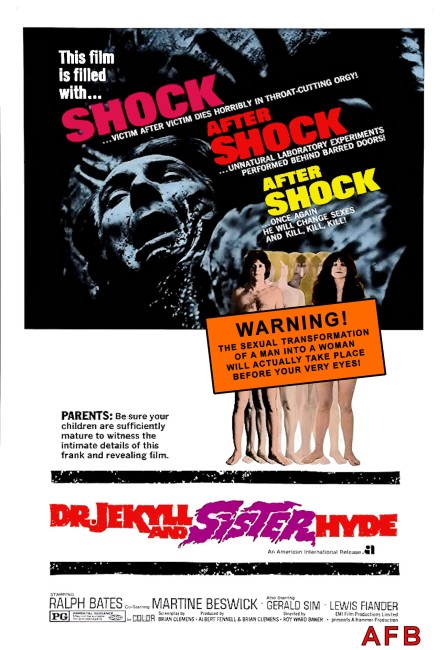 Dr Henry Jekyll is searching for a universal panacea for human ills. Haunted by the fear that one lifetime will not be enough to complete his research, he sidetracks from his objective to come up with an immortality serum. He succeeds but it has the unpredictable side effect of causing the taker to change sex and turns him into a woman whenever he takes it. To explain the sudden appearance of his female half around the house, he calls himself Mrs Hyde, saying that she is Dr Jekyll’s sister. However, Jekyll soon finds that the serum requires a regular supply of female hormones to maintain its effect, necessitating the killing of young girls. Jekyll abhors this but as she begins to take control, the Mrs Hyde half relishes the killings.

Dr Jekyll and Sister Hyde came at the time when Hammer had conducted variations on most of the horror classics – The Curse of Frankenstein (1957), Dracula/The Horror of Dracula (1958), The Mummy (1959), The Phantom of the Opera (1962) and the aforementioned Two Faces of Dr Jekyll, had sequelized most of these and then went into a second cycle where they began to conduct more openly sexual and explicit or novelty variations like updating Dracula to the present-day – Dracula A.D. 1972 (1972) or crosshatching the vampire movie with the swashbuckler – Captain Kronos, Vampire Hunter (1972) and the kung fu film The Legend of the 7 Golden Vampires (1974). (See below for Brian Clemens and Roy Ward Barker’s other genre works).

Dr Jekyll and Sister Hyde was a title that had been floated around the studio for several years before anybody came up with a film to go with it. The script was eventually developed by Brian Clemens. Brian Clemens had originally attained attention writing a number of scripts and as story editor for tv’s cult series The Avengers (1962-9) and would go onto direct Captain Kronos. The director was Roy Ward Baker, who had also worked on The Avengers and became a regular director for Hammer with the likes of Quatermass and the Pit (1967), The Vampire Lovers (1970), Scars of Dracula (1971) and The Legend of the 7 Golden Vampires.

The novelty of the idea makes for a worthwhile variation on a story that by then was starting to become worn. Brian Clemens keeps tongue perfectly in cheek, serving up all the usual “Dr Jekyll is not himself today” lines with some highly amusing sex change twists. Clemens does an adept job in the various twists and turns on gender and role confusion that he serves up. In a witty aside, he throws in cameo appearances from Burke and Hare and Jack the Ripper (even though in actuality the Burke and Hare and the Jack the Ripper killings were about seventy years apart). Roy Ward Baker holds everything together with stylish aplomb, milking the gaslight milieu for maximum atmosphere.

In the Dr Jekyll role was Michael Bates, someone that Hammer were trying to craft as their new young star with his appearance as Baron Frankenstein in The Horror of Frankenstein (1970), as well as in Taste the Blood of Dracula (1970), Lust for a Vampire (1971) and Fear in the Night (1972). In the Sister Hyde part was Martine Beswick, who had appeared in a number of Hammer films, including One Million Years B.C. (1966) and Slave Girls/Prehistoric Women (1967), as well as two James Bond films. It is amazing how well suited the two of them are together – the likeness is striking. They even look like brother and sister or gender opposites – and without any makeup required either. Both do a superb job of complementing and mimicking the other’s characteristics.