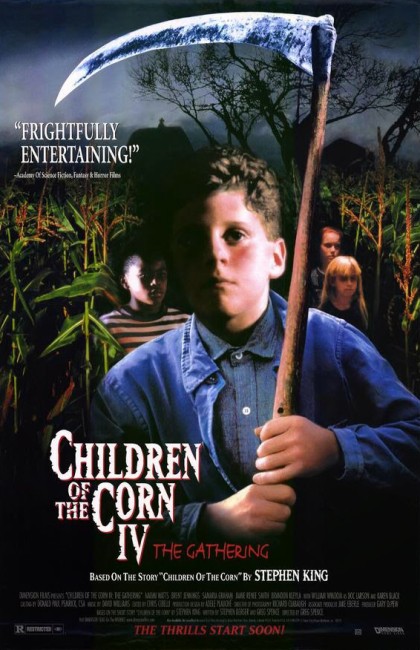 Grace Rhodes returns to her hometown of Grand Island, Nebraska to tend her ailing mother. To help pay the pills, Grace takes a job as a nurse at the community medical centre. She is puzzled over the number of children in the area being brought into the centre with skyrocketing temperatures. At the same time, there are a series of mysterious deaths all over the town.

The endurance of the Children of the Corn franchise surprises one. For a story that runs to only 11,000 words – a total of sixteen pages in print – it is amazing that so much has been able to be dragged out of so little. The story does little more than introduce the town of Gatlin and the sinister child cult that worship He Who Walks Behind the Rows – King does not even offer any explanation of why the children took over the town or what the entity in the cornfields is. Despite this, we have managed to have so far ten films spun out of the story – which averages about fifteen pages per film!

The frustration about Children of the Corn: The Gathering is that it is impossible to make sense of what is going on without having any of the other films to refer to. All it seems to be is a series of things happening and novelty deaths every so often without any kind of rationale – there is some talk about infection through rising body temperatures as the kids are brought in but no explanation of why. There is not even the usual stuff in the other Children of the Corn films of kids rebelling or talk about entities in the cornfield. This sort of tries to give us an origin story – although one that completely contradicts the origin stories that were offered up in Children of the Corn II.

The first half is peppered with random dream jumpshocks – always a signal a film is trying to get scare us because it has nothing else in its arsenal – that never seem to relate to anything that subsequently happens. In between that, we get various deaths of characters – none of which are terribly interesting. The film provides some mildly amusing meltdown effects at the climax but then the whole showdown is over in almost no time.

The fascination that Children of the Corn: The Gathering has in retrospect is that it was one of the earliest film roles from Naomi Watts (her first leading role in a US film) at a time when she was an unknown just arrived from Australia and was not the A-lister and multiple Academy Award nominee she was after being propelled to the spotlight a few years later in David Lynch’s Mulholland Dr. (2001).

Director/writer Greg Spence only ever went on to direct one other film, another sequel with The Prophecy II (1998). He mostly works as a tv producer, most notably on Game of Thrones (2011-9).