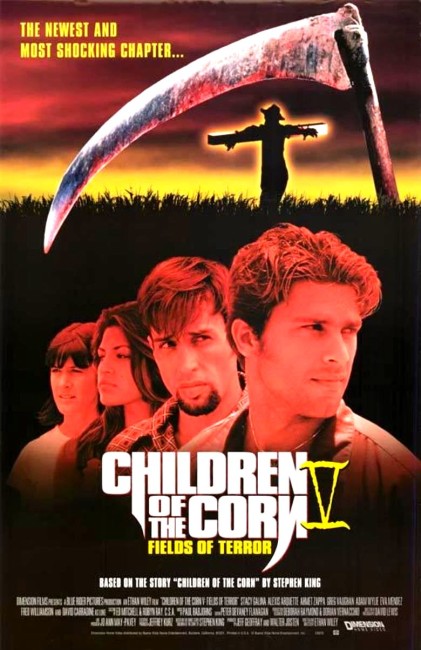 Six friends are on a trip to disperse the ashes of a dead friend. Two of the friends travelling in their own car are attacked after stopping and wandering into the cornfields. The others skid off the road and put their car out of action. They are then forced away by the appearance of a group of threatening children who worship the entity known as He Who Walks Behind the Rows. With no help available in the nearby town, they settle in to an abandoned farmhouse to wait for the bus out of town in the morning. Alison then discovers that her brother Jacob may have joined the children they encountered and sets out to find him. Jacob meanwhile has been earmarked as a sacrifice on his eighteenth birthday.

You are left wondering why so many people keep watching these Children of the Corn films in sufficient quantity to make it profitable enough for the filmmakers to keep churning out more of them. The original story concerned a group of kids who have killed all the adults in a town worshipping a never-seen entity that lurks in the cornfields. King did nothing to explain the set up in his story and the films have only repeated the basics and done little to place any more meat on the bones of the premise than that.

Ethan Wiley at least makes a better film than at least the previous two entries in the series. He is neither distracted by the need to throw in bizarre makeup effects or go absurdly over-the-top like the third film. The downside is that without the novelty death set-pieces and makeup effects grotesqueries, nothing much happens in Fields of Terror up until the last quarter of the film. Even then the image of people throwing themselves into a grain silo as He Who Walks Behind the Rows manifests as a burning flame seem underwhelming.

Perhaps the most interesting expansion of the basics of the series that Wiley offers is to show the children’s religion in operation where it is essentially centred around a farmhouse where they seem to live in some type of communal existence. We do get David Carradine in a few brief scenes as the adult at the centre of it (the other films have the children kill off all the adults) and the implication that he may even have founded the religion and that this has conferred some kind of immortality/longevity. The most entertainingly bizarre effect that Wiley pulls off is when David Carradine’s head splits open and emits a beam of light that blasts a hole right through sheriff Fred Williamson’s head, reducing him to ash.

The film certainly has an eye-opening cast, including an unknown Eva Mendes (still being billed as Eva Mendez) before her breakout success in Training Day (2001); the late Alexis Arquette before he underwent gender-reassignment with a goatee as one of the party; David Carradine as the cult leader; 1970s Blaxploitation star Fred Williamson as the sheriff; horror icon Kane Hodder in a single scene appearance as a bartender; even Frank Zappa’s son Ahmet as one of the victims wielding an inflatable sex doll in the early scenes.