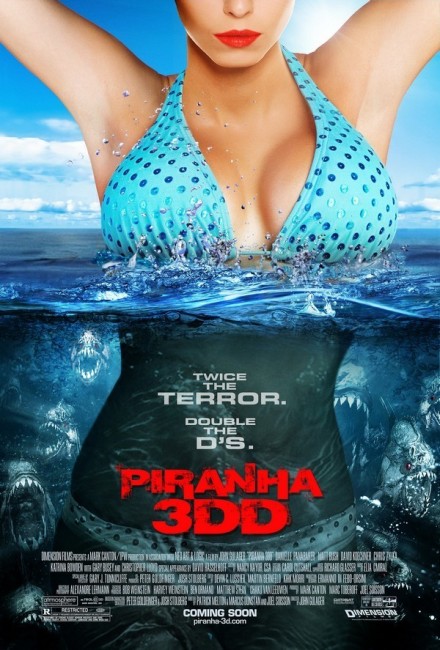 Marine biology student Maddy returns home and is shocked to find that her stepfather Chet has turned the waterpark that both of them half-inherited from her late mother into something sordid, hiring strippers for lifeguards and adding an adult area. The prehistoric piranha that attacked Lake Victoria now emerge from an underground lake where Chet has started unlawfully drilling for water to supply the park. While at the lakeside, Maddy and a friend are attacked by one of the piranha. Maddy tries to persuade Chet of the threat posed by the piranha but he refuses to listen. However, as his big opening featuring David Hasselhoff as a guest lifeguard nears, the piranha emerge up the drilling pipe and into the pools.

Piranha 3DD is a sequel to Piranha (2010), Alexandre Aja’s updating of Joe Dante’s quirky B-budget hit Piranha (1978). Aja planted tongue in cheek and served up a gleeful array of naked breasts and gore in an absurdly entertaining mix. The original Piranha had also produced a sequel with the film that James Cameron would rather forget Piranha II: Flying Killers/Piranha II: The Spawning (1981), as well as another largely forgotten tv movie remake Piranha (1995).

By the time of Piranha 3DD, Alexandre Aja has departed and the director’s chair has been handed over to John Gulager, the son of actor Clu Gulager (who can be found here as the old timer who accompanies Gary Busey during the opening scenes). John Gulager had previously directed the Project Greenlight film Feast (2006), an engaging deflation of monster movie cliches, as well as two sequels Feast II: Sloppy Seconds (2008) and Feast III: The Happy Finish (2009), and subsequently went on to make Zombie Night (2013) and Children of the Corn: Runaway (2018).

The script is written by Marcus Dunstan and Patrick Melton who were responsible for several of the Saw sequels and The Collector (2009). Also present as co-writer and co-producer is Joel Soisson, someone who seems to specialise in making sequels to other people’s films via his Neo Art & Logic production company with the likes of several Hellraiser, Children of the Corn, The Prophecy, American Pie and Mimic entries, Highlander: Endgame (2000), Hollow Man II (2006), John Gulager’s Feast films and the Pulse series.

Piranha 2010 was known as Piranha 3D in the promotional material (although not in its title up on the screen). The sequel amusingly signals the expansion of that by in effect going up one cup size and calling itself Piranha 3DD. This is essentially the pitch that Piranha 3DD makes – the same as before but with bigger (or at least more) breasts. You get the impression that John Gulager was given orders to replicate what went on in the first film – but deliver more of it. Thus we have plenty of jiggle shots with topless (and a few bottomless) girls coming down waterslides, emerging from pools, sunbathing and so on.

There are more shots of the piranha emerging out of the 3D screen – where the sequel tries to one up the previous film by including not just one piranha coming out of the screen but entire shoals of them. Indeed, Piranha 3DD makes far better use of the 3D environment than some recent bigger budgeted films such as The Avengers (2012) and Men in Black 3 (2012) – even if most of the 3D effects are no different to the ones in the first film (although we do get the crass effect of seeing someone vomit in 3D glory).

At the same time, Piranha 3DD gives the impression that it has been shot on a lesser budget – the location is scaled down from a lake resort to a mere swimming pool, while the running time hails in at a surprisingly brief 83 minutes (ten minutes of which are padded out with blooper reels over the end credits).

What Piranha 3DD never seems to get right is Alexandre Aja’s tongue-in-cheek touch. The scenes with the teenagers making out, the bare-breasted beauties lounging by the pool seem to straddle a line where you cannot be sure whether the film is parodying this (as Alexandre Aja was) or if John Gulager is going straight for the frat boy demographic without any appreciable irony.

The sequel is at its most ridiculous when trying to replicate the more outrageous scenes from the original – like where it tries to do a variation on the scene where Jason Bateman gets his dick bitten off with a scene here where Katrina Bowden asks Jean-Luc Bilodeau to take her virginity and then in mid sex starts convulsing and he pulls out of her with a piranha attached to his dick and then concludes that the only option to save himself is to cut his dick off with a kitchen knife. It is a scene that looks as ridiculous as it sounds – this is a film that can manage in straight-faced to offer up the line: “Josh cut off his penis because a piranha came out of my vagina.”

Similarly, there is another scene where Danielle Panabaker is in the bath – a sequence undeniably modelled on Heather Langenkamp’s famous scene in A Nightmare on Elm Street (1984) – and the bath is invaded by piranha from out of the tap, before this is revealed to be a dream sequence. Or a scene at the end where David Koechner’s head is severed by a flag cable and flies through the air to land between a strippers’ breasts. In the very act of becoming a sequel, Piranha 3DD feels exactly like a story that was funny first time around that becomes belaboured in the retelling.

The film gets its greatest mileage out of the appearance of David Hasselhoff as himself. Hasselhoff has given all impression in the last few years of having entered into the same territory that William Shatner did about a decade ago – accepting his frequently derided limitations as an actor and going for broke to engage in a self-aware mocking of his persona. Hasselhoff’s wry asides and constant self-deflation prove to be one of the more amusing things about the film, even if the rest of the show never hits the stride of its predecessor.