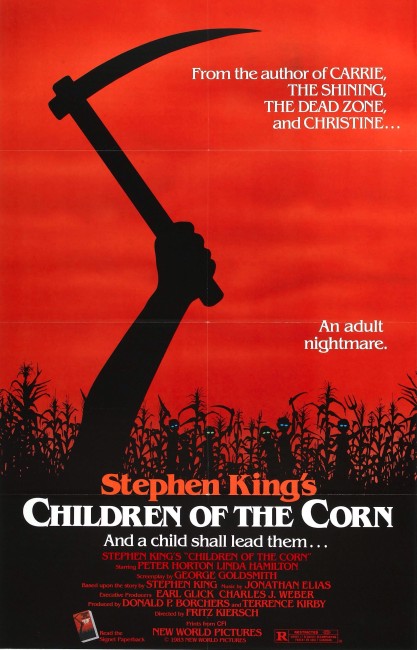 Newlyweds Burton and Vicky Stanton are driving through the cornfields of Nebraska on their honeymoon when they accidentally run a child down. However, upon examining the body they find that they did not run the child down but that its throat has been slit and the body thrown in front of their car. They drive on to the nearest town Gatlin, despite being warned away by a mechanic who is killed immediately after they leave. Once in Gatlin, they find the town deserted and overgrown. Vicky is then captured by children. As he tries to rescue her, Burton discovers the children have killed off all the adults in the town and established their own puritan church, offering human sacrifices to a demonic presence they call He Who Walks Behind the Rows that inhabits the cornfields.

Children of the Corn (1977) may not have been one of Stephen King’s best short stories but it worked as an effective mood piece and had a good twist ending. This film adaptation of the story came as part of the spate of Stephen King adaptations that came out circa 1983-5. Alas, Children of the Corn is not a very good Stephen King adaptation. The film has tossed out the story’s twist ending in favour of more upbeat heroics, although the essentials of the rest of the story are kept.

Children of the Corn suffers for once from being too faithful to the short story – in the sense that it retains the basic elements of a fifteen-page short story but fails to expand out on any of the ideas. The film has to pad the story to fill out its 93 minutes but instead of offering any explanation about the social background or what it is in the cornfields, all the padding consists of is much running around and getting lost on the part of Peter Horton and Linda Hamilton, which becomes repetitive and tedious. This is a shame as there are many interesting elements in the film’s story – patricide, paganism, puritanism and clairvoyance. However, none of this particularly gels conceptually or gets any type of adequate explanation in the treatment here. The children’s social order, in particular, lacks any credibility. John Franklin and Courtney Gains as the two leaders both have striking presences but both lose it whenever they open their mouths and the dialogue falls thuddingly flat.

Fritz Kiersch made his directorial debut with Children of the Corn (although has since failed to go onto anything other than directing throwaway video fodder). His direction is surprisingly often better than the effort warrants – the collision with the body and a dream where it returns to life are two vivid moments. Unfortunately, the rest of Children of the Corn evades his touch. It is simply that there is not enough story there for him to do anything with. Jonathan Elias’s score does an effective job of ripping off The Omen (1976). A far better version of the same basic idea of a town where children have turned and killed the adults can be found in the Spanish film Who Can Kill a Child?/Island of the Damned (1976).

Fritz Kiersch’s other films of genre interest are:– Gor (1987), an adventure set on a barbarian planet; the psycho-thriller Fatal Charm (1990); the revenge film The Stranger (1995); and The Hunt (2006) about human hunting for sport.