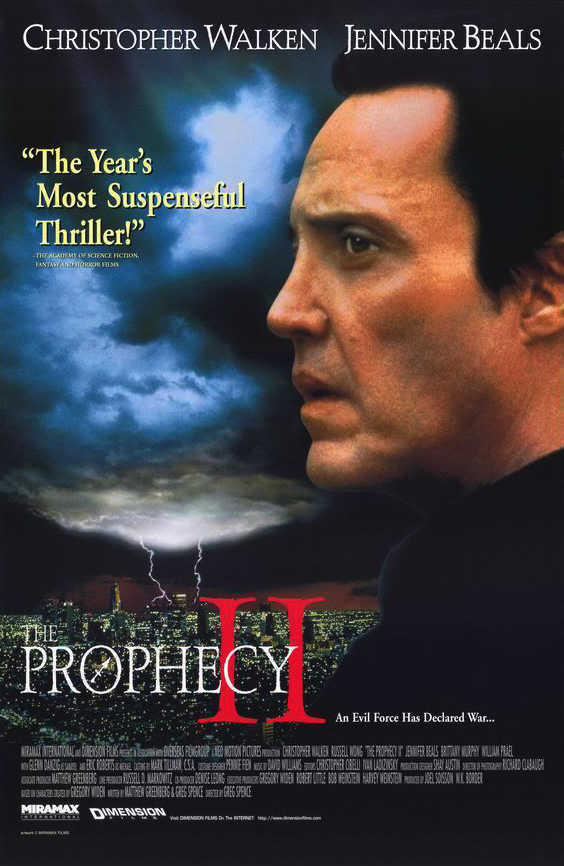 Nurse Valerie Rosales is startled when a man, Danyael, falls onto the hood of her car from out of nowhere. She takes Danyael to the hospital where she works and in no time he charms and seduces her. After sleeping with Danyael, Valerie finds the very next day that she is several months pregnant. At the same time, Gabriel makes a return to Earth and starts trying to find Valerie in order to kill her. On the run, Valerie discovers that she is pregnant with a nephilim, a half-human, half-angel, that is destined to unite the warring factions of Heaven.

The Prophecy (1995) was a superb little sleeper – a genre film that built up through an intelligent and thoughtful script rather than schlock effects. It failed to do much in theatrical release but fared better in video release, enough to give birth to four sequels, of which this was the first.

Almost all sequels suffer from the creative drain of having to repeat what made the original a success and the fallacy that bigger budget makes for a better film. The Prophecy II suffers both of these problems. It has a bigger budget with which it attempts to produce more in the way of effects and car crashes and the like. However, The Prophecy series is not an effects driven one – the first film’s success was all cerebral not visceral. In Prophecy II‘s favour, it is still an ideas film to a large extent. There are some nifty images – like a visit to the Garden of Eden located in the midst of an industrial wasteland.

It is also a sequel that has the tendency to cruise by on the assumption of familiarity with the original, resulting in a script where we have a number of angels running about and fighting, humans being incinerated and impregnated and so on, but it is well into the film before we find out why any of this is happening. If someone came in without having seen the original, it would be a difficult film to follow coherently.

The Prophecy II‘s greatest coup is being able to score an encore performance from Christopher Walken. And Walken is, as he was in the first film, hilarious. He gets the best dialogue in the film. After a punkette (Brittany Murphy) and her boyfriend drive their car into a wall in a suicide pact, he approaches the dazzled survivor girl: “I need your help. I’m short-staffed. Don’t worry about him [the dead boyfriend] – he’s just taking a dirt nap.” Upon finding out his reasons for keeping her alive, she reacts: “You’re keeping me alive because you don’t know DOS?” There’s an hilarious scene in a cafe where she shoots herself to no effect and Christopher Walken leans in: “I think we’re having a communication problem.” Walken and the part are in a class apart from the rest of the film. Jennifer Beals is okay but a greying Eric Roberts is badly miscast as a beatific good angel, his characteristic drawl seeming out of place to say the least.

Christopher Walken also appeared in one further sequel The Prophecy 3: The Ascent (2000). There were two subsequent sequels, The Prophecy: Uprising (2005) and The Prophecy: Forsaken (2005), made without him.

Director/writer Greg Spence only ever directed one other film, another sequel with Children of the Corn: The Gathering (1996) and nothing subsequent to this. He now mostly works as a tv producer, most notably on Game of Thrones (2011-9).